Changing Allegiances and the Perils of Autumn Birding

It has been blowing a hoolie here. Strong winds laced with cold rain. Miserable. Our guests are still here, so rather than abandon them I stayed inside where it was warm. I wrote my next Birdwatch article, but by early afternoon I was climbing the walls, and decided to head out early on the school run to check the ponds in Wanstead Park.

At this time of year, I begin to change allegiances from the Flats to the Park. The Flats are excellent, and my Flats list has more birds on it than the Park, but it suffers from a lack of ponds. The Park on the other hand has five fairly substantial ponds, many with overgrown margins, and as winter approaches, I start thinking waterbirds.

So, braving the inclement conditions, I headed over to check them out. At about this time last year a female Goldeneye appeared in similar weather, and indeed Gary had found one this morning on the Hollow Ponds up in Leytonstone, a stone's throw away. As I got out of the car, my cap blew off; I felt confidenent. My confidence was increased further by a drake Teal on the Shoulder of Mutton Pond. The 22nd I have ever seen here in the six years I've been watching. Reliable, but far from common. On Heronry I espied another Teal, female this time. Hmmm, I wonder?

Sadly that was as good as the ducks got, but it's still early days, and those Teal could easily stick around. Bad thoughts of January 1st are entering my head at this point.... I continued my walk past Heronry and on towards the Ornamental Waters. I walked the southern arm in the hope of finding any sneaky wildfowl hiding there, but my attention was diverted by a decent-sized flock of Long-tailed Tits. I trailed them through the trees to the Grotto, where they began to mingle with some Goldcrests in the yews there. You'll struggle to believe that Long-tailed Tits and Goldcrests are deafening, but I can tell you that underneath the shelter of the enclosing trees is felt pretty loud. Yet above it all I could hear snatches of a different call, an instistent piping, more breezy I thought. And sure enough, though it took twenty minutes as there were so many mobile birds to look through, a Firecrest popped up briefy. Not long enough to work out male or female, but long enough to see a bold white eye-stripe. A cracking bird (Firecrests are always cracking), and I always think that they're a proper patch-birders' bird. 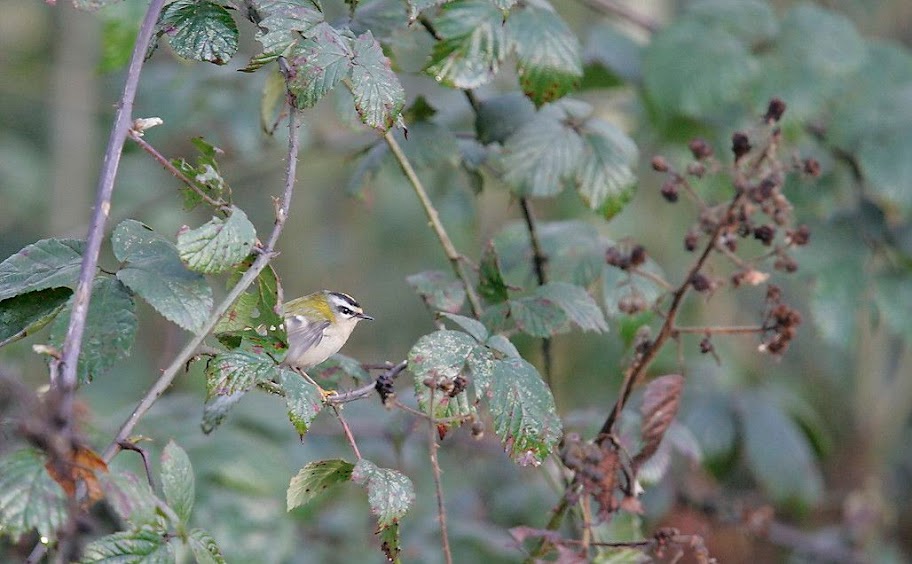 For illustrative purposes only. This was taken in the Park last year. No camera today, too wet.

Cheered by this find, I left the park, for school beckoned, and headed up to the Basin. I parked carefully on the verge, and stepped down onto the leaf-covered grass. I hadn't gone more than about two steps when I became aware of that all too familiar squishy slipping sensation. I looked down, and sure enough, I had planted my boot firmly into a huge turd. Dog owners are truly the scum of the earth, unbelievable. Autumn is the worst season, as the fallen leaves obscure them from view, and seeing as I manage to unfailingly tread in them when they're in plain view, frankly I don't stand a chance.  I spent about five minutes scraping my boot against the curb, against long grass and so on, but when I got back in the car the whiff was unmistakeable. It took a puddle near the school, and even so I fear that a twig will still be necessary. After all the vomit from my neice earlier in the day, I couldn't face it, and so my boots are in the porch awaiting a hoped-for visit from the boot-cleaning fairy.

Posted by Jonathan Lethbridge at 18:18