The importance of writing

I am bowled over. Not to often I can say that, but as I am off to Australia tomorrow for the sad event that is James' funeral, I found and am re-reading my trip diary from 1998, to remind me of people and places. I had just graduated, and had buggered off to Australia before starting work in the City (booooooo!), and he and I drove a 30yo camper van from Sydney to Cairns and back over the course of a couple of months. It was an amazing trip, but that is not why I am bowled over. It's because, somehow, back in my unkempt and frankly lazy youth, I managed to keep a diary, and diligently wrote it every day. How very mature, have I aged in reverse? I couldn't do that now. I mean, blogging is all very well and good, but it is no substitute for a proper diary. This has dates, locations, people, little hand-drawn maps, I even wrote the day of the week down. It is in a cheap spiral-bound notebook, and the inside front cover has card games scores and a trip budget on it, you know, who bought the petrol and beer etc, and it is most definitely not going to win any literary awards. But it is clearly me writing it, that much I can recognise, the same flair, that same elan, nothing has changed in the intervening decade. How about this morsel:

Day 20. 23/07 Thurs
"Van of Happiness in tip-top condition for the measly sum of 137.50 (Aus $) Woohoo! We prepare to leave. Pack pack pack, clean clean, pack etc. Van becomes incredibly tidy. Keith says it'll get us to Cairns. We piddle about all morning and at 2pm are ready to leave - minus some shopping"

Perhaps the Whitbread? (As I was googling whether Whitbread had an "a" or I not I just discovered it is now called the Costa Prize, how terribly tragic)

But the real value is in the birds. Apparently even 10 years ago I was writing down what I was seeing. This is a godsend to the newly obsessed lister:

"Coffs - a footnote. Delia has planted bird-friendly plants in her garden so I was in heaven. I saw - spangled drongo, little wattledbird*, eastern spinebill, rainbow lorikeets, honeyeaters, little lorikeets, magpie larks, black-faced cuckoo shrikes, and much, much more."

I'm only 2 weeks into the diary, and already I have found dates for a pile of birds I knew I had seen, but didn't know when or where, and have added 3 birds to my life list (* not the Little Wattlebird though, bad ID; it only lives in South-west Australia and I have never been there - most likely a Red Wattlebird, which I already had down. Slightly destroyed the magic there). Like I said, I was so bowled over, I had to stop reading it and come and write this whilst my thoughts of wowness were still fresh in my head. 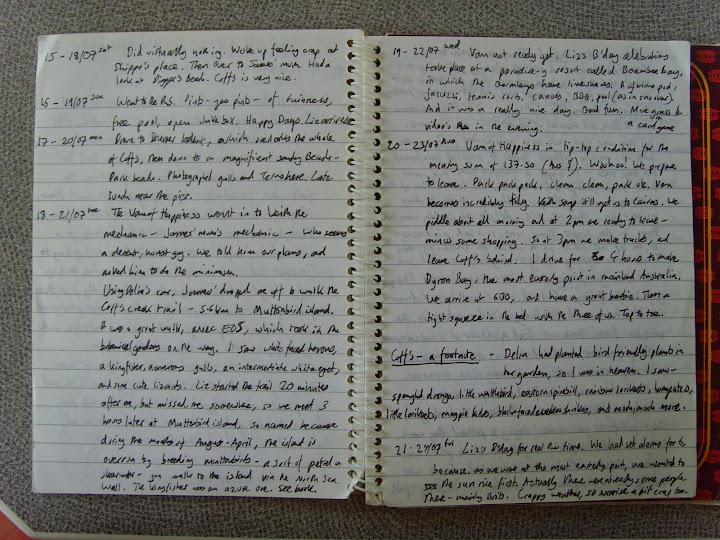 So I have now packed a notebook, and I'm going to diligently write up each day that I am over there, and I may even continue it when I get back, there is no subsitute for writing, and we should all do it more. Real writing though, with pen and paper. Reading this Aus trip now, in my crappy black scrawl, I am transported back to specific locations. Memory is incredibly acute sometimes, but it needs a prompt. This morning I could not have told you where I saw my first Laughing Kookaburra, but having read the entry from July 13th 1998, I can tell you that it was in St Albans, in the Hawkesbury River Valley in NSW. I can very clearly visualise the location where we had parked the van, recall what we were doing (attempting to dry the washing), and remember being really excited at seeing these two Kookaburras in a nearby tree, and failing to sneak up on them for a photo. I don't remember leaving my towel on a fence, but the diary doesn't lie. Except about Little Wattlebirds.

EDIT, 2 hours later: The Little Wattlebirds Anthochaera chrysoptera have been bugging me. So I did some research and my field guide is quite inaccurate for the distribution for this species. Whilst it does live in SW Australia, it also lives on the east coast, and likes Banksia, of which there were many in Delia's garden. So there we go, the magic is restored, and the diary does indeed never lie.

Posted by Jonathan Lethbridge at 12:53