Finally a day when we didn't have to travel anywhere! Although the distances we had to cover between Medellin and Pereira were not long in terms of miles, the mountain roads were in generally abysmal condition, with many landslides and other collapses, and a seemingly endless succession of contraflows and outright halts, sometimes for 20 minutes or more. Some of these roadworks were so establised that marketplaces had sprung up around them, with enterprising locals sellings tamales, arepas, other snacks and cold drinks as you waited. Some of our transfers ended up being well over three hours - we tried to do some of these before first light,  others during the middle of the day, but they nonetheless ate up a good portion of the trip. I am quite stupid in that I don't stop birding during the hottest part of the day, and push on regardless. In Costa Rica there were enforced halts after lunch at the lodges, but rather than take a siesta I would toddle off with my camera to some feeders. If I don't come back shattered from a trip I have not been doing it properly!

Anyway, this morning all we had to do was wake up at a sensible time and start birding immediately. In a neotropical paradise. Life is tough sometimes. After a quick breakfast it was time for the first Antpitta site, very close to the lodge. Miguel was our local guide for the day, and along with Alejandro and the gang we filed into the forest in what was a now familiar routine. I honestly cannot remember if the Bicoloured Antpitta had a name or not, but as with the others it was rather a star and came in more or less immediately. 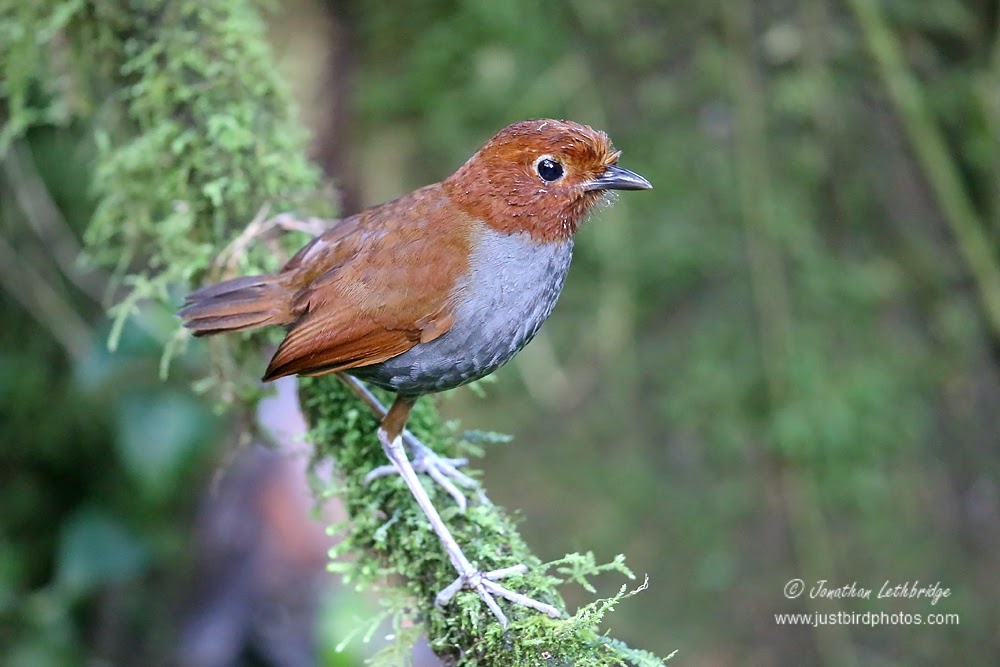 We did not spend a great deal of time here, the bird would come in and take the worm and disappear with it straight away. Perhaps feeding young nearby? We carried on up the track to the next delicacy. This time the Antpittas couldn't even wait, and had come out of the forest to ask what the hell was going on, why we were so slow, and that they were hungry and could we just get on with it. Always nice to get assaulted by a Chestnut-crowned Antpitta first thing. These were fantastic birds (Pancho and Pancha), and for photography it was the best yet, nicely open and with good light. In addition to insatiably scoffing down worms, Pancho found a massive beetle and smashed it to bits on a branch until all the innards leaked out - nice to see at least some natural behaviour. 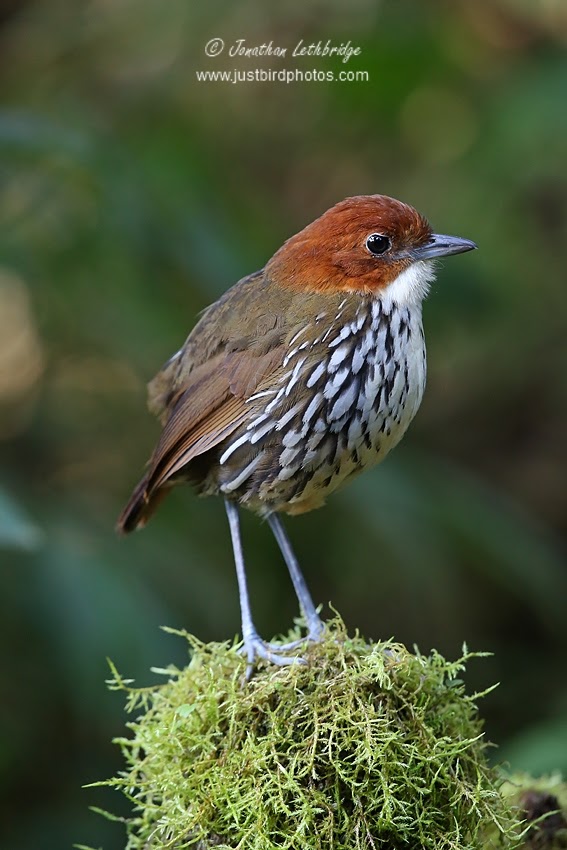 The rest of the morning was spent slowly walking up the track deeper into the reserve, though in truth we barely penetrated it in the time we had. At the top where it splits we hit a bird wave - this is one of the most exciting things that happens when birding in the tropics, but also the most stressful when you have little idea what you are looking. It was a case of just try and get onto the birds one by one as Alejandro and Miguel called them out. I cannot recall the full list, but there were several Pearled Treerunner, Tyrannine Woodcreeper, Beryl-spangled Tanager, Capped Conebill, Streaked Tuftedcheek, Black-capped Tyrannulet, Cinammon Flycatcher and Barred Becard. It was non-stop, and although it felt like about half an hour I suspect it was a lot shorter than this.

Once we had calmed down and recorded everything we had just seen, we turned right and past the finca. This is where Jazmin and her family lived. Through the gate and ane of the first birds we saw was Golden-plumed Parakeet, a small noisy group feeding close to the track - not something we had expected to get good views of. We also got decent views of Bar-bellied Woodpecker near here, and further on, also Crimson-mantled Woodpecker. It was all rather spectacular, and we only really scratched thr surface - other than the mixed flocks you can go for long periods seeing and hearing very little. Naturally we wasted ages trying to see Tapaculos. I think Dave managed a brief glimpse of Ash-coloured Tapaculo through a tiny window, the rest of us saw nothing. And the less said about Occelated Tapaculos the better, looking back it seems half the trip was spent hearing this bird call from a steep slope.

We came back to the lodge for late morning, this was the appointed time for humans to turn up with worms for a Brown-banded Antpitta. This bird was a new entrant to Team Antpitta, only on the roster for a few months and as such quite shy. Still, our sixth Antpitta of the trip which already felt incredible.

After lunch we took a short pause - our first siesta! Not me though - around the back of the lodge were some fruit feeders, and I pulled up a chair..... Luckily there was also a shelter, a corrugated roof, as it soon began to hammer down. A lot of my photos have significant streaks of rain in them! I saw 16 species from my seat during the hour and half I spent here, including superb views of Blue-capped Tanager and Blue-winged Mountain Tanager. Eventually the rain eased and we regrouped to go back up the track for another fruitless go at Occ Tap. The rain didn't stay away for long though, and it was not long before we were sheltering under some trees. I say sheltering, there is very little you can actually do in rain this intense, particularly without an umbrella - note to self; a small umbrella is a crucial bit of neotropical kit! We made our way back to the Finca for some proper shelter to find the family playing "Rana" (Frog!) under the veranda. This is a game a bit like hoopla or shove ha'penny, but thowing coins or rings into slots which have different values. Dona Jazmin and Don Carlos were there with other members of the family, and of course Ernie was involved too! We were kindly given some coffee and were able to dry out a bit. Eventually the rain eased sufficiently to go back into the forest, but it was quite quiet, even the Occelated Tapaculo had given up! We tried for Nighthawks at a cleared area, hearing one distantly but only once. We came back in the dark, a long day, but a very satisfying one despite the rain check. Frustratingly a large Owl species flew across the track that we were not able to identify.