We were up early again, this time with luggage as we were moving sites. Jeeps abandoned, we were back in the comfort of Ernie's van, headed for Manizales and the reserve of Rio Blanco. But first there were some lowland specialities to try and find.

After breakfast at La Mayoria, Penalisa, which itself had a decent selection of birds, we took the road towards Quibdo (RN 60) for a few kilometers. Our targets here were some classic endemic  or near-endemic lowland birds - Greyish Piculet, Apical Flycatcher, and the highly sought-after Antioquia Wren. We drove along slowly until Alejandro heard one out of the window - yes, this is how birding goes somehow - and we all piled out. The Wren was an absolute bugger to see, seemingly right in front of us yet completely invisible. It must have had Tapaculo genes. We got there eventually, getting some good views. This bird was only discovered in 2010, and described in 2012 as a split from Rufous-and-White Wren. Needless to say I was unable to get any photos of it.

We stayed birding on this short stretch of road for about an hour as it seemed highly productive. Not only did we also get the Piculet and the Flycatcher, but also Squirrel and Striped Cuckoos, Black-crowned Antshrike, both Caracara, Yellow-backed Oriole, Superciliaried Hemispingus, Slate-headed Tody Flycatcher, Streak-headed Woodpecker and various Warblers and Tanagers. A Blue-headed Parrot flew over there were some more Colombian Chachalacas in some roadside trees. We had cleaned up and it was not even 9am.

This being the case Alejandro suggested we advance the itinerary and depart for Manizales in order to have some of the afternoon birding Rio Blanco. I was actually against this as there were so many new birds for me in this habitat and the original plan had been to bird for at least half the day here. However there were no endemics, and as the others had seen most of what was on offer in other South American countries on previous visits their preference was to move on. A shame if you ask me, but majority rules I suppose. It was a long drive, over three hours to Manizales. We had lunch just before we reached the town, at a restaurant overlooking the valley. More birds here, including lots of White-collared Swift, our first Rusty-margined Flycatcher, and a Golden-faced Tyrannulet. 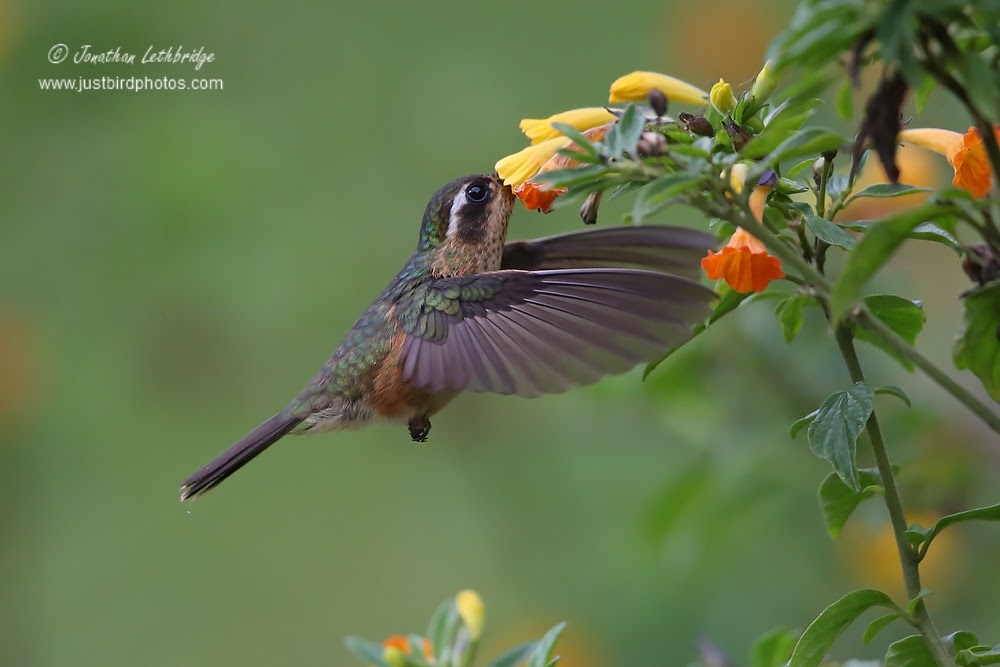 Rio Blanco sits in the watershed above the town, and was set aside to preserve the water supply. At the main gate is a waterworks, and this was our first stop. The flowering bushes here held plenty of Hummingbirds, including the main target of White-billed (aka Choco) Daggerbill. There were also White-bellied Woodstar, Fawn-breasted Brilliant, an Andean Emerald and Buff-tailed Coronets. We also had good views of Chestnut-bellied Chat-Tyrant, a species that we had heard but not seen the previous day.


It was about half an hour up to the Lodge, a birders paradise by any measure. There were ten species of Hummer at the feeders here, with Mountain Velvetbreast, Tourmaline Sunangel and Bronzy Inca all being new. Brown-bellied Swallows were nesting under the eaves, and Lacrimose Mountain Tanager and Blue-and-Black Tanager were around the fruit feeders. A short trip further up the trail did not produce a great deal, but we did see our one and only Andean Guan by the side of the road. After a great dinner prepared by Jazmin we hit the sack. We would be going further into the reserve tomorrow. Oh, and there were some Antpitta feeders... would they deliver as the previous ones had?