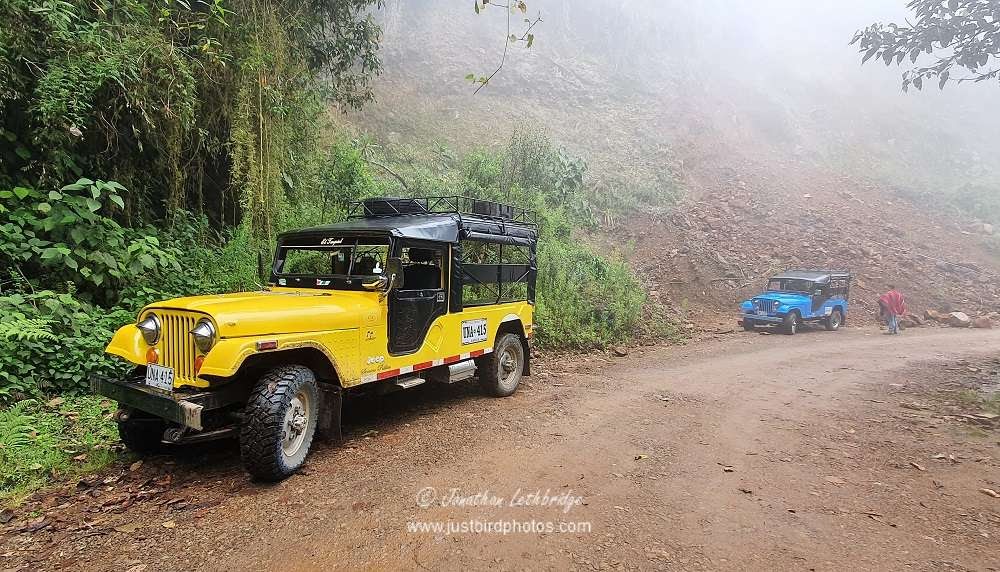 The jeeps arrived for us at about 4.30am. This would happen frequently on this trip - a drive in the dark to get to the best birding spot for first light. In this case Alejandro wanted to be at a certain spot in order to witness the morning commute of the rare Yellow-eared Parrot. This meant bumping up a track for about an hour and a half to get a view point. I say a track, but actually this was the minor road between Jardin and Riosucio, and was a vital transport link for many people who live and farm in the region. We may have found it tough going in 4x4s, but a large and ancient bus regularly makes the journey, blaring out Andean music all the way - La Chiva! 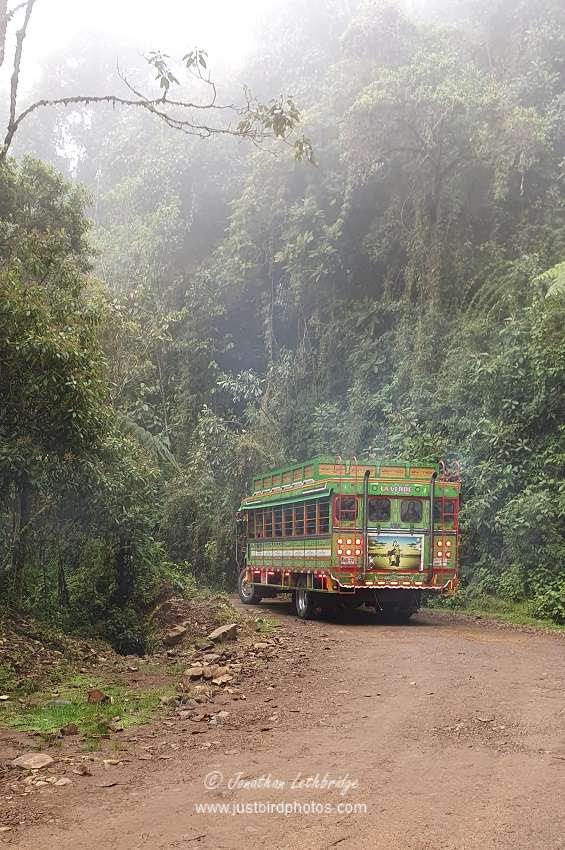 We were slightly delayed arriving at the spot by some Antpitta excitement, a Chami Antpitta on the track ahead our [lead] jeep. It bounded away quite quickly but we all saw it, including Dave and Richard in the rear jeep. I can only imagine the scenes! At a more open area we stopped and got out to stretch our legs and start birding properly. It was in semi-coud, with the visible distance being quite variable. It was not long before the first Parrots flew over - very distinctive and a near-endemic if not now totally endemic given how much the range has shrunk with the clearing of their essential Wax Palms (Ceroxylon). They were only rediscovered here in 1999, having been thought extinct. Also here was a Tyrian Metaltail, a Broad-winged Hawk, and several Great Thrushes. Even more excitement was to come though, with Alejandro's keen ears picking out a Slate-crowned Antpitta. This gave excellent if brief views by the roadside a short while later. We could scarcely believe that we had seen two Antpittas in the wild in the first hour of the day! On the other side of the road we saw our first Sharpe's Wrens, fabulous rufous birds, as well as Lacrimose and Hooded Mountain Tanagers. Around here we also had our first experience of heard-only-no-matter-how-hard-you-try Tapaculos.

Breakfast beckoned - a declicious mixture of eggs, arepa, cheese and fruit at a roadside restaurant, in fact the first building we had seen since getting up into the cloud forest.  There were already a number of western birders there, presumably for the same reason we were, and invigorated we moved onto the main course - Antpittas! We were here because a large number of Antpittas had been enticed out of the jungle with the promise of worms and trained to parade in front on birders. We followed Martin, Antpitta Whisperer and carrier of worms, up a tiny track into deep forest. I had never visited an Antpitta feeding station before and was not sure what to expect. In a clearing we found a small number of benches for people and small number of mossy logs for Antpittas. We assembled in hushed silence, the moment was upon us. Shhhhh, quiet now.
"Linda!!!"
"Belleza!!!"
You what? You mean you can give an Antpitta a name and call it in? Martin continued calling and whistling whilst flinging worms onto mossy logs. Yes, yes you can. Before we knew it a Chami Antpitta was on the log stuffing worms into its face. This was Linda. Then another one arrived, also called Linda. Hey, this is 2022, a male Antpitta has every right to be known as Linda if it wants. Belleza, a Chestnut-naped Antpitta, was playing hard to get, but eventually the lure of the worm proved too much and he/she/it also hopped into the clearing. We were not done yet though, a Slate-crowned Antpitta, sadly anonynous, also came in, but was immediately chased away by Belleza. There is apparently a hierarchy amongst Antpittas. Shy and retiring, very difficult to see, elusive, and hopping around our feet. Astonishing. 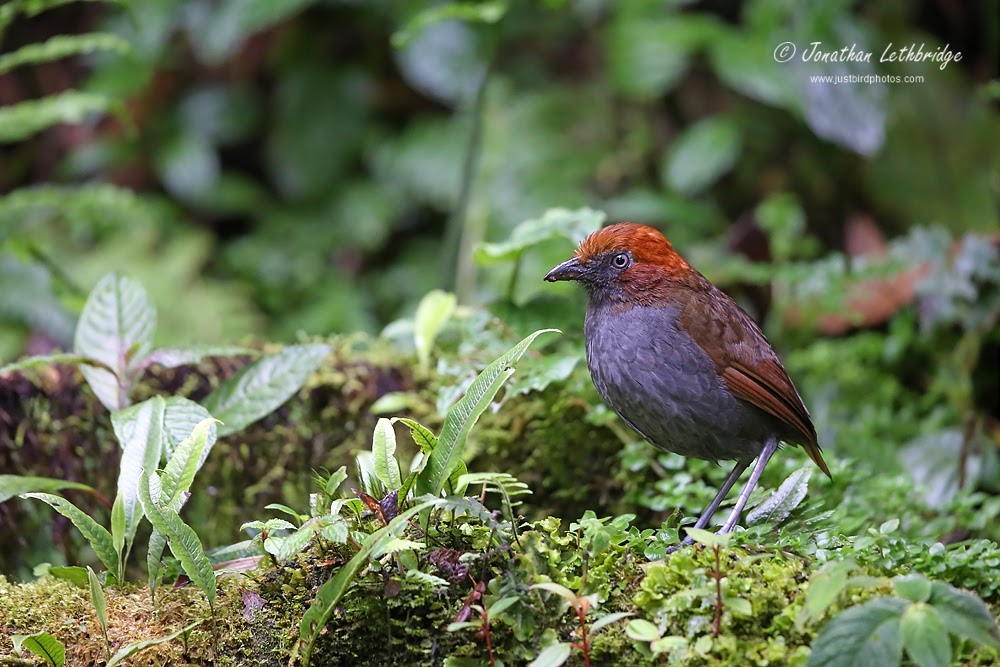 By now it was lunchtime, and so we went to Martin's house a little further up the hill. Overlooking the range, the place was pure paradise. Hummingbird feeders, fruit on branches, millions of perches, and birds everywhere. Rain was setting in, cloud covering the moutainside. Further birding in the forest wasn't possible, but there was so much activity chez Martin that it didn't matter. I have no idea how many photos I took - too many. And with the cruddy light and misty conditions a lot of them required a fair amount of work to bring them up.

Eventually we dragged ourselves away and piled back into the jeeps to head back down to Jardin. Fortunately at lower altitudes the clouds cleared and we were able to resume birding and not see some more Tapaculos. The list of birds from the day is long and glorious, and includes a load more Tanagers, Furnarids, Flowerpiercers, a Plushcap, Golden-fronted Redstart and so many more that are etched in my mind. Such is birding in a rainforest that I got photos of barely any of them, but I can still remember them all as if it were yesterday. 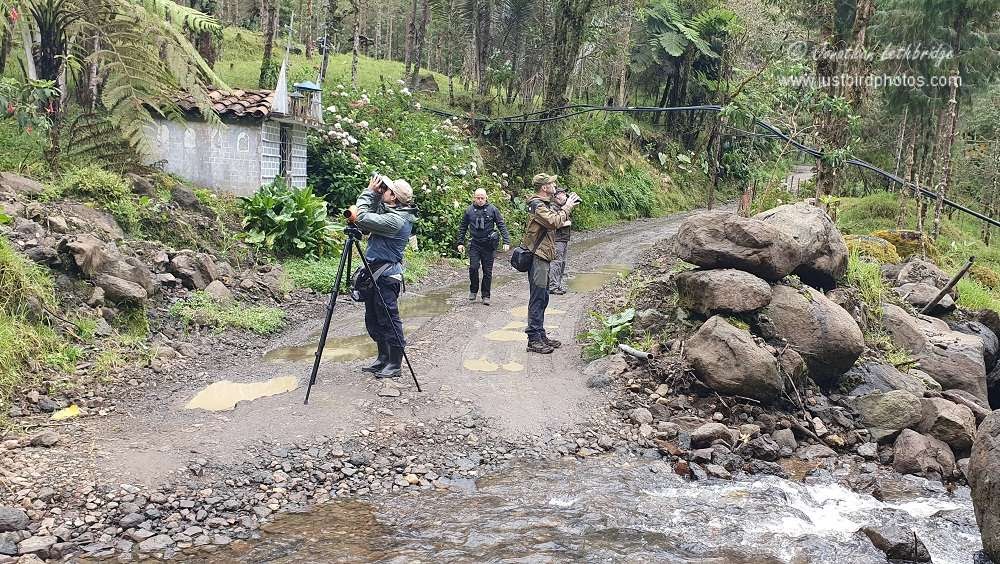 Posted by Jonathan Lethbridge at 09:00