Why counting Gulls is bad

Yesterday I had a leisurely stroll around the patch. Ideally I would have seen the Common Sandpiper from within the patch, but unfortunately both it and I were slightly beyond the Gates of Mordor. The gates mark the very arbitrary patch boundary within the Old Sewage Works, I suspect that one day long ago I decided I had walked far enough and that this point provided a convenient and visible place to stop and turn around. Like all patches, various places end up being given silly names by the people who know them best. Mordor is a fairly obvious one, but then there are ones like Motorcycle Wood, which for a few months about a decade ago had a burned-out moped in it, and which since its removal results in an absurd and quite meaningless name. There is Dead Dog Ditch, again pretty obvious, and less obviously the Ditch of Despair which actually once had a Great Grey Shrike in it but for most patch workers consistently has nothing in it. There is the Reggae Reggae tree which in the summer months sometimes pumps out Wailers tunes amid a herbal fug, and finally the Wryneck Bush of which no trace remains as it burnt to the ground in 2019 yet is still fondly recalled on maps.

But enough of that, the point is that Common Sandpiper is at the time of writing not on my year list, but the fact that it is so close has had some patchworkers questioning the legitimacy of the original boundary - not me I should hasten to add, I am not so shallow, but it is a fair question and there is no earth-shattering reason why the line is where it is other than a knackered old metal fence that may once have had a gate. I actually have no idea if the gate is still there or not, for as long as I have birded here it has never been closed and may not actually be present at all. It may never have existed in the first place, who knows, the patch works in mysterious ways.

I came back onto the patch the long way, along the bottom of the City of London Cemetery and then up alongside the railway line until I reached the Forbidden Triangle. Despite the name this is a legitimate part of the patch, and it has only become known as the FT because nobody can be bothered to go there. It is at least a triangle though, and I crossed over it without much thought. I was keen to get to Alexandra Lake and see how many Gulls were there today.

I arrived at the south east corner, gave it the once over, saw nothing, and continued to the western end where the Gulls typically hang out. For some reason this year has seen an ever increasing number of large gulls here, not sure why, and counts of 60 became 80 became 100+. Yesterday was exceptional though. Wow! I have rarely seen so many, and they were basically impossible to count so I ended up estimating their numbers and taking a photo to get an accurate view later on. Almost all the birds were immature Herring Gulls, with a handful of adult LBBs and a single 2CY Yellow-legged Gull. Don't forget that this is May - we should not have this many large Gulls on the patch, this should be the off season where we can look at other things and not worry about mantle shades and tertials and so on.

As it turns out I woefully underestimated the numbers. I started at 200+, upped my guess to 300, but the actual number when I counted them on screen was 406 Herring Gulls, 10 Lesser Black-backed (which I counted at the time as I knew the photo would just be white blobs) and the single YLG. The photo above has almost all of them in it - at the same moment there were 20 HGs and a LBB loafing on the pitches behind me. Satisfied with my work I went home and once the counting was done thought no more about birds all day.

Fast forward to this morning and a photo appears on our local birdy social media. The comment said something along the lines of having been "taken yesterday on Alexandra Lake but only checked today, a Little Grebe that looks almost like a Black-necked Grebe." The photo shows a Canada Goose and bobbing beside it.....a spanking summer-plumaged Black-necked Grebe!! I think we need to explain to Mary, who found this absolute belter (and if you recall, also the patch first Iceland Gull), the key difference between the words "almost" and "is", and to back herself a little more! The only other patch BNG occurred in 1981 when Bob was just a mere slip of a lad, and is one of the all time great blockers. Unfortunately for Bob the weather last night was totally disgusting, high winds and lashings of rain. Any Grebe with any sense would surely still be bobbing about exactly where Mary had seen it, and of course exactly where I had walked past yesterday.....

I hopped on my bike and pedalled there in high spirits, knowing what likely awaited me. Looking for small birds bobbing on the water I recorded a Little Grebe, and then another Little Grebe. And then...OMG. 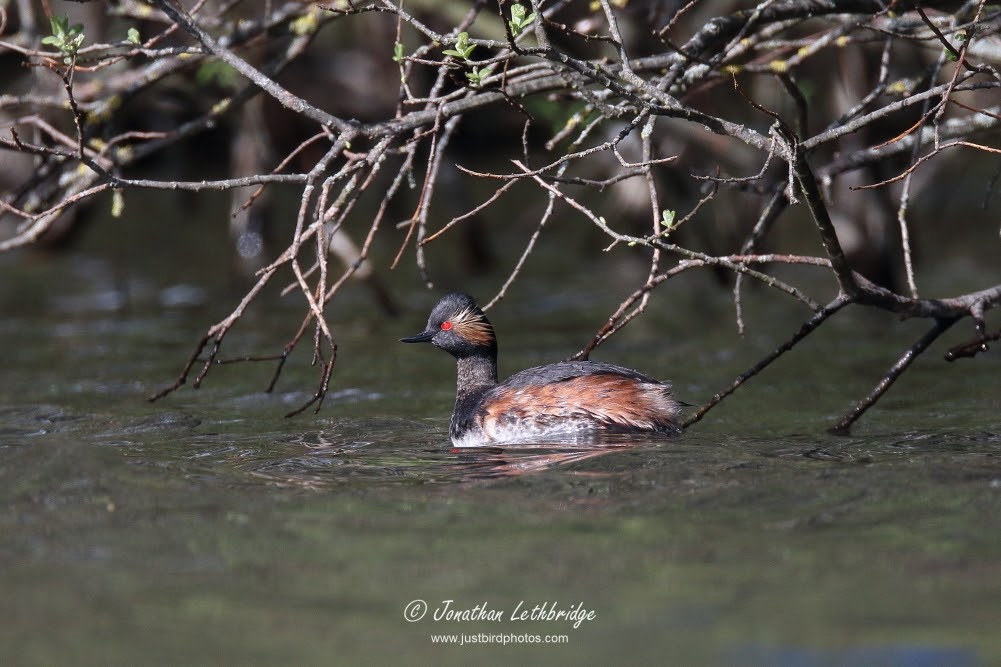 It turns out that almost all of us were at Alex at some point yesterday, and to man we all failed to notice this major local rarity. It took Mary to look properly. To be fair it did spend a lot of time either underwater or underneath overhanging branches so I can understand how it could have been missed, but were we looking properly? Or were we too casual, too sure of ourselves? Like the Iceland Gull it is only thanks to the diligence of a brand new birder and a slice of good fortune that we have now all seen it and it very nearly went begging. Imagine if the photos hadn't been looked at until next weekend, or if it had been clear, calm night? A very different outcome, and, I suspect, probably a lot more introspection!! I'm writing this to try and ensure that introspection happens regardless! As it is the Wanstead collective have thankfully snatched victory from the jaws of defeat, but it was a close run thing.

Shortly after I put out the positive news Bob arrived with a brick, but the bird was too far out and he had to accept that Red-throated Diver is now the biggest remaining prize. It is only fair, for far too long now the majority of the good birds that have turned up are ones that Bob has needed. Only last week he scooped Whimbrel and extended his lead once again for instance, and I cannot remember the last time one of his blockers fell - it might have been the Red-legged Partridge in 2015. So a great result, my 161st patch tick, and for at least one other birds a milestone bird, but you can read about that elsewhere!

Next up, the decision-making of Mute Swans.

Posted by Jonathan Lethbridge at 19:53