I started visiting Rainham Marshes regularly in 2007. If I was not wet behind the ears I was almost certainly a little damp. I'd had binoculars for many years, but they had seen little use in the UK as for some reason I believed that birding was something you could only do on holiday. The reasons for this are extremely hazy, possibly they are connected with work and family, or simply age, but for whatever reason something changed and it also so happened that around the same time I caught the listing bug and had started to write things down. I didn't count anything, merely the presence of something was enough to satisfy, and so my first record from Rainham Marshes is a list of 28 species on the 13th January 2007, including such mindbending rarities as Greylag Goose and Mute Swan. I didn't visit again until March but from April onwards my trips there became more regular. Incidentally both of these visits predate my earliest records from Wanstead - although I know for a fact that I had undertaken some preliminary excursions in the Park and on the Flats well before this (we moved here in 2004) I had clearly been insufficiently moved to commit pen to paper.

At around the same time I also discovered the, ahem, joys of twitching, and was beginning to zoom off here there and everywhere. Looking back is rather cringeworthy and not my finest hour - I had two children under the age of four and was soon to add a third. In retrospect perhaps this was a coping mechanism as when the third arrived I probably went birding even more. I feel guilty about this to this day, which is why I have taken on all responsibility for the bins and recycling and always refused to let Mrs L get involved. Errr....

Anyhow, things continued in much the same vein for a further two years, when suddenly but not entirely unexpectedly the global financial crisis came knocking on my door. With a cardboard box. I forget the exact day of the week, but one mid-morning in February I found myself relieved of my building access pass and on the street with a cardboard box under one arm and the world my oyster. Naturally I went birding.

I didn't immediately visit Rainham - nursery fees were prepaid and so for a short while I went further afield. Real life came back soon enough though, and with the kids at home and a whole host of new responsibilities that I was woefully ill-prepared for I found my horizons drastically reduced. Rainham became a day out.

The next two years were a delight. I was free of the shackles of work and could devote my time to my family and to my hobbies. Cash was a bit tight, but Mrs L had returned to work full time and we cut back wherever we could. It made little difference to our state of mind so we know we can do it again if we need to. If you are extremely bored you can go and read the archives of this blog - Day Zero is linked to above, but the following two years I think contain the best material I have ever written and likely will ever write. I went to Rainham all the time - planned days out and manic twitches with children and nappies in tow, kept abreast of the latest news by a small band of regulars who had my number on speed dial. The list of good birds is long and distinguished - for anywhere, let alone in the context of London.

By the time I reluctantly returned to work in late 2011 my Rainham list was 184, the final bird being the well-twitched Slaty-backed Gull - amazing to think that a decade has passed without another. My list advanced only slightly faster. In 2012 I added Marsh Warbler and Baillon's Crake, in 2013 Black-necked Grebe, Green-winged Teal and Pec Sand. 2014 and 2015 were blank years, but in 2016 an exhausted Razorbill was found on the pools and Shaun H found a Dusky Warbler at the stone barges.  I followed that up in 2017 with Quail, Black-winged Stilt and Crane, and in 2018 with Marsh Sandpiper and Rough-legged Buzzard. 196 and hard going.

There were some big gaps though, common birds elsewhere but for which Rainham's habitat was not at all conducive. I had to make an effort. I finally connected with a wintering Firecrest in December 2019, and last year I forwent an autumn weekend morning at Wanstead (a risky but ultimately successful strategy) to ensure that I got a Siskin. Another visit in December 2020 added Raven at the umpteenth time of asking for 199. All of which takes me to last Sunday....

At a loose end in lock-down, with a cycle ride to central London the furthest I had travelled for several months, Rich B found a Guillemot on the Thames. He was on the south side at Erith but the bird would almost certainly be visible from the north side. From Rainham. Is Rainham local in these uncertain times? Twenty minutes later as I skipped breezily along the river wall I felt that it probably was, and sure enough under the solid supports of Erith Pier bobbed a smart and rather lost black and white Auk. Hooray. Finally, finally, finally. It has been threatening for a while, and whilst this is of course meaningless in almost every way I cannot help but feel very pleased with myself. 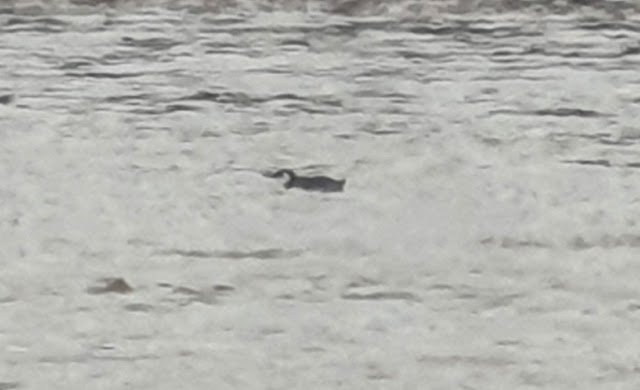