It has been a long time coming, but I have finally seen a Firecrest at Rainham Marshes. My first recorded visit to Rainham was in 2007, and in that time I have seen 196 species. Whilst most of my birding there took place when I was employed as a Domestic Godess in 2009 and 2010, I still go over there from time to time but it is fair to say that my list has essentially stalled. Here is the progress since becoming a paid employee once again.

Slow going, but having a salary has also proved useful. There is some proper quality in there though, especially in a London context. Firecrest was in many ways a startling omission. Not that there is much suitable habitat over there, but they are regular enough. What is irregular is me and my visits. If I have the time or the inclination to go birding at the weekend, Wanstead is almost always my first choice. I need to work on being in two places at the same time, it would help tremendously.

I had a leisurely start and did not manage to get over there until about 10.30, and then did a small circuit. The Firecrest has been there for a few weeks - earlier in the autumn there may have been several but I never managed to get over. It was in the Woodland as you would expect, but I had to do a couple of circuits before I bumped into it. I was in full birding mode today with a scope instead of a camera so you will have to excuse the dodgy photo. It was a somewhat hopeful point my phone at a bush and see what happened experiment. I reckon it can be reliably identified as a Firecrest though. 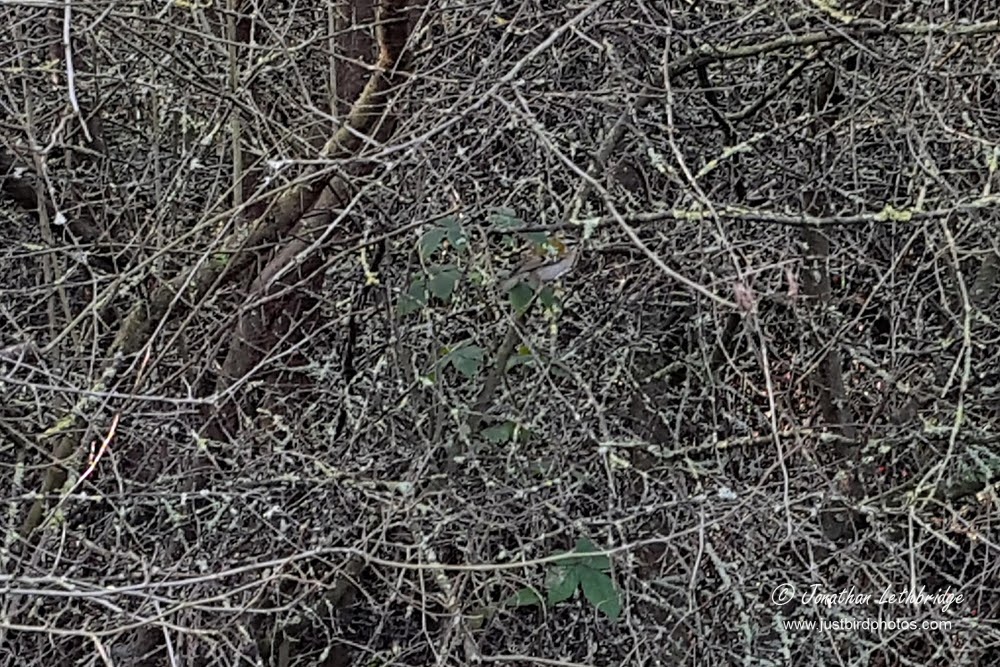 I walked a whole circuit, eBirding away on my mobile which was quite slow going. I was trying to count wildfowl as it is a WEBS weekend, and Rainham is absolutely stuffed full of Geese and Ducks at the moment. 500+ Wigeon, 300+ Greylag, 200+ Canada, 200+ Teal, and decent numbers of almost everything else - 12 species in all. Good birding, and made a nice change from seeing very little in Wanstead.

Posted by Jonathan Lethbridge at 17:26