I will freely admit it, I had given up. There was no hope, none. No hope that we would ever get a fence to protect the closest breeding Skylarks to central London. I am not a great campaigner, and I have watched the Skylark numbers gradually dwindle to next to nothing for as long as I have lived here. I have berated dog walkers and been abused by dog walkers. I have I have talked about the birds to people, I have written to the landowner, I have complained, I have blogged. Nothing. But others have more fortitude. Others have succeeded where I could not - mega kudos to Tim and the rest of the WREN Group. And so last week a work party appeared on Wanstead Flats with several hundred wooden posts and a vast reel of latticework fencing.

I had heard that it was happening of course, but nothing could have prepared me for the reality. A green wall of happiness stretching to the far horizon. I exaggerate as usual, but this is a serious bit of fencing and a large amount of the Skylark breeding area has been fully enclosed. The main path remains open, but either side of it in the prime habitat has been fenced off, paths and all. 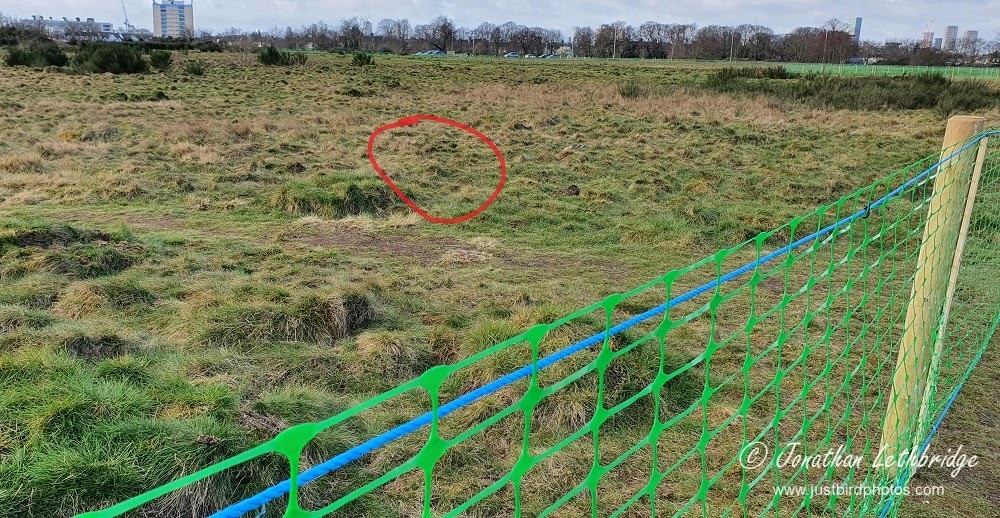 As I approached the fabled barrier yesterday I could hear the birds singing. At the fence itself the first bird I laid eyes on was a Skylark, pottering around unconcernedly about six feet away, there is no way I can adequately express my joy. We think there are three singing birds. A far cry from the numbers there once were but they are still here, against all the odds. Whether this number is sufficient to allow a recovery I have no way of knowing, the pessimist in me says not, but there is always hope. Members of the WREN Group are out there every day, voluntarily patrolling the fence, performing outreach with the local community. There are signs, there are leaflets. So far so good.

Most people simply never thought about it and they probably don't think about it now. The new fence is neither here nor there, they just walk where it guides them, nothing has really changed. Some knew of course, said they never saw the signs. Indeed some brazenly said they had seen them and didn't care. Doubtless they don't much like the fence, but equally they cannot ignore it and that is all that matters. Hopefully they will soon forget about it, their dogs will crap alongside it rather then inside it, and the birds will be left in peace.

There is the unpleasant possibly that the more militant amongst them are seriously put out. I would not put it past the sort of people who will smash a local school child's drawing of a skylark to the ground to have a pop at the fence. During my walks around it I have already found two spots in which the guide ropes appear to have been slashed with a sharp implement and no doubt the worst is still to come. Repair parties are standing by with materials. It will be a battle of wills, but the longer the barrier can be fully maintained the better chance the birds will have.

EDIT - this is now believed to be Rat damage, possibly as a result of our numerous rodent buddies looking for nest-lining material. 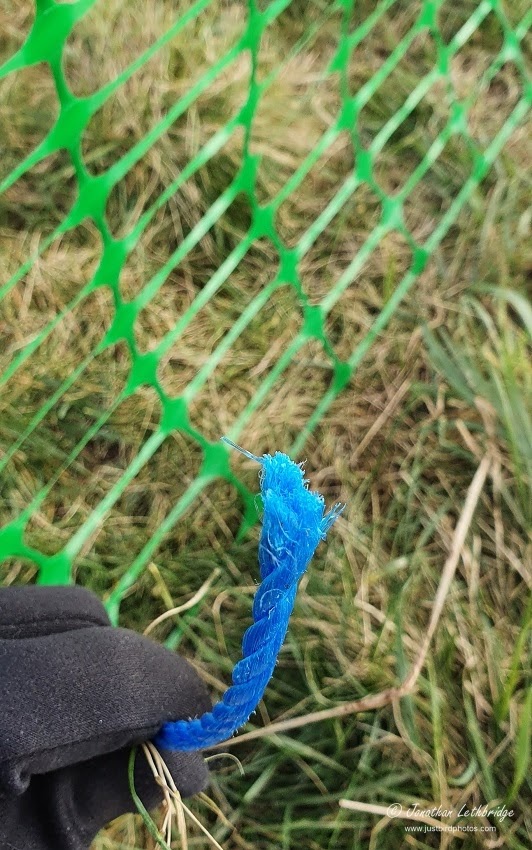 Posted by Jonathan Lethbridge at 16:35