You know how your phone tracks your every movement and sells that data to the highest bidder? Well I've found a use for it, and it confirms what I had strongly suspected. January was shit.

Here is my January as recorded faithfully by my trusty Samsung. In summary I went outside for a total of about 12 hours, which included one bike ride and a trip to the recycling centre. It makes it look more exciting that it was, as I did not in fact visit the Tower of London. Indeed the furthest I travelled from home was Walthamstow, which incidentally has now banned bird-watching for reasons unknown. 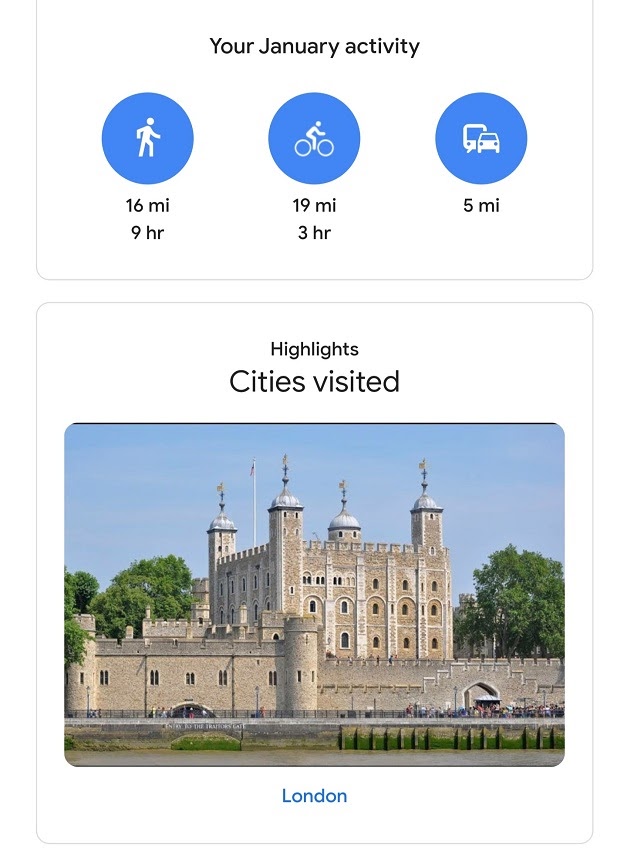 So clearly I've been very well behaved, followed guidelines etc etc, but I am a good citizen so that is not surprising. I am more interested in the outside bit. 12 measly hours. I am desperately hoping that my 16 miles does not include pacing around my bedroom/office because as it is those 12 hours translate to an average of 23 minutes a day. It is actually worse than that, as my trip to Walthamstow lasted about four hours so in fact the remaining average is more like 15 minutes. And what if I told you I had not been outside since 25th January? Exactly.

I am sure many people are in the same situation and don't quite know where to turn. My increasingly sedentary nature and corresponding decrease in sanity are caused by two things. One, the increasing strain of this continued situation, and two, work, which makes little to no allowance for it, especially at this time of year. It is relentless and extremely wearing. Then again it is not like I log off each day having watched several people die in intensive care is it? How those people somehow carry on is simply extraordinary.

But I can only talk from personal experience, and one of things I have turned to in these dark times is bird feeder webcams. The one I am currently hooked on is in Ecuador, and let me tell you that to have a screen full of Tanagers adjacent to a screen of permanent spreadsheet woe is actually working wonders. If you find yourself similarly vexed, do go and find yourself a bit of steamy tropical forest inhabited by a procession of glorious rainbow-coloured gems. I can't recommend it highly enough, and the next post will be all about them.