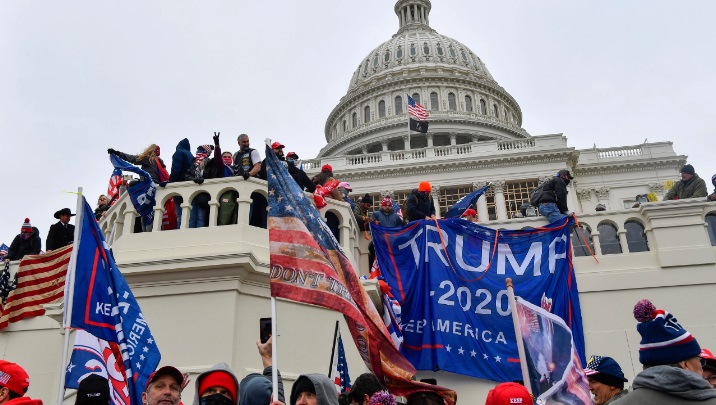 This is what Donald Trump wanted, this is what he spent weeks narrating. America's traditional adversaries around the globe must be pinching themselves with delight. Like many yesterday I had half an eye on the proceedings in the joint Congressional session, knowing that this time it wasn't quite the formality it normally is. I wasn't really paying attention to what was happening a couple of miles away near the White House - no coincidence I now realise that Trump was holding a rally for his most diehard supporters. What I didn't expect was for a sitting President to incite mob violence but I guess I am just a naive idealist. He told them to come, he spent some time whipping them up into a frenzy, and then he told them to march to the Capitol. He only told them to make their voices heard, not to violently storm it, but he knew what he was doing. A last throw of the dice. He knew.

Yesterday evening I had planned to watch an episode of The Sopranos with my son. Instead we all ended up watching CNN as the incredible scenes in Washington D.C. were broadcast around the world. What a disgrace. What an absolute disgrace and an embarrassment. After the emphatic election result did Trump genuinely think that he could alter the outcome? Is he really that delusional? Yet for weeks now, aided and abetted by poisonous sections of the media, aided and abetted by sycophantic Senators and members of Congress thinking only of their political careers in their home States, he has refused to accept the result, repeatedly lied, doubled down time after time with baseless and fraudulent accusations, and repeatedly stoked division. It's extraordinary that one man's narcissism can lead to this.

And it could have been so much worse, the lunatics who found themselves under the rotunda and in Speaker Pelosi's office clearly had no clue what to do once they got in there. It looked as if they could scarcely believe it themselves. Had this actually been planned it could have been horrible, and as it is several people died. As I type the joint session has now concluded, finishing at close to 4am. It was important that it did. What should not have been news is now headline news, and of course Joe Biden will be the next President, as nearly everyone knew two months ago.

Trump put kids in cages, he tried to ban Muslims, he praised white supremacists, he courted dictators, he sided against his own national security advisors time and again, he rolled back environmental protections - I could go on and on and on. And let us not forget that Trump was impeached! Impeached for the same type of phone call he just made to the election officials in Georgia, desperately trying to pressurise them into changing their election result. All of that may be now be forgotten in the face of this latest outrage. Even as his supporters clambered over the dais in the chamber he continued to contest the result, continued to lie. He told them to go home whilst repeating that lie. He praised them, he said he loved them; he did not condemn them and still hasn't. And even after the election was eventually officially certified he preceded his remark about an orderly transition to the next administration with the same baseless falsehoods that play to the same base instincts.

It's too late for that, and I think that message is now sinking in. The last four years have been a national embarrassment, but four years of a President seemingly suffering no consequences for a continued upscaling of unpresidential behaviour have been completely overshadowed by this one event. It is the lack of any significant challenge during these four years that has led to this. That sense of impunity meant he believed he could do this too. Everyone was thinking it, Biden said it - a sitting President inciting sedition. THIS is now Trump's legacy. The people around him now realise the game is up and that despite all prior transgressions seemingly never reaching any kind of "oh now he's gone too far" limit, this is the one that does. He is being abandoned left right and centre. It is no surprise that even with only 13 days to go the 25th Amendment is now being whispered about (the removal of a sitting President deemed to be incapable of doing their job). It is also no surprise that the majority of the Republican Senators who had been planning to object to the Electoral College slate rapidly changed their minds once the Capitol had been cleared and the certification reconvened. The Trump train, at least within the Republican Party, has fully derailed. What comes next?

Well that's harder. It would be a mistake to dismiss the people who attended the rally and who felt compelled to go the Capitol. Some of them seem to be the usual anti-Federal gun-toting supremacist nut jobs, and the photos being circulated around the world certainly reinforce that stereotype. But many are not. I watched interviews with regular American men and women who, punch drunk, truly believed that the were on the right side of history. This is what they have been told. They believe that they are the true patriots fighting the true fight. When you're fed misinformation by the elected leader of your country, the President of the United States, lies which are then taken up by other senior elected representatives, lies which are constantly reiterated by news channels and which are all over your social media, why wouldn't you believe in some huge conspiracy theory? 2016 was their moment, the election that would sweep away all of the corrupt politicians - drain the swamp! - and to see that ending has made many people very sad. Sad and above all angry. Whatever rational political judgement they may have possessed has been surpassed or suppressed that by anger, and they see Biden and Harris as a return to the same old same old that marginalised them for years and that must be avoided at all costs. Trump radically changed what constituted normal and accepted behaviour across America, and his removal from office in a fortnight won't change that. He'll continue to be the populist, he'll continue to tweet bile, to rattle cages and to promote division. He'll be easier for the mainstream to ignore of course, but his millions of devotees won't change their minds overnight.

The good news is that there could be consequences for yesterday. More good news is that there could be a variety of other legal proceedings that get going once he is no longer the President. He could be rebranded as a criminal, though I'm not certain whether that would be helpful or not. Even more good news is that Trump's anger at his election defeat looks to have cost the Republican Party both their Senate seats in Georgia, which means that Joe Biden's policy agenda becomes much easier to enact - 50:50 with Kamala Harris having a deciding vote. But that doesn't solve the deep and scary underlying problems

People say that you should never write Trump off, and up until now they have been proved right every time. I may end up being wrong I suppose, but I believe that after this final disgrace he is finished, a spent political force. I had wondered about him needing to be dragged out of the Oval Office by the US Secret Service but that moment just moved forward by two weeks. This is the watershed that ends his Presidency and any shred of legitimacy he may still have had. I am worried by what comes next though. There are plenty of people out there who have the same world view as Donald Trump and the same lack of respect for democratic institutions, and some of them will have political ambitions. I'm not talking about the rest of the Trump family, they are not the next Kennedys and they're beyond ridiculous. I'm talking about some as yet unknown populist who is not restrained by the temperament of a two year old and who will learn from Trump's mistakes that played out so visibly and absurdly in the public eye. Someone who truly has their shit together could wreak havoc at a time like this and we're on countdown. It's four years away. Biden has always said he's a transitional President. The question is what he transitions to and I for one am scared.

Posted by Jonathan Lethbridge at 11:09