The 5MR, the Five Mile Radius. Birding, ideally in a green zero-carbon manner, no further than five miles in any direction from your front door. Even before the pandemic the 5MR was being touted as a sustainable way to bird, and has quite a large following particularly in America. But I think that in these trying times the 5MR (despite seven miles being the "local lockdown" distance as defined by the Prime Minister's recent bike ride) is increasingly relevant for all of us. As I've mentioned a couple of times recently I've been looking at ways to mix things up a bit as I think lockdown or forms of it are here to stay rather than being a temporary state of affairs. I've also said that I find birding Wanstead Flats ad infinitum rather limiting, and so in the absence of being able to travel anywhere better I have been giving serious thought to a 5MR. Extending my local horizons by a few miles is likely not going to be earth-shattering, but it will be different and that may be all I need. Many people I know have taken great solace in recent months exploring their local area and getting to know it better, whereas for my part I have done precisely nothing different at all barring nocmig and a lot of sky watching from my balcony. 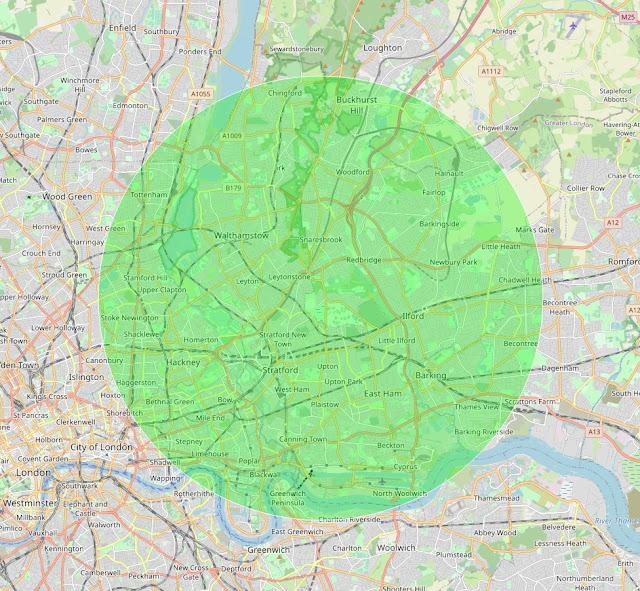 Well well, will you look at that? My 5MR has most of the Walthamstow Reservoirs in it, albeit only half of the Girling and excluding KGV altogether. It also has the Roding Valley Park, Coppermill Lane, Waterworks NR, Stoke Newington Reservoirs (these days aka Woodberry Wetlands), Hackney Marshes, Victoria Park, the Olympic Park, Fairlop Water, Thames Barrier Park, Galleon's Reach, Beckton Sewage Works and Barking Creekmouth - a veritable who's who of East London birding sites. Excitingly there is even some river, including the very bit of river that I am certain I've seen a Fulmar on, and possibly also a Guillemot.
As you might expect many of the best bits are right on the edge, which if I am to cycle to them means that they are basically out of range during the working week, but come the weekend I could find myself down by the Thames or up on the Reservoirs. I have a pannier which held my shirt and tie when I flirted with cycling to work; it can easily hold my scope and tripod with very little modification. The only thing I will need to work out is how to get to some of these places safely as London traffic continues to be quite challenging.
I am about to devote a quality half hour to constructing this 5MR in eBird, which being a US platform has exactly the functionality needed. Although it is missing Rainham I am expecting that the starting point could be really rather good. I suppose the real challenge is the 5MR green year list, but it will still be interesting to find out exactly what I've seen over the years.
Let's find out.
Posted by Jonathan Lethbridge at 18:30