A superb day out

Bradders and I set out at 5.30am for Suffolk, and saw the Heron very well in a field, in flight, and in a bush, almost immediately we arrived. It promptly disappeared again, seemed quite a wary bird. We wandered about a bit looking for migrants but it was extremely quiet bar a couple of Wheatears and Sedgie, so like the troopers we are we gave up and went to Minsmere before the rest of the world did.

This proved a smart option, as there were very few cars there when we arrived, and it was stuffed when we left around lunchtime. After a nutritious Double Decker breakfast, we did a clockwise circuit, spending quite a lot of time attempting Godwit photography from the hide near the beach. I gained a couple more year ticks from here with Common Tern and blantantly supressed Barnacle Goose, and we helped a man just starting on this mad journey identify as many waders as we could find, before going on our way, enjoying the sunshine. Reed Warbler on the Reserve was another year tick and by this point in the day I had gained six to put me on the brink at 199. Round about this point we realised that we were having quite a productive day, and whilst Bradders sourced some lunch, I wrote down the day list, which came to 81. Party-animals that we are, we decided that we should attempt 100, which I have never done before, and so started planning what we might see where. This involved David working out likely birds and sites, and me fretting that we were never going to make it. 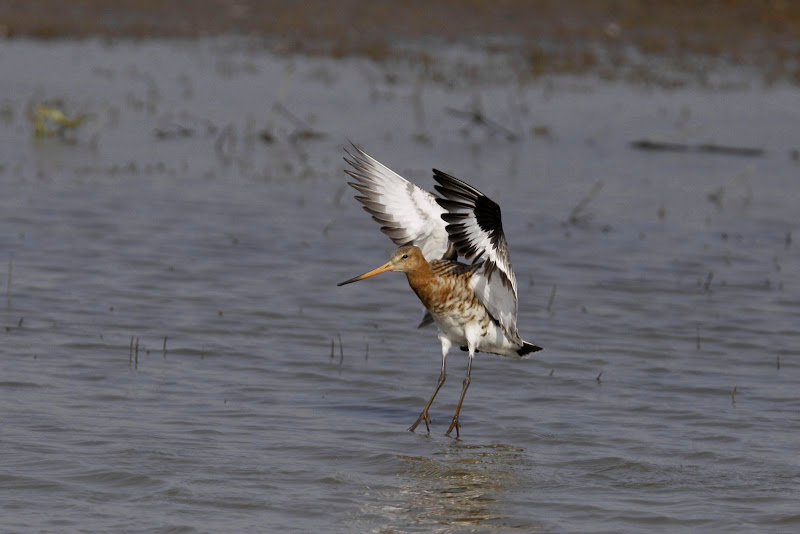 DB's planning involved going back via Essex, which seemed a like great idea, until I realised that there was a Spoonbill cunningly built into on his agenda, which he needed for '09 and I didn't! "Lets just go straight home and not go birding anymore" I said, but we went for it anyway AND I found it AND generously got him onto it. Having said that, he would have found it in another 30 seconds, and also he had inadvertently got me onto Whimbrel on the way to the Spoonbill, which he already had and I didn't, so I was already on 200 and feeling magnanimous.

A couple of waders later and we had cleared the ton. So 100 in a day and 200 for the year. Boy am I cool. I am not sure what bird was #100, it was all just too exciting. Actually I had cocked it up by missing Cormorant off the original list made at lunchtime. It might have been the Spoonbill, but I think we celebrated a Grey Plover. We found an elusive Whitethroat near Abberton Res late in the day which was David's landmark 200 for 2009, so a good day for both of us.

I got back several hours after my original estimate, but amazingly didn't get into too much trouble - I think Mrs L was expecting it. And needless to say, she shared my excitement at getting to 200 and seeing 105 species in a day. She said something that sounded a bit like "hmmmm, whatever" but I knew she really meant "Wow, thats amazing, well done!"

Posted by Jonathan Lethbridge at 23:09