After a great day out yesterday, today was a family day with no birding, and we were off to Oxford to see some good friends. So naturally a mega turned up in a different part of the country...

I tried not to panic, but I think it showed. To my credit I didn't try and change our plans, I just wept as we drove round the M25. Clutching the steering wheel, I was also heard to mutter "Come on Farmoor, you gotta deliver", and astonishingly it did! Mrs L couldn't believe it! We were enjoying a restful pint in a country pub, recovering from a traumatic child-shepherding experience in which my eldest, wearing sandles, toppled his bike into a ditch full of nettles, when the pager went off with a Bonaparte's at Farmoor. I leapt up (with permission), and whilst Burgs generously finished my pint, got there within about 15 minutes, and was straight on to an almost fully moulted adult bird. How the finder found it I will never know, as it was with about 10 zillion Black-headed Gulls. I guess you have to go through every single one. Rather him that me I thought, and headed back to the car. 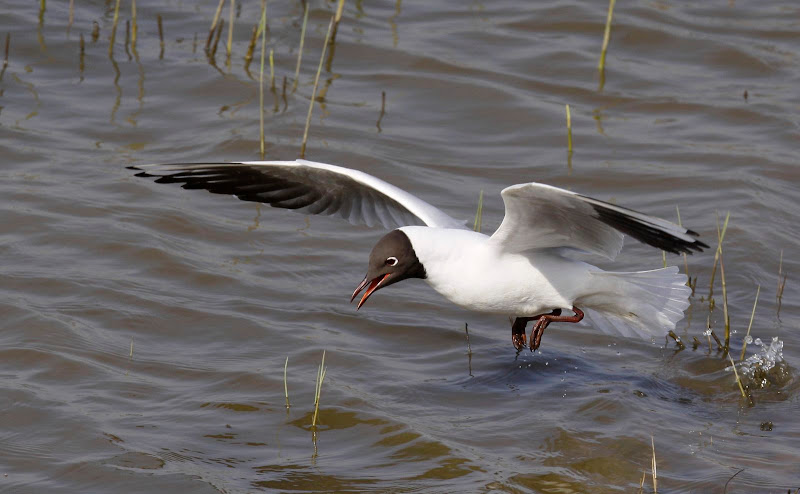 A very patient man looked at a lot of these

Back in Oxford, more trauma. Burger and I have six kids between us, he is my oldest friend. At school, we were probably the two least likely boys in the class to ever procreate, yet somehow we have ended up with six under five, leaving those you might have put money on in the dust. The reduced adult to child ratio due to a convenient Bonaparte's Gull had resulted in my middle one toppling her bike into the same ditch of nettles. Mrs L and Mrs Burger had simultaeneously raced to assist, and whilst they ran ahead, the pushchair Mrs B had been pushing rolled off the path and into...the ditch full of nettles. It's fair to say that the path has an extreme camber. Anyway, youngest Burger toppled into the nettles as well, face first. So a quick trip to the pub has resulted in fifty percent of offspring injured, superb parenting. Everyone was pleased to see me when I got back.

Posted by Jonathan Lethbridge at 10:28