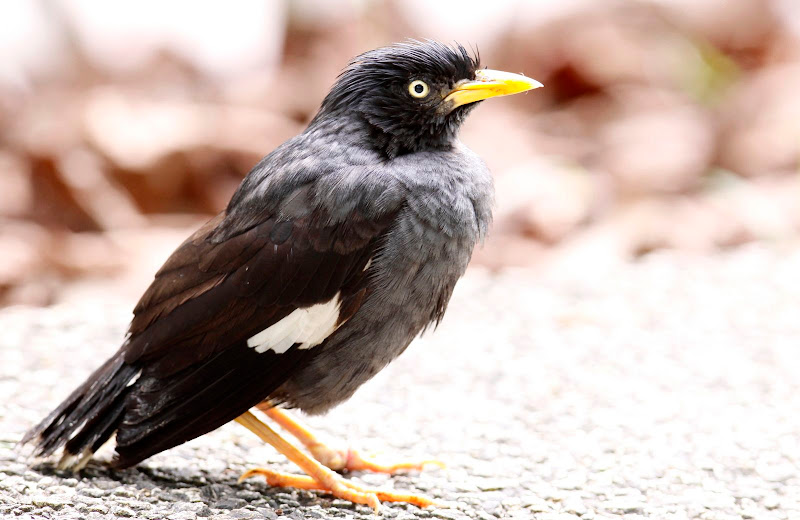 I hate flying, so what better than to spend 12 hours on a brand new untried and untested plane, flown by people who can therefore have scant experience of flying it. Actually the new A380 superjumbo was very nice - if you like planes (which I don't) - and it did its job very well, which in this particular instance was getting me to Singapore in one piece. Bob and I landed at 7.30am Singapore time, which was approx 11pm London time. We had an entire day (or night...) in Singapore before the next leg to Brisbane, and thought a spot of sight-seeing might be in order. Neither of us are shopping people, so we decided to miss out the highlights of downtown Singapore, and instead headed for the largely uninhabited island of Pulau Ubin, which sits just north of the main island. Reached by charmingly-named Bumboat from Changi Village, it is a relic of what Singapore used to be like, unpaved roads, and the occasional Kampong. It is also, purely coincidentally, one of the best places in Singapore for birds, so good thing that Bob liked my suggestion that we go there, hire bikes, and explore the island. 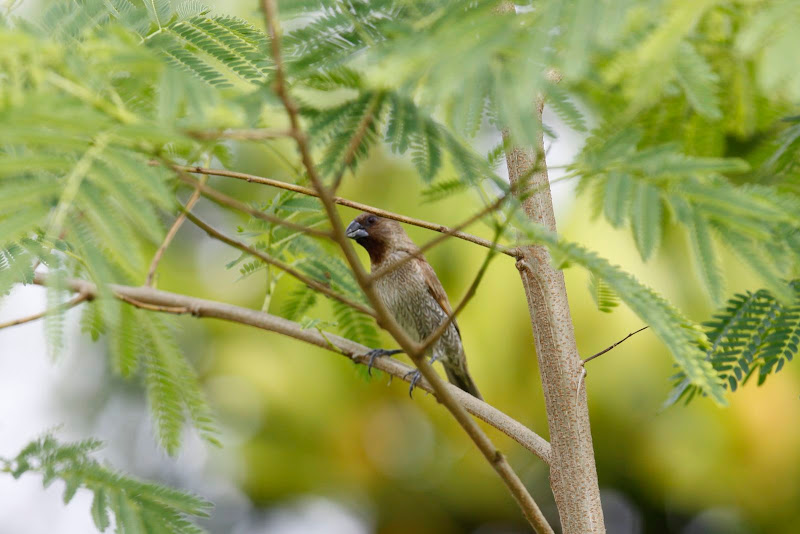 Scaly-breasted Munia
When we got there, geniuses both, we realised we were woefully unprepared. We had perhaps half a litre of water, no sunscreen, it was about 32 degrees, and it was 1.30 in the morning. At least the £3-per-day bikes were really really high quality, which would make cycling round the rough paths serenely easy oh yes. Bob, veteran marathon-runner and iron-man trainee, fared rather better than I did, as the following post-cycling photos demonstrate. 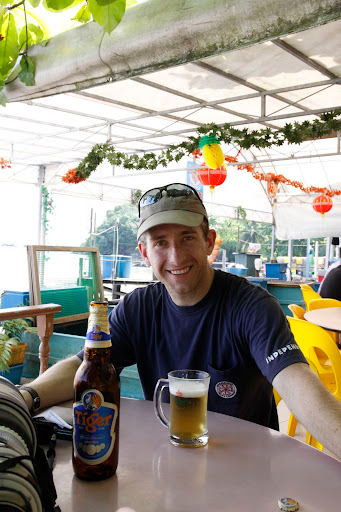 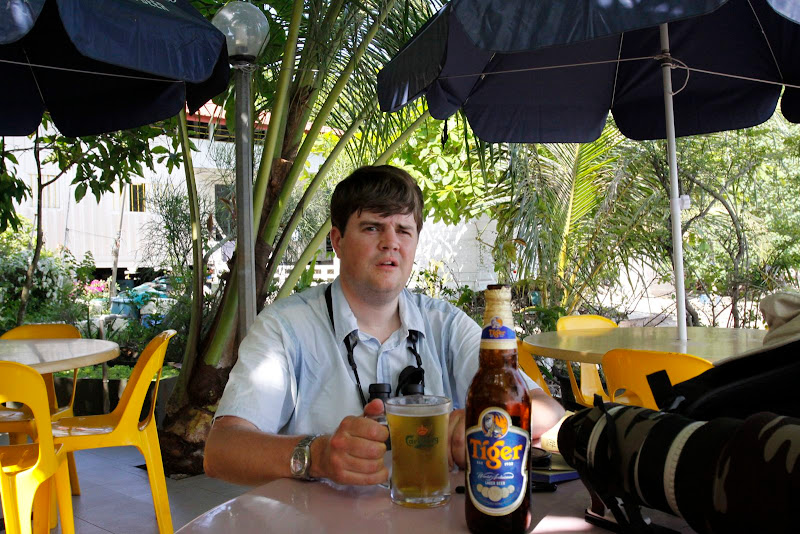 Anyway birds, yes, there were some. Not as many as I expected, but I was in such a state I probably missed loads. Also, and despite the massive gulf in comparative fitness, Bob was carrying just a map, roughly 1 sheet of A3, whereas I had bins, field guide, camera and stupid lense, more lenses, batteries, chargers, the water, and about 30lbs of excess fat. Not a great deal I can do about the flab in the next two weeks, but I may revise what I was planning on taking to Delhi...

In addition to all the birds I haven't mentioned at all yet, there were also highly impressive, huge, scary, expletive-provoking spiders, stacks of lizards of varying sizes, the biggest well over a meter, and some Long-tailed Macaques at the eastern end of the island, a wetland area called Chek Jawa. 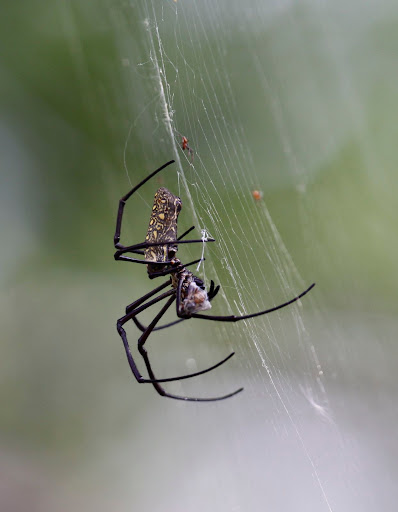 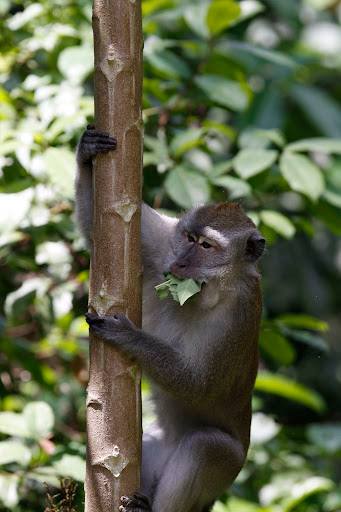 Birds, yes. The daylist is below, but the highlight was as we were drinking beers after having finished our gruelling tour. Never has beer tasted so good by the way - utterly wiped-out after 30 hours on the go, jet-lagged, physically exhausted, sun-burned, saddle-sore and dehydrated - Tiger Beer hit the spot.

Bob: "Jono, there's your bird! That bird thing you were looking for! The, err, whatever the fuck it was called, the one with the big beak!" 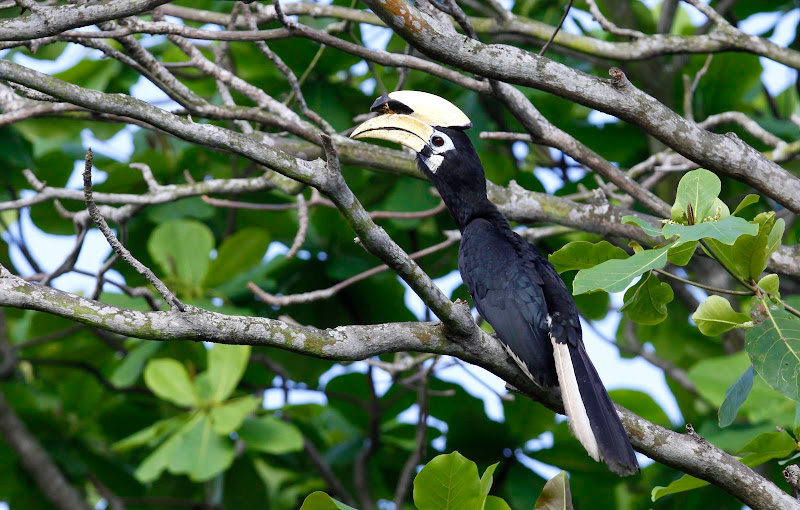 For a man on the verge of death, I moved very quickly 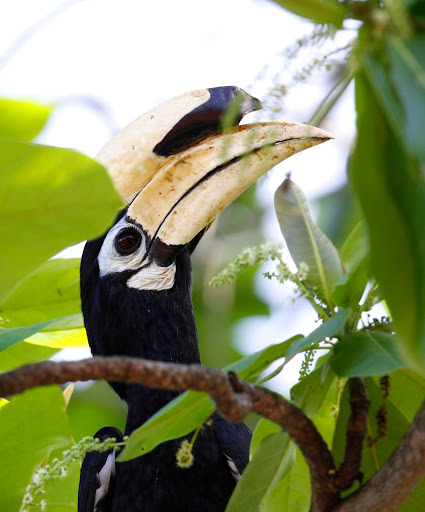 Avian Berocca
Absolutely stunning, and with an amazing call. Bob spotted this one at Pulau Ubin village, and it spent some time in a tree right next to the jetty. I never for one minute thought we would see one, this would be the bird of the trip no matter what else I saw. There was another bird at Changi Village near the hawking centre, so perhaps they are more common than you might think.

Anyway, our slow cycle round the various pathes netted 39 different species, with a handful of unidentifieds, the most annoying of which was bright red and black, and looked very cool as it disappeared into a bush never to be seen again. The most productive area was Ketam Mountain Bike Park, west of the jetty. It was here we got the White-bellied Sea Eagle, Brown Shrike, the Coucal, the Oriole and the Munia.

So we saw some good stuff, and it was very calm and quiet if that is what you were after. The island has fewer than 100 residents, and not many visitors in the week, though by the looks of the number of hire-bikes available, weekends could be a very different story. Definitely recommended if you have about 6 hours spare in Singapore, and don't mind a bit of pain in the name of birding. Alternatively, what you could do is skip the mountain bike part, which is what did it for me, and just start on the Tiger Beers as soon as you arrive. You would see fewer species (the Cafe count was 14, including such gems as the Hornbill and W-B Sea Eagle), but it would feel much more like a holiday. 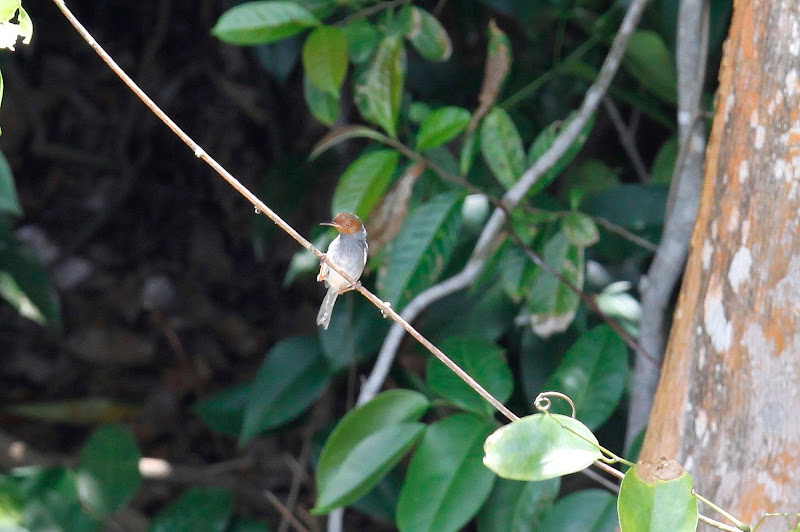 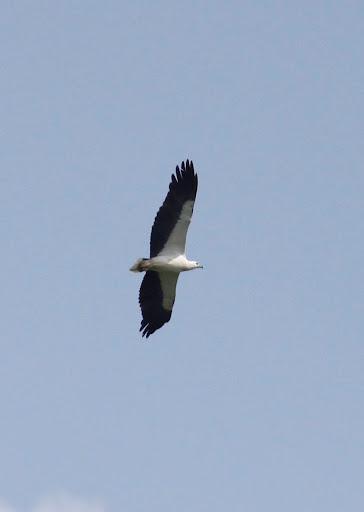 White-bellied Sea Eagle, Ketam
* It actually looks like a Common Sand in the photo, but that wouldn't be a tick, so I am going to turn it into something better.
Posted by Jonathan Lethbridge at 11:50