I was expecting it rain, and therefore to be able to have a nice lie in. Unfortunately it was nice and clear and I was forced to get up. I delayed for as long as possible by having a small coffee and looking out of the window, but I had soon exhausted the slip pickings in the garden and was forced to go looking for more. Best bird out of the eleven species, Sparrowhawk. I didn't count the Golden Mallard, Anas fantabulosa, which hopped onto the balcony to stretch its wings - a spring migration to Ireland awaits and it needs to get into shape for the journey. 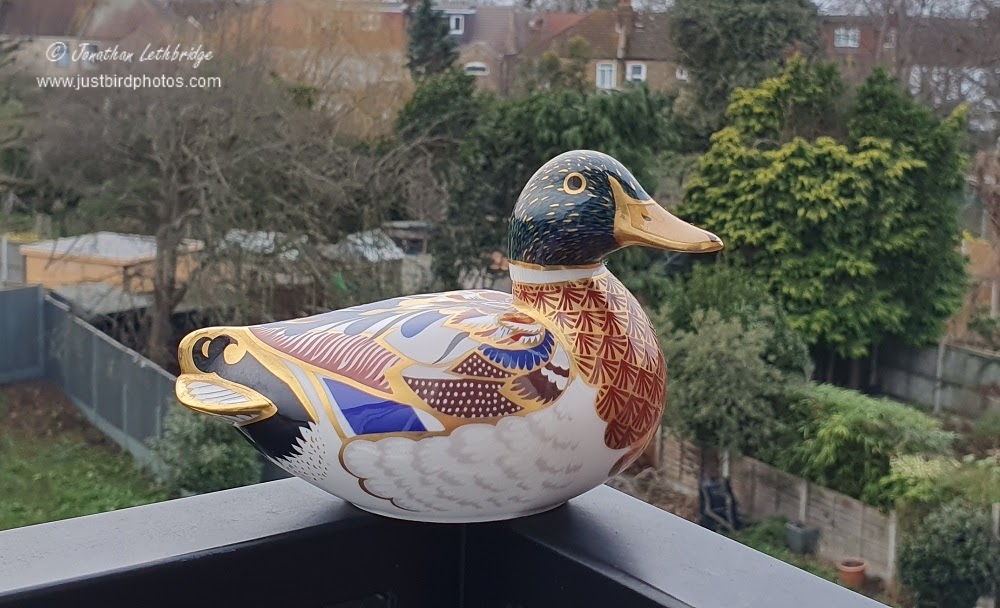 I tootled off towards Jubilee, not quite a spring in my step, but happy to in the fresh air. The days leading up to this point have all been spent indoors as the weather has been filthy. I just don't enjoy birding in high wind and rain, and Wanstead Flats does not have the same potential as Shetland to justify getting out in it. But today was nice, a bit breezy perhaps, but not too bad at all. Messages regarding bird sightings were coming in thick and fast, everything is exciting again after all. The best message regarded the continuing 2023 presence of a Dartford Warbler located in the brooms by James. The Stonechats that it came in with fled at the first sign of snow and ice, but these hardy little birds somehow stuck it out and are still with us. Note how I say bird plural. For a while now we have thought that there might be two, but nobody has really be able to prove it beyond doubt. Well this morning Tim, Sean, Bob and I did - with both birds in the same view at one point. Both active, and very vocal, and seemingly chasing each other around.
I ended my morning on 40 species, easing myself back into it slowly. The patch total was a pretty decent 62 I think, from multiple contributers. I'll go to the Park tomorrow rather than the Flats, it will have different ducks, Siskin, Nuthatch and the possibility of Grey Wagtail and Water Rail.
By the way, the fireworks last night were spectacular. I generally hate fireworks, mainly because it takes almost nothing for people to set them off round here, but for the stroke of midnight on New Year's Eve I will make an exception. We watched from the balcony at Chateau L, and were treated to 180 degrees of sound and light, quite extraordinary. Many I suspect were simply from Londoners' gardens, but there must have been some official displays as well as some of these things were huge. The glut was obviously around midnight, but they continued for some time afterwards as there was no off switch....Anyway, so here we are in 2023. Happy New Year!
Posted by Jonathan Lethbridge at 20:03