Staines Reservoir is the coldest place on earth

I've not been to Staines Reservoirs since 2017, twitching a Shore Lark for my London list. I used to be quite keen on my London list, but as with many things the ardour is cooling. Or has cooled perhaps. Going to Staines certainly has that effect, the causeway is one of the coldest places on earth. Any time you are there in the winter months it is not long before you start to question why exactly it is that you are there, and whether there might be somewhere else you could go. Somewhere warmer....

Back in the day I used to go to Staines reasonably frequently. Frequently for someone who lives an hour away that is. The beauty of my immaculate record keeping shows that between October 2007 and October 2010 I visited 11 times. This was in my heydey when almost everything was new, and in 2010 I think I was I pursuing a London year list, and as Staines kept on producing juicy rarities I had to keep shlepping over there. Chasing a year list is the ideal medicine for getting year-listing out of your system - never again - and since then I'd been over there just twice.

This morning I went again, the prize a Lesser Scaup, the first in London (that I am aware of) for many years. It required an early start, but London Transport did not let me down, and two short bus rides saw me arrive in front of Tony's house right on time. It was all his idea - I'd been vaguely aware of this bird from a report earlier in the week, but had been so busty I'd forgotten about it. Had I been required to get myself there I doubt I would have bothered, but twitching is always better with other people, and so when he sent a casual enquiry last night I took him up on the offer immediately. 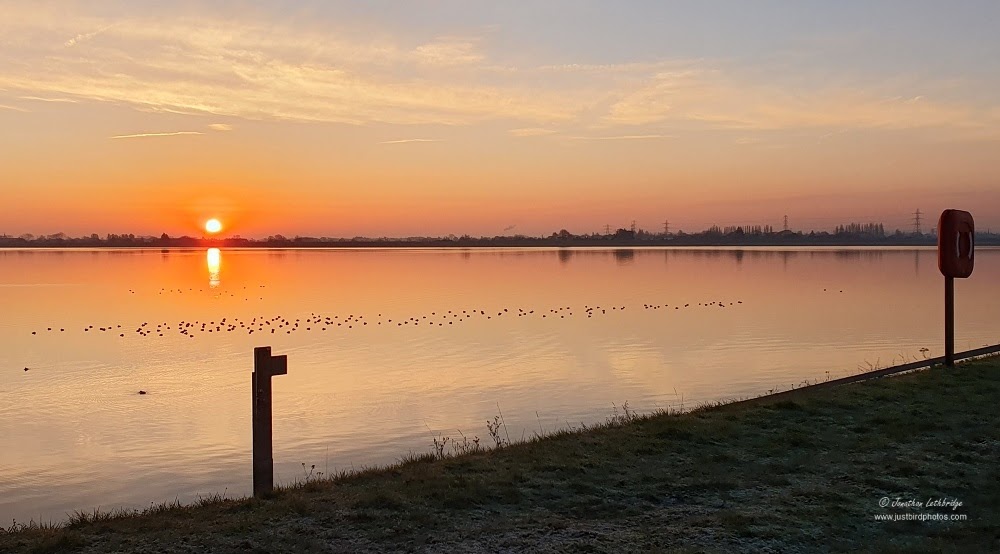 We were onsite by 8am, the sun just rising. It was quite beautiful in its own way. Glacial, but beautiful. The flock of Pochard were close to the NW tower on the south side and so the views were actually pretty decent. The bird even woke up for about ten seconds whilst we  were there, not a great ratio but it was enough to get a bit more of a feel for it. By golly it was cold though. Walking through Wanstead at 6am had been fine, but the causeway at Staines is a whole new level, it is scarcely believable that it is even in the same country such is the temperature differential. It starts in the extremities, the tips of your fingers go numb through your gloves. It creeps up your legs from your feet, you feel yourself cooling down, losing sensation. Pretty soon it is unbearable. You stamp your feet, rub your hands together, but it is a losing battle. God knows how the locals manage to bird the place year round. And this was on a day with no wind, the water was completely still. I vividly remember taking my son with me when twitching a Red-throated Diver when he was about ten years old, one of the worst parenting decisions I ever made. He is still with us, but it must have been a close run thing. We stuck it out for an hour or before running for the heated seats of the car.

Posted by Jonathan Lethbridge at 18:44