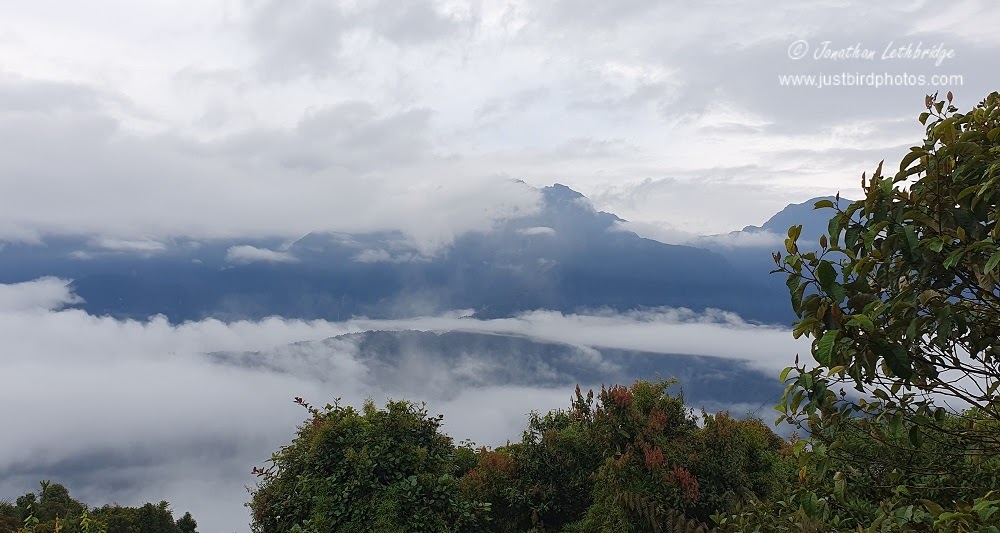 Guess what? We woke up in the dark and drove for an hour and a half to be somewhere by dawn. This was becoming shattering! Accompanying us this time was Gleison, a local guide in some way connected to the Lodge - in other words he knew the area like the back of his hand! This time we left the lodge at about 4am, and in the same jeeps as yesterday drove the whole way up the track to the Communication Tower at the very end. This is also the site of a small military outpost and so we were watched by soldiers as we ate a quick breakfast and had some much-needed coffee. The birds came thick and fast, the main target of Chestnut-bellied Flowerpiercer seen really well. Rufous Spinetail was here too, as well as Velvet-purple Coronet and Violet-tailed Sylph, both new Hummingbirds. The view from this spot was magnificent, with Cerro Tatama at one stage being almost completely visible, an immense mountain with many waterfalls running down it. A Crab Fox observed proceedings, and was rewarded (as I suspect it is always rewarded) with some fruit.

As the track here was extremely precarious we drove back down the steepest section before we started birding, and quickly started adding to our sightings. It is a little difficult to know what came when, especially as most of it went unphotographed, but highlights included a Narino Tapaculo which we actually saw, a Yellow-breasted Antpitta which we heard and then Gleison persuaded to run/fly across the track, and White-faced Nunbird. Throughout our descent we were kept watered and fed by John and Duber who followed us in the vehicles.

We pinned down Muchique Wren fairly early on, which replaces Grey-breasted Wood-Wren in this area, and at an open area we had sensational views of Gold-ringed Tanager and Chestnut-breasted Chlorophonia, a knock-out bird if ever there was one. A pair of Tanager Finches were also seen rather well, and both Green-and-Black and Orange-breasted Fruiteaters. An unusual sighting was a juvenile Semi-collared Hawk perched out in the open, unconcerned by our presence.

We broke for lunch at one of several shelters constructed along the track. These are apparently new, put up during the hiatus caused by Covid. The lunch stop was the largest, a two storey affair with mid-canopy views. Lunch was hot, and delivered from the Lodge on a moped - a brilliant idea! The rain that had been threatening all morning really kicked in at this point, and so we all at on the platform looking at Hummingbirds and drinking coffee and chocolate until it eased sufficiently that we could continue. The gap did not last long, we got about another hour during which we saw lots of new Flycatchers (Ornate, Flavescent, Golden-bellied) and our first Collared Trogon. We also had some terrific view of Ochre-breasted Antpitta near a small shelter, but as with majority of the birds seen today the photography opportunity simply wasn't there. Our 12th and final Antpitta species of the trip! As the rain hammered down we decided to return to the accomodation, reaching the Lodge by about 4, where we had more coffee and were perfectly content to sit around and watch the multiple Hummingbird (11 species - list here!) and Tanager feeders. Black-headed Brushfinch was seen at the forest edge, and a Black-chested Jay was clearly a regular, feeding from the tables. Before dusk we tried for Crakes and Rails at the pools behind the main building, but could only get Torrent Tyrannulet and a large number of Flame-rumped Tanagers and Rusty-margined Flycatchers.