We took the jeeps again direct from the lodge. In the dark? In truth I cannot remember, but probably, as we went about half way up and my first eBird list starts before 7am. It wouldn't be a proper holiday unless I came back exhausted though would it? We stopped about half way up, at around 6.30am, for a Moustached Puffbird, Sooty-headed Wren and a Tricoloured Brushfinch - heard by Gleison's keen ears as we drove along (he tended to always have his head stuck out of the window - this is how I like my guides!).

The main birding started a short while later after breakfast on the fly. Same tactic as the previous day, birding whilst descending with the cars following us in short hops. This allowed us to escape the worst of any rain, and also meant we didn't have to carry water or food, or in my case my camera - by this stage I was getting rather fed up with it, a heavy lump that didn't seem to be doing me much good.

The birds were amazing once again, the best of the morning being amazing views of a Blue-fronted Parrotlet. When quizzed later that evening on what the best birds had been, both Gleison and Alejandro picked this bird without hesitation, I think they had only seen it a handful of times, and one of them lived here! Best of the rest included a Scaled Fruiteater, another bird high on our list of targets, three Orange-breated Fruiteaters, a glut of Flycatchers - Cinammon, Ornate, Handsome, Flavescent and Acadian. An Olivaceous Piha was tracked down, and we had unexpected views of an Olive Finch on the path in front of us.

A small crowd of agitated birds were gathered around a dense tree hanging over the slope - a Cloud Forest Pygmy-Owl, but try as we might we could only hear it despite knowing almost exactly where it was. That's birding! A heavy shower at about 10am postponed birding for about an hour, but we were reasonably close to one of the shelters so avoided the worst of it. This is an occupational hazard of birding in the Andes, but on our final full day to have any birding time go begging felt distastrous.

Luckily it cleared again after an hour or so and we were able to resume for a while before another moped lunch. We were a little further down now, and the difference a few hundred metres of altitude makes is remarkable. The birds are not wholly different of course, but there are some that are simply found at this level and no higher. Toucan Barbet was one of these, with three birds seen well in a tree, and also on this stretch of mountainside was a different Tapaculo. Part of what made it different is that I got a photo of it, something I had previously thought impossible, but somehow Tatama Tapaculo made it onto the back of my camera. Not all of it obviously, and the photo is terrible, but it represented a major step up in my interaction with this family.

Once again the list of birds seen is too numerous to list out, and with most of them not photographed it would also be pretty boring. When I finally finish these blog posts I'll do a day by day bird list which will allow people to see what was seen where. These take ages to prepare, so make sure you read and appreciate it! A bird I will note here is Lanceolated Monklet, a big prize and one that Dave and Richard were super keen on seeing. Gleison was once again the superstar, hearing the bird deep in the forest and somehow attracting it out so that we could all see it. The views were actually sensational, and as well as the bird here is photo of Richard doing his Monklet face. He also has a Monklet finger but I couldn't possibly publish that. 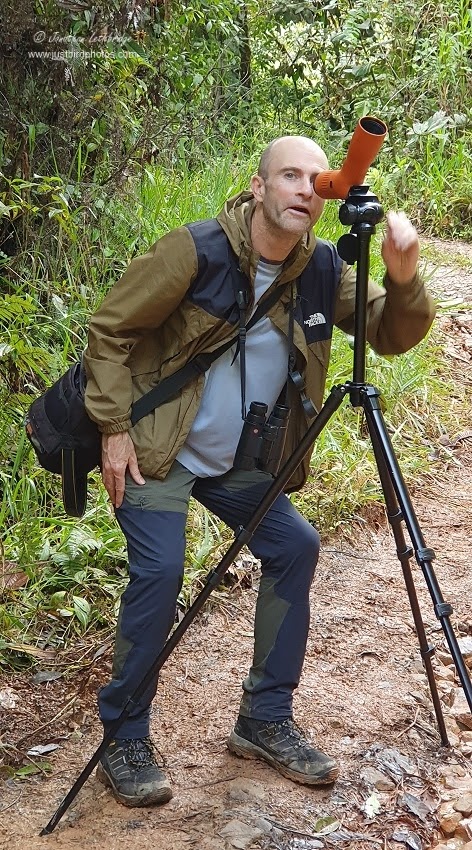 We reached the lodge just before 5pm, a long and fulfilling day, and sat around drinking coffee whilst a mere 15 species of Hummingbird buzzed around the feeders. Fifteen! This is worthy of a pre-list!

As you will have gathered by now, Montezuma is an incredible place, easily the best location of the trip; we had definitely saved the best until last. We had a final morning the next day in which to try and get a few more species on the list, but with a three hour journey to Pereira and an early evening flight to connect with our international flights we could not hang around!