The Midwest - Day 6 - South Dakota - Pierre and the Grasslands

The wind had dropped significantly overnight thankfully, meaning birding normally was once again possible. I started birding at the catchily-named Oahe Downstream Recreational Area. This is the stretch of river just below the enormous Oahe Dam, and in summer looks like it would be a popular place for camping, fishing, swimming etc. In December however it was distinctly unpopular - just me! It was good birding, quite a few Bald Eagles, a good variety of wildfowl (including a dinky and presumably vagrant Ross's Goose in with c150 Canadas), and plenty of Woodpeckers and Nuthatches in the tall trees. I spent an hour here before moving on to the nearby Archery Range, kind of an assault course for people with bows and arrows - in summer I would not suggest birding here! This was excellent, with huge numbers of American Robins, a Townsend's Solitaire, and a flock of c80 Cedar Waxwing. At one stage a Cooper's Hawk made a pass through sending everything up and causing me to basically double my counts of pretty much everything! A small number of Purple Finches were here too, and a flock of distant Canadas flying east along the river were preceded by three Snow Geese. The odd Redpoll chupped overhead.

At about midday I returned back to Farm Island which per eBird had seemed the most productive area. As I pulled up I met a birder returning to his car and, as you do, started asking for gen. I was most interested in Northern Saw-Whet Owls, as these seemed to be recorded both here and back near the dam, and it turns out these were Kenny's special subject. He was on a bit of tight schedule, but very generously allowed me to follow him back to the dam area to check out for a roosting bird he had found a couple of days earlier. Amazingly it was in the second tree we checked, they seem quite site faithful - Kenny finds them by checking for whitewash underneath small pines of which there are thousands, and still gets a thrill each and every time. I could see what he meant! I would never have found one by myself, and it turns out I had actually been looking at trees that were far too large, the Owls seem to prefer smaller saplings. Their tactic for remaining 'hidden' is to sit perfectly still, to the point that you can walk within mere feet of them and they won't move despite the fact that this curious two-legged thing is looking right at them!

My next stop was the Pierre Grasslands south of the city. I had planned to bird them the day before but had skipped the area due to the wind. Kenny had not been there for ages so was unable to give me any recent gen, but I just picked a few good-looking gravel roads that criss-cross the area and gave it my best shot. As it happened this was pretty good. Almost the first bird I saw was a Prairie Falcon on a post, and at a spot I'd marked down called Richland Dam I found a huge flock of Lapland Bunting, and best of all 18 Greater Prairie Chickens, the main reason I was checking this area. I had a second spot in Wisconsin in my plan, so getting them here gave me some future flexibility.

By now it was either 1pm or 2pm, or maybe 3pm, I wasn't sure, I think there is a time change near Pierre somewhere - when I tried to add an eBird list I had forgotten about it would not let me saying that the time was in the future. Anyway, the sun was going to set in the same number of hours so I had to get going. I had a 430 mile drive ahead of me that would take 7 hours, destination Grand Forks, North Dakota. It was much colder than prior days and the roads were noticeably icier, probably due to the weather out of the north-west, and I did not fancy doing all of the smaller roads in the dark. I made it of course, but it was really hard and I wished I had left a lot earlier. On the plus side I hit a place called Cottonwood Lake near Redfield at around dusk, and was treated to the spectacle of thousands upon thousands of Snow Geese flying south-west. The sky was filled for at least 20 minutes, I estimated 25,000 birds but who knows the true number. I could hear Ross's Geese in with them but had no way of counting them. It was simply sensational. 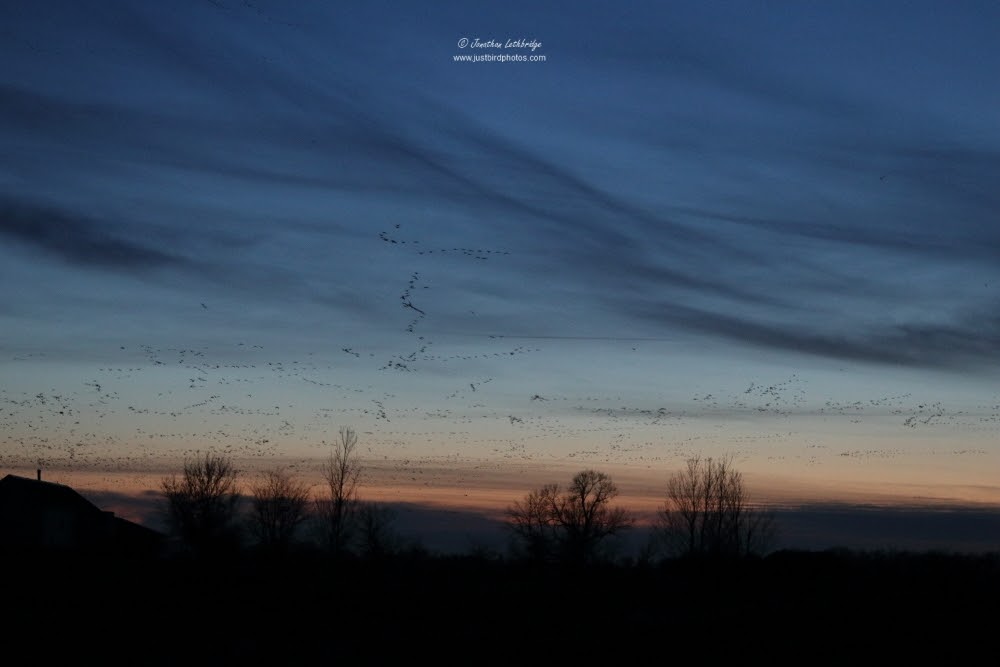 From there it was about another hour to Interstate 29 (which runs all the way from Kansas City, Missouri, to the Canadian border and then onwards to Winnipeg), a further two hours to Fargo, and then a final stretch of an hour and half to Grand Forks. To say this was very tiring is rather an understatement. In Grand Forks it was -15C and there seemed to be a fair bit of snow, and I was very cautious indeed despite the amazing traction of the Chevy.

Posted by Jonathan Lethbridge at 12:30