The Midwest - Day 5 - South Dakota - Mount Rushmore and the Badlands

A big day today, and one that would start with a bucket-list moment at Mount Rushmore. As regular followers of these pages will have come to realise (if you have not, what is wrong with you?) one my life goals is to photograph a small panther in front of as many recognisable vistas, cityscapes, monuments and various other backdrops as possible. Mount Rushmore ticked all these boxes. Many people when they travel take along a small inanimate companion; I am definitely not alone in this, and even I were I doubt I would feel embarrassed about it whatsoever. It is just what I - we - do. I have had Snuffi for over 20 years and he has been to a huge number of places. Anywhere I go, he goes. And he wants to go to more so Covid is a real pain.

It was about an hour or so north of Hot Springs where I had spent the night in an effort to spread out the driving a little bit, and this being such an exciting moment I set off quite early. I was the second person there and was thus able to piss about taking photos without any distraction, other than a vicious wind which threatened to blow Snuffi to Iowa. Stupid photographs aside, I have to say that is an impressive place, but I am still confused as to how this idea came about in the first place - it is in such a remote location, why would you spend years doing this? Unfortunately the whole place was shut, automatic machines and barriers took my money but I was unable to visit any of the interpretative bits or buy any tat - I had so been hoping for a fridge magnet. When it began to snow I decided I'd had enough, and pointed the car east in an ever-strengthening wind. The forecast had said to expect a breezy day, with gusts of 50mph lasting from first light to the following morning the whole way across the plains. And coming from the north-west it was glacial. 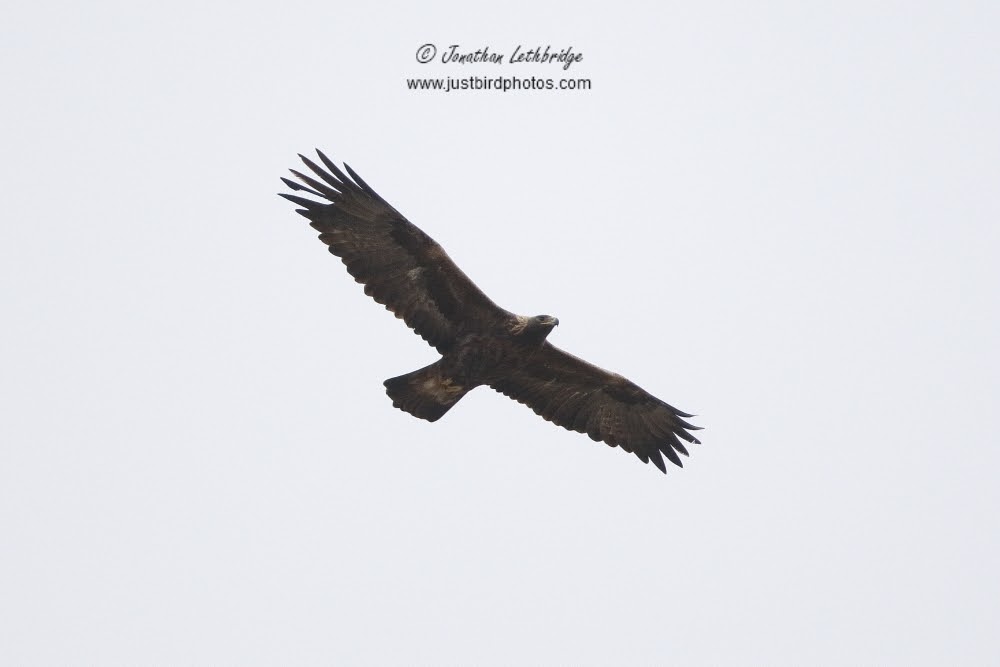 I stocked up on water and snacks at a Walmart in Rapid City, all the while adding to my new South Dakota list. Hundreds of Starlings, a Red-tailed Hawk and an American Kestrel all seen from the car park. My next destination was Badlands Natioal Park, which I entered from the bottom near a small settlement called Scenic. The wind by this stage was in full-on battering mode and I had to be very careful opening the car doors lest they get irretrievably bent. I wound my way through the park on gravel roads, stopping frequently for birds or vistas. Golden Eagle and Bald Eagle were seen within minutes of each other, and a small party of Shore Larks were near a Prairie Dog 'village'. Lots of big mammals too - Buffalo! It was the landscape that was so impressive though, crazy rock formations and wind-sculpted bluffs in all manner of colours. Today had not been much of a birding day anyway, and I suspected that my plans in the Pierre Grasslands would not amount to much given the wind, so I spent quite a long time here even the light was dire before moving on. 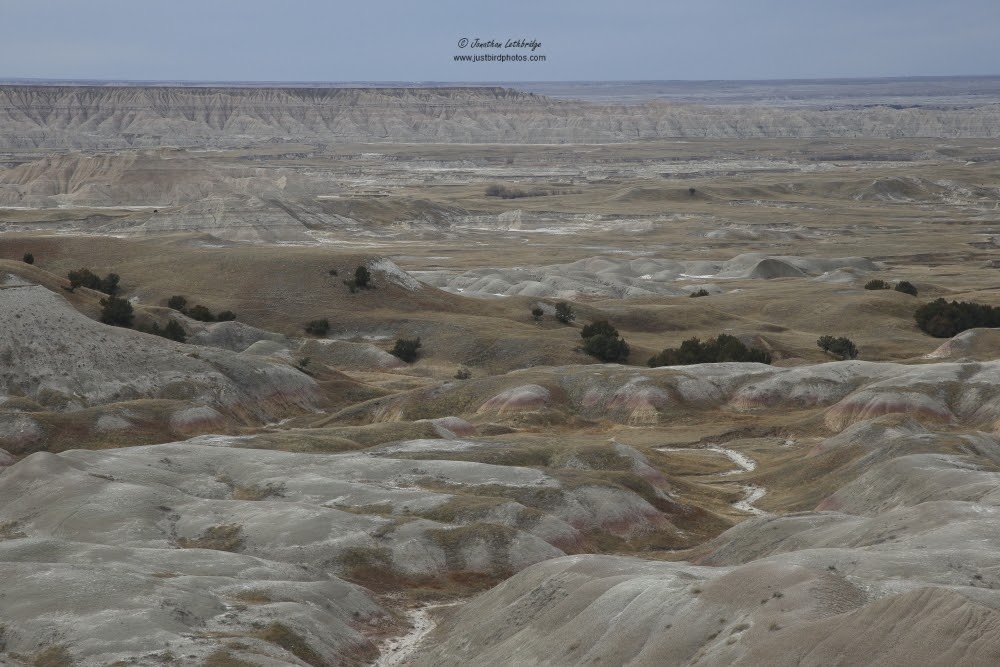 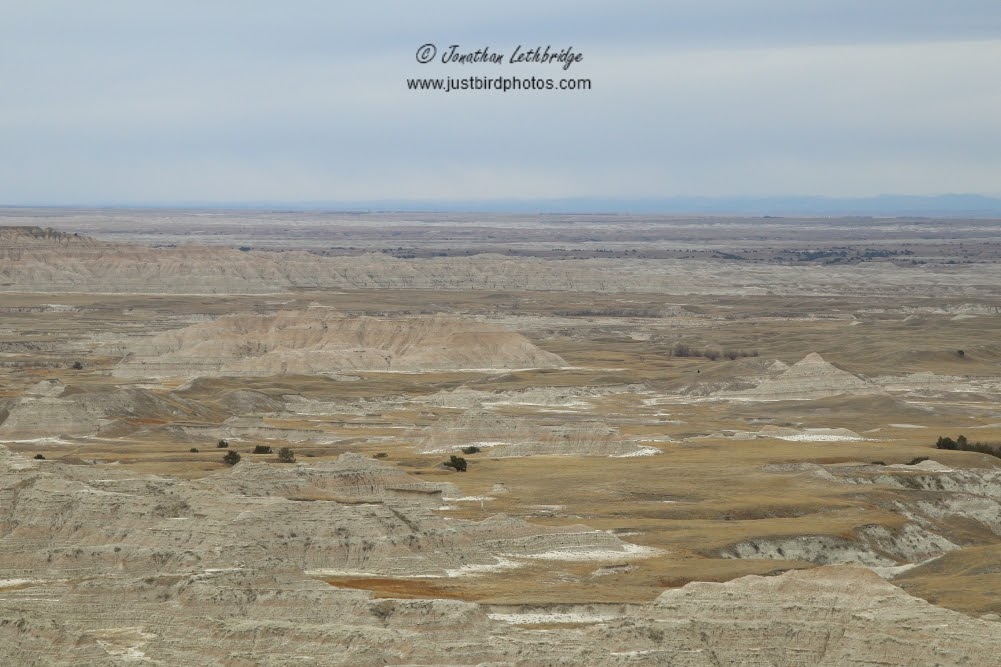 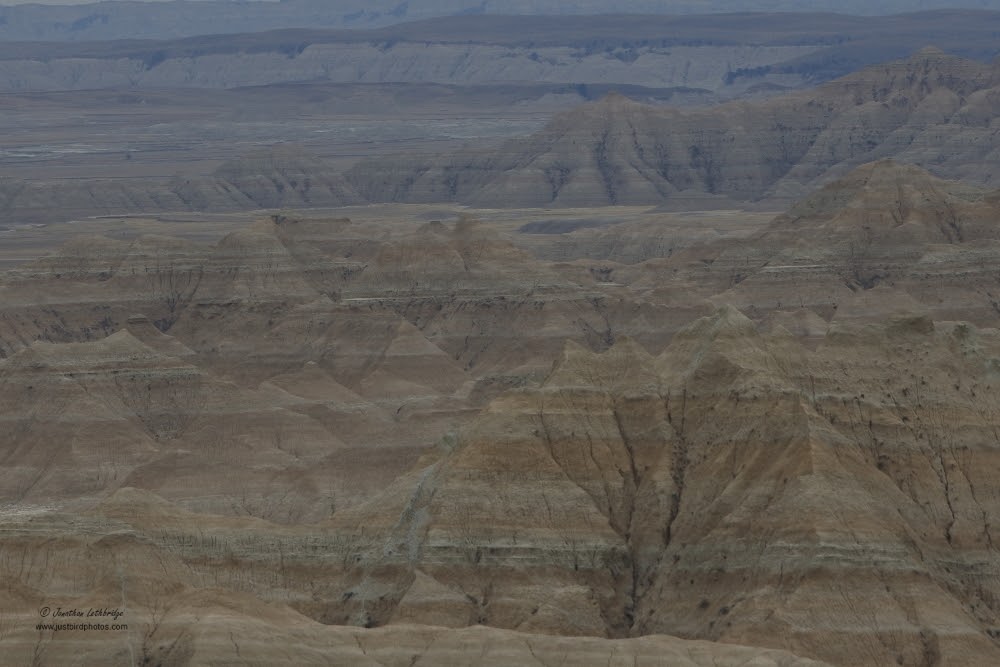 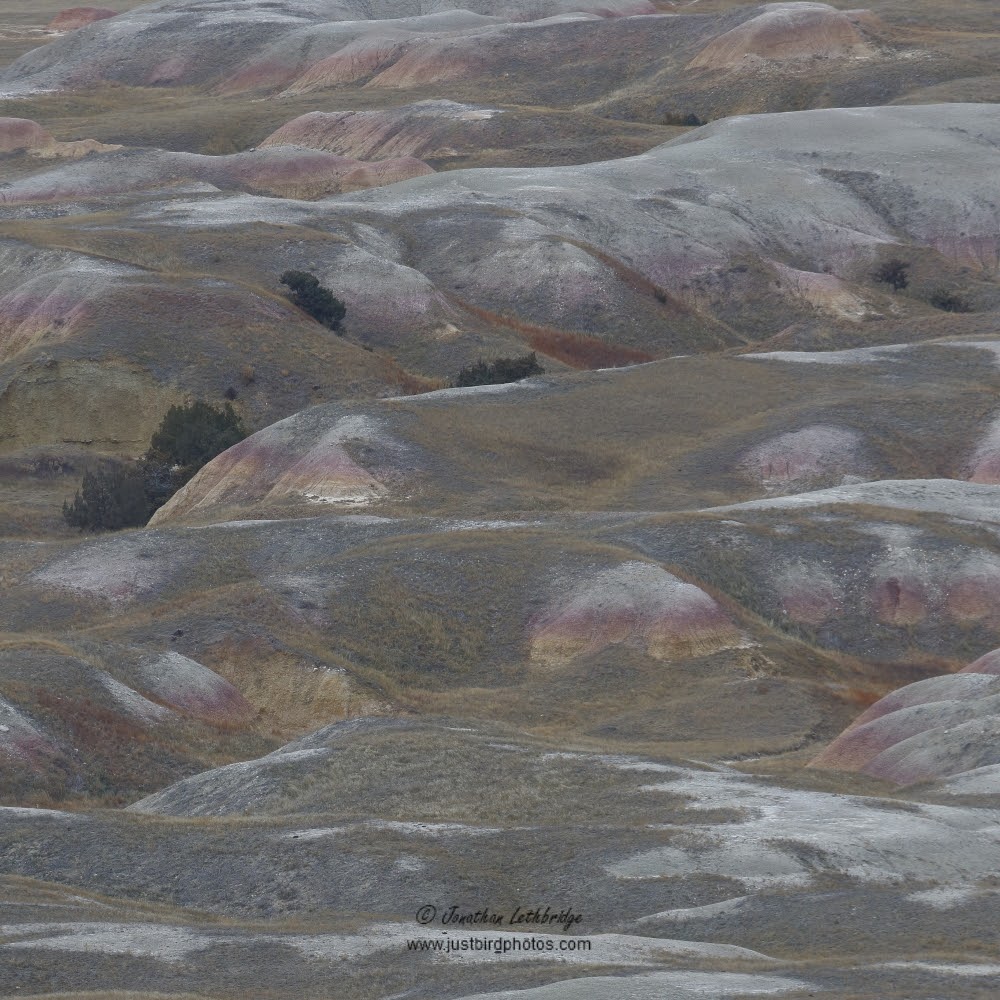 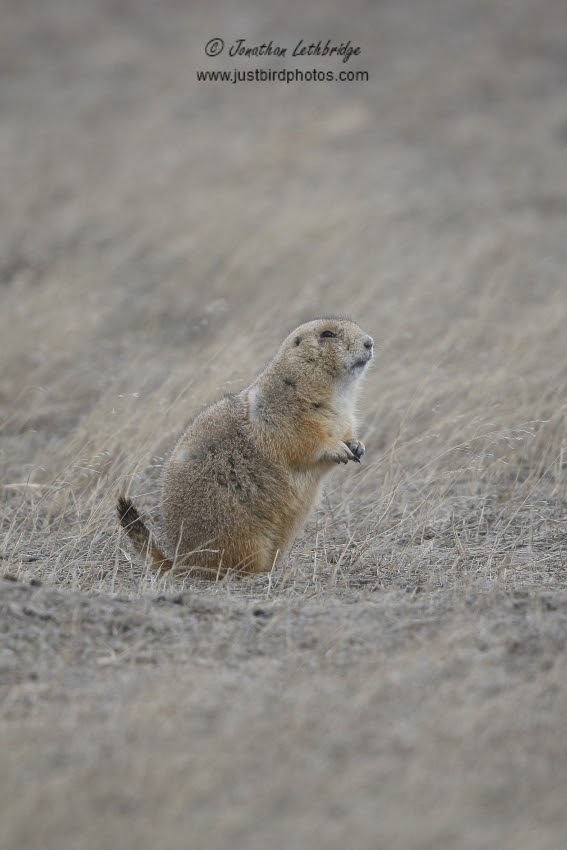 The drive across to Pierre (pronounced Pier) took about three hours on dead-straight roads, and I arrived at about two in the afternoon, so with ample time for birding. The area was bleak, with small bird activity practically non-existent. I found a few bits at Discovery Island, and a feeder at one end of Farm Island had Juncos, American Goldfinches, Cardinals, Nuthatches, Chickadees and Woodpeckers, but anywhere else I looked had nothing of interest at all. Canada Geese and for some reason an extraordinary number of Collared Doves. The wind was so intense that I birded from the car which rather limited my options, but I was able to scope the Missouri River inland of the island, which is known as Hipple Lake - lots of Goosanders. On my flight to Denver the weather had been clear and I had been able to clearly see the enormous tree root-like squiggle of the river from high above, including the main bridge south of the Oahe Dam, so it was a bit surreal to be now driving around it.

I turned in early. Although Pierre is the State Capitol of South Dakota I did not feel it had a huge amount going for it, I suspect Sioux Falls would have been a lot more fun.
Posted by Jonathan Lethbridge at 12:30