My birding day had been going about five minutes before I diverted, finding myself at a dog-walking enclosure called Davidson Mesa. I think it was probably more than this, a large outdoor space with trails and cycle paths, but somehow I ended up in the fenced off dog poop area when in fact I could just have walked along the adjacent cycle path, something I found out on my way back . Awesome. In fact cycle paths were a standout feature of Denver, more than I have ever seen, all high quality and fully paved, and all being used massively. There were still tons of cars everywhere of course, but I have never seen an American city that has made such a huge commitment to cycling. Props. The reason I had stopped the car so early was the sun coming up over the plain and lighting up the Rockies. As per the previous morning there was no way a photograph can do this justice, but with the different vantage point it was equally mesmerising, and livened up by a hunting Northern Harrier over the scrub.

By the way, here is my itinerary - the second part of the plan that I mentioned in the last post. As you can see I break up the day into blocks of time, and the use this to cross reference with the list of species. I plan all my trips like this and it generally works quite well although as you can see I don't necessarily get to everywhere, or perhaps do things in a slightly different order. 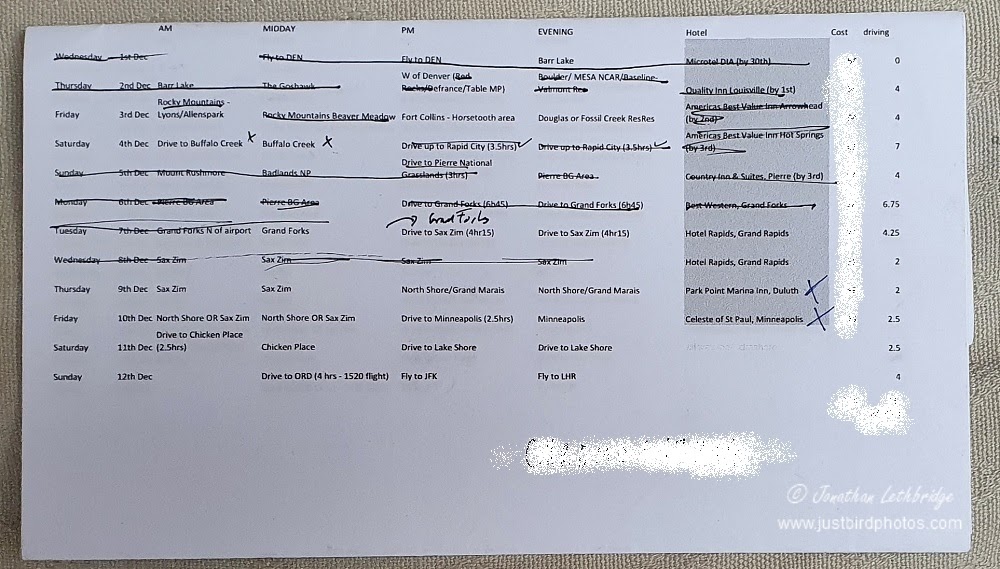 This post is about Friday so I've already deviated - basically playing catch-up from the prior day. My actual destination was not Davidson Mesa but the Valmont Reservoir complex to the east of Boulder, which had been on yesterday's agenda. EBird showed this to have a good mix of species and a spot on the south side where you could park and scan. It was as good as I expected it to be, with literally the first bird seen a Barrow's Goldeneye on the nearest water. Distant, but the light was exceptionally good and the crescent could be seen very clearly. Another target down, and complemented by a good selection of other ducks including hundreds of Goosander and Bufflehead.

I now abandoned the plan entirely, as just a short distance up the road I had found a new spot that looked really promising - Walden and Sawhill Ponds. I spent two hours walking a big loop here, way more time than really I should have, but the ponds had a wide selection of species . Although not what I had specifically been looking for, it escaped me then and escapes me now! But there were tons of close views of ducks, Belted Kingfishers, another Townsend's Solitaire and lots of passerine activity.

By mid morning I was vaguely back on track, birding Old Saint Vrain Road near the town of Lyons which is between Boulder and Fort Collins. It was rammed with birders and bird photographers - I did not know this but the previous day a Pygmy Owl had been found in the canyon. My target was a Winter Wren which I could not find, perhaps too many people around, but a Canyon Wren was hopping around the rock face, three Townsend's Solitaires were amongst loads of American Robins, and my first American Tree Sparrow of the trip was in some brush scrub. I probably spend too much time here hoping for the Wren, and thus was quite late to my next stop, the Cemetery at Lyons. This was billed as a good spot for Woodhouse's Scrub Jay, and sure enough once I reached the top of the cemetery and headed out on the track east across the hillside I found quite a few - very vocal as usual. 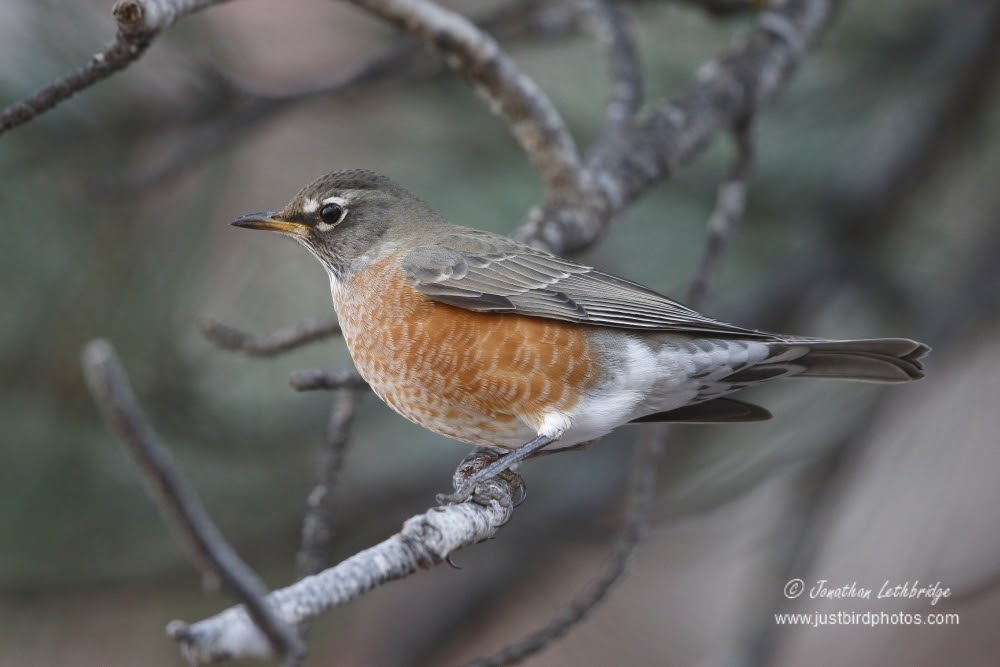 Finally I made it into Rocky Mountain National Park by early afternoon. Blue skies and generally beautiful weather as well as the time of day did not auger well, and although I tried several spots there were almost no birds. In fact I would go as far as to say it was terrible, in particular Upper Beaver Meadows which had seemed so promising had a count of three species, none of which were the ones I was after! The Matthews-Reeser Bird Sanctuary at the end of Lake Estes was similarly poor - really hard work for almost no reward. Looking back at other peoples' lists on eBird I can scarcely believe I had birded the same spots but that is just how it goes sometimes. To add insult to injury US-34 which would have completed my loop and taken me to Loveland and Fort Collins was closed and I had to return on US-36, the same way I had come. This placed me a good 20 miles further south than I wanted to be and also meant I missed out on a tagged site for Pinyon Jay. So all in all a day which had started well with the duck but that had gradually seemed to dwindle away. Still, tomorrow was another day and there were still plenty of sites close to where I was staying that showed promise, albeit that I needed to get to South Dakota by the evening, a drive of somewhere between four and five hours.

Posted by Jonathan Lethbridge at 12:00