I arrived into Denver at about 3pm, and this being my country was through immigration very quickly indeed. Nobody checks anything if you're American, least of all Covid documentation, which combined with a complete lack of checks in London was rather worrying. Hassle free for me though, and I'd done everything right anyway so was pleased not to have to waste any time proving it.

This left me with just enough daylight to pick up my hire car and make my way to Barr Lake State Park which is just north of the airport. This was actually my first planned stop for the following day, but visiting now to tick off a few bankers meant I could be ahead of the game. And that's what it is really, a big game. My hire car was supposed to have been a regular SUV, real enough to have 4x4 and so on, but not really a go-anywhere car. In the event I received a very welcome upgrade to a Chevy Suburban, an immense black beast that you generally see accompanying US Presidents. This had enough room for me, my entire family, as well as the family next door. I used the passenger seat for optics, and in some cases to set up my tripod and scope so I could bird out of the cold and wind, but the second and third rows of seats went entirely unused the whole trip. It was superb, supremely easy to drive, had heated seats, and got me everywhere I wanted to go. The fuel economy of 19mpg was less good, especially with the distances I was driving, but this being America..... 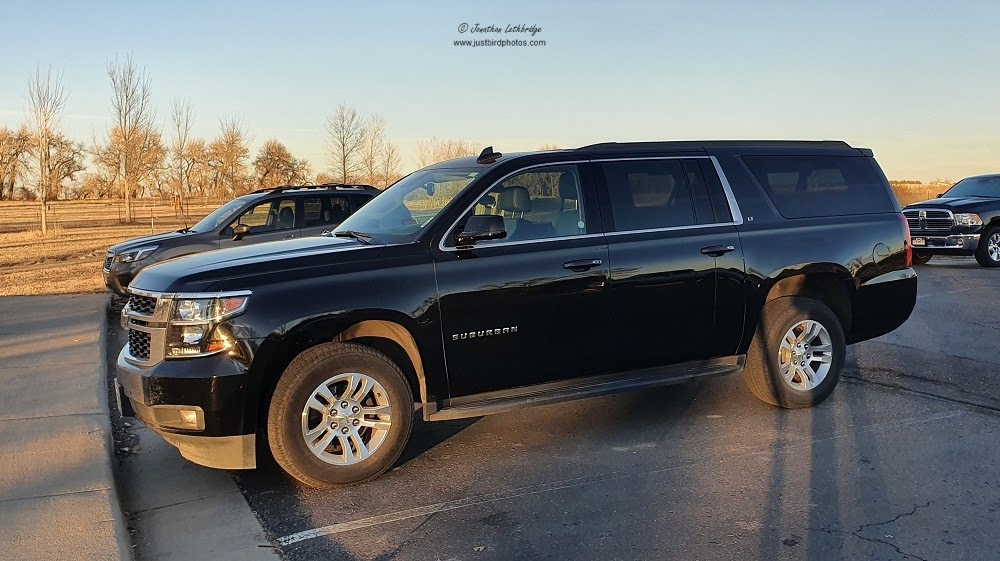 By the way, if you want to feel utterly hopeless about the state of the planet and where we are headed - if you don't already that is - just head to America. You will soon realise that any small modifications that you make to your lifestyle here, such as getting an electric car, cycling everywhere, giving up meat, reducing flying, that kind of thing, are totally futile in the face of the juggernaut that is the American dream. This is a country based around the freedom of the automobile, it dominates everything, everyone is an addict. Huge trucks like Ford F150s and Dodge RAMs are almost the default, engine sizes are immense, small roads are five lanes wide, and everyone drives everywhere. I saw people reverse into their drive so they didn't have to get out of the car and walk 15 feet round to their mail box, and then turn around again and drive to the house. Fast food chains are omnipresent, most with queues at all hours, aside from the farming aspect the sheer amount of packaging and waste that they generate is simply incredible. Just look a square block in an average American city and count the food outlets, count the cars, the pickups, the tractor-trailers, count the shops selling all manner of material goods, and then try and extrapolate that across the nation, 24 hours a day, 365 days a year. It's incredibly depressing. So yes by all means feel good about yourself for your self control, your restraint, your abstinence and probably in some cases your unhappiness, but know that your contribution, or rather your lack of contribution, is completely pointless. You might as well go and enjoy yourself with what time you have left, everyone in America is. Despite the now annual wildfires, the droughts, the tornadoes, the hurricanes the mudslides and the flooding, the inevitable future is somewhere else, something somehow remote. How on earth you enact any meaningful change in the US is beyond me, it is simply incredible to witness. But it did make me feel less bad about driving the Chevy. 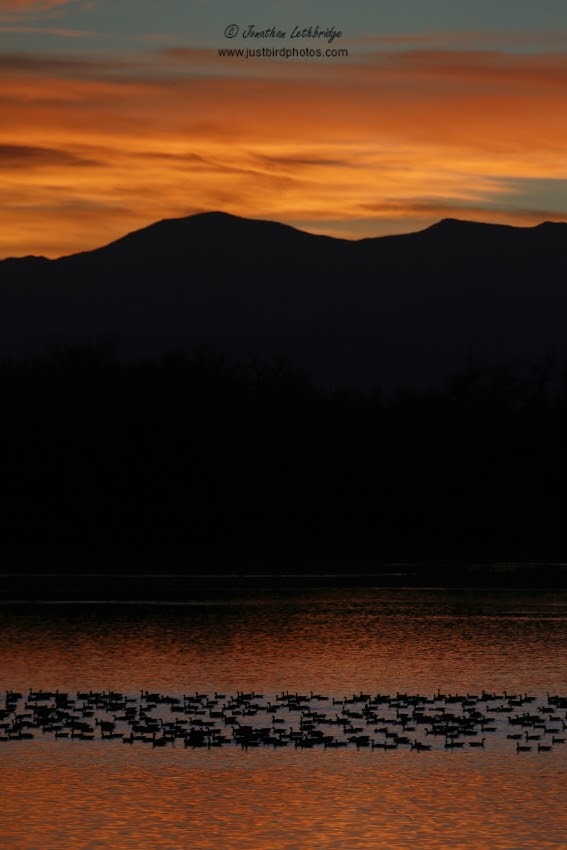 Barr Lake was a hive of activity. The lake shore was carpeted in thousands upon thousands of Cackling Geese, my first new species of the trip, and the noise was unbelievable. Nearly dusk, birds continued to pile in in vast numbers. Amongst them were a handful of Snow Geese and a Ross's Goose, hangers on from far-flung lands. Most Duck species were countable in the hundreds, and Bald Eagle sentinels kept watch from bare trees. The sunset over the eastern fringes of the Rockies was spectacular. So far so good.

Posted by Jonathan Lethbridge at 14:05