Unsurprisingly I have spent a huge amount of my spare time on the patch this year, during lockdown it was a vital refuge, somewhere to unwind, to temporarily forget about the big bad world. And this means I've seen some birds. Quite a lot in fact. It started well on New Year's Day, with the Goosander, White-fronted Goose and Med Gull from 2020 all still present, but it was the cold spell in February that really propelled the year list along. Bear in mind that Febuary normally delivers nothing as you see everything there is to see during January. Then you have to wait until the first migrants arrive in March so February is easily the most boring month of the year other than June. But not in 2021, the freezing conditions brought Lapwing, Shelduck, Wigeon, Kittiwake, Snipe, Golden Plover and Woodcock in a six day period. So by the end of the month I found myself on 85 - my best ever total in February. All of a sudden I was competing with myself.

I quickly knocked up a spreadsheet to see what my targets were. It was also in fact better, by one, than any total I'd previously achieved by the end of March which was quite interesting. More interesting was that I'd never got to 100 by the end of April, and seeing as I love a round number...

It was definitely on - the glut of spring migrants in April would easily see me over the line. What I hadn't counted on was the return of winter. Wheatear arrived more or less right on time in March, but other than that our migrants were very thin on the ground. It was so cold that we started to get Gulls again, and these helped to make up the numbers where migrants were lacking. The weather can only hold things back for so long though, and some intrepid birds will make it through no matter what and you only need one. So despite the cold starts I've continued  to pick up a trickle - an early lone House Martin, a handful of Swallows and Sand Martins, a couple of Yellow Wagtails, a Redstart and a Ring Ouzel. On Sunday I found my first Whitethroat scratching away, and then this morning after a fruitless three hours on the patch a Swift carved over my house as I was on a work phone call and gazing skywards. Ton up! (full list here) 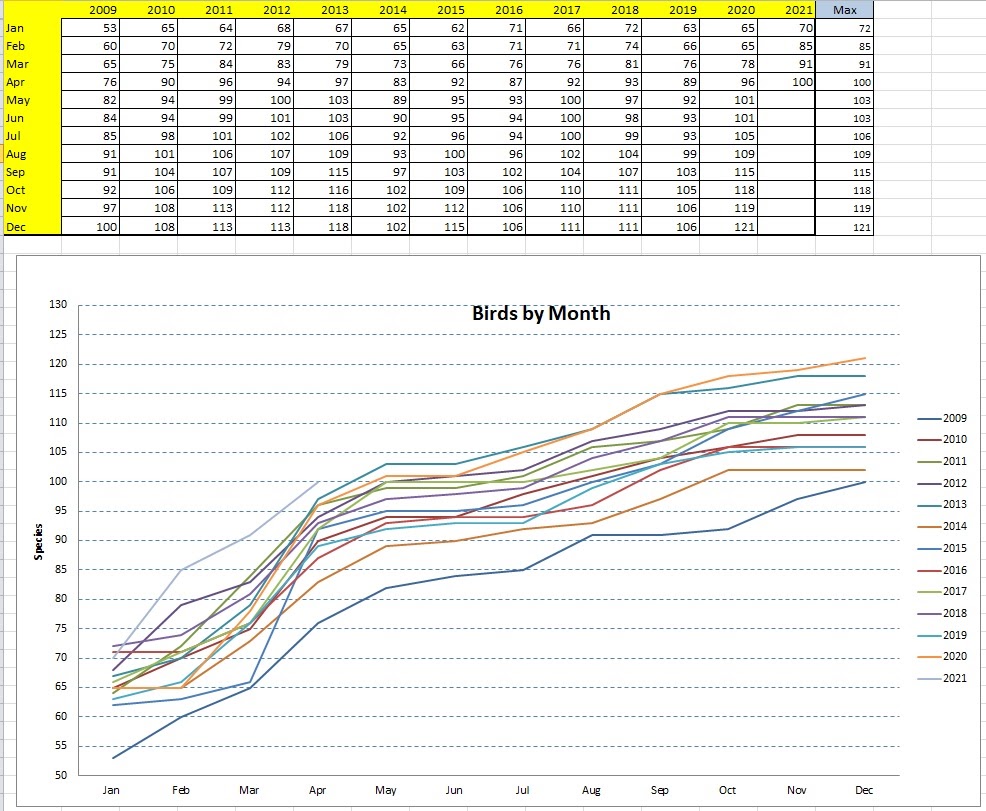 My previous highest total by the end of April was 97, way back in 2013. With over a week to go, my May/June highest total of 103 would seem to be at risk - there are plenty of what I would term regular birds remaining; Lesser Whitethroat, Garden Warbler, Reed Warbler, Tree Pipit, Whinchat, Common Tern, Hobby, Common Sandpiper..... throw in NocMig (disappointing so far but surely must change soon) and simply an interesting time of year when anything could happen, and surely this is going to be possible. There is just one tiny problem.

If all of this comes to pass a potentially very slow autumn beckons!