In praise of continual sound recording

Regular readers will know that in addition to being a bit of a nocmig convert I have also started to try and record whilst I am out birding. I want to nail that bird that frustratingly calls only once and not again - last week BirdGuides put out an excellent article written by Ed Stubbs discussing exactly this. Most of my attempts to date have been dismal failures - too much noise from me. I have tried having the mp3 player in my chest pocket. Hopeless. In my trouser pocket. Hopeless. Hanging from my belt. Especially hopeless. Then I tried taking my shotgun mic out with me, poking out of a trouser cargo pocket, but in addition to looking very stupid it too simply recorded my footsteps, my legs, the rustle of my clothing, my breathing.... Hopeless.

Separation appears to be the name of the game. I've seen a couple of set-ups that involve a microphone attached to the rear of a backpack at about head level, and whilst I am sure that is probably pretty good I have an active dislike of bags, particularly backpacks. And of looking like Boba Fett whilst out birding. No, not for me. But I did cave in on a small man bag on a recent trip to Norfolk. The bag was slung across my chest and sat on one side of my waist. I simply stuffed the mp3 recorder complete with a "deadcat" muffle thing into a webbed pocket on the outside and hoped for the best. It did pick up tons of surround sound and all the usual noise I create, but it also did the business with a certain popular far eastern vagrant.... No not the Shrike....

Yellow-browed Warbler! Here I was stood around having a bit of a natter, but the recorder does not miss a trick. This bird was later seen, but about an hour earlier I had stopped in my tracks with an exclamatory "oh, was that...?" and of course that was it. However I noted the time and once home listened to the segment in detail. Bingo! A bird that would have been thrown away due to uncertainly is now nestling cosily in my virtual notebook (eBird). 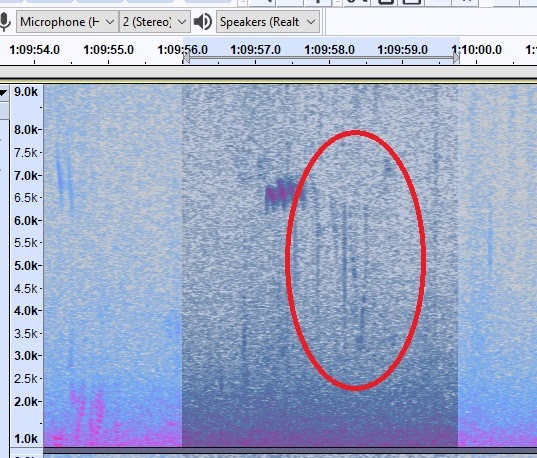 I've circled the relevant part. It is a bit vague as the bird was a little distant, but right in the middle you can see a deep V, like a long hairpin, down then up. Tsoo-ee-weet! Nailed. Now on both recordings I was standing still, and that would seem to be the key. Not constantly chatting would probably also help but on both occasions the birds only called once, and on both occasions the recorder clearly picked them up. I don't know how to operate playback on the mp3 recorder in the field, but I might learn as if it were a properly rare bird I would probably want to listed to it immediately. Anyway, success! Success that unfortunately involves a bag but success nonetheless. It was a small bag though, just large enough to be able to conveniently hold my sandwich and the prerequisite autumn Double Decker in the other mesh pocket, so I may be able to live with it until I come up with something even better.

Back to that article. In addition to field recording of the sort I've just described it also talks about stationary recording, for example if you were viz-migging. I don't get much opportunity for that, but on days where I can work with the doors and windows open I am now also recording from the balcony, just as I would overnight. There may not be many of these nice warm days left, but this morning I chalked up another little success when some Redpolls (denomination unknown, see here) flew over. I knew that Redpolls were on their way, indeed I'd had a few on the coast on Saturday, but I most enjoy Redpolls in Wanstead. At about 10am this morning, beavering away on some spreadsheet or other, I heard the familiar chipping from outside. In my excitement I ran out to the balcony thus completely obliterating the recording, but a little later once I had calmed down there was a repeat performance and this time I didn't move a muscle!

I give you... Redpoll. Likely the Redpoll Formerly Known as Lesser, C cabaret, but whatever. It is #82 for my lockdown list which I think is pretty good going, and barring Brambling whose tired wheeze I also hope to hear and record a little later this year, completes what I would call the expected birds for my garden (although Redpoll isn't actually annual). Anything else will be a bonus, but with the aid of sound there may yet be a few surprises in store. And I for one remain quite excited by the prospect.,

Posted by Jonathan Lethbridge at 18:47