Ebird, magnificent though it is, is also rather dangerous. I discovered recently that it kept monthly totals of my birding exploits, and was amazed to see that for instance I had seen 146 species in August this year. It was apparently the highest number of species I had ever seen in the month of August, no doubt aided by a trip to Scotland and a small amount of indulgent birding down south a little further afield than Wanstead. I forgot to take a screen shot however there was definitely a year where I had seen just 12 species during the month of August which is pretty pathetic even by my standards. Driven by a curious need for things to add up I spent an age uploading historical lists last December and the, err, benefits of this are now becoming clear. This is obviously not something I had ever thought to count, although I understand that some birding Professors are quite keen. I did however go so far as to have a look at what I hadn't seen this August before dismissing it as folly of the highest order. Imagine chasing round after stuff just because I hadn't seen it during the month? Imagine when the month ends and the counter is reset to zero - would I really run around the place trying to see the same birds again? No. Listing can be fun but there are limits. Anyway, August is over, the counter has been reset, and now I can see what September looks like. And as you can see I have not exactly rushed out with a mad listing urge. 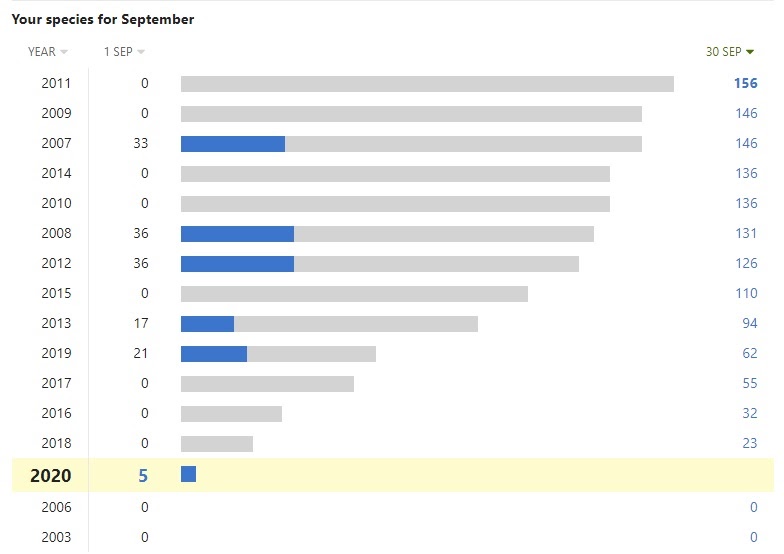 156 is the total to beat, set nearly nine years ago when I was much more likely to head off twitching things. I can't see it happening, but it is an interesting chart of my various birding ebbs and flows.

Another thing it can do is track how many birds you have seen each month across all years. I have something like 16 years of UK data of varying completeness loaded up so I immediately looked up June, expecting it to be somewhere between 20 and 30. Everyone knows June is the dead month, the month when nothing of birdy note happens. Well I am afraid the stats suggest otherwise. 194. OK, but it is the worst month, isn't it?

November (184) is actually my least bird-filled month, followed by March (189) and only then June (194). Can anything be read into this? Is it that by the time November comes around I am all birded out, the winter stuff is all in and combined with cold weather I just can't be bothered? But what about December (197), surely that should be worse, or is that marginally higher because I frequently visit family in Scotland during that month and need to get out of the house....? Can March be explained by a departure of wintering birds but very few arrivals? Does any of this actually need explaining at all?

Far more interesting is that the peak is now upon us. September (259) is one of the two best months of my birding year. Top spot goes to October (268) but there is not a lot in it. What this tells me is the following.

It is time to go birding. See you out there.