Day 4
I birded both sides of the river from the road at first light. The east side was better, with lots of White-eyes and Collared Finchbills, and finally Morrison’s Fulvetta. I had in fact seen them before but had consistently misidentified them! There were also two Taiwan Barbets closer to the village and a Rufous-browed Babbler. The other side had a large number of Himalayan Black Bulbul, and good views of a troop of Formosan Macaques. I also added White and Grey Wagtail on the road, and Large-billed Crows were numerous. Today I was definitely keeping to time no matter what, and so carried on down to Taroko having got the bird I needed.


At Tianxiang I stopped to look at a bird that had been perched in the middle of the road at the exit from a tunnel, and in looking for it (it was a female Plumbeous Redstart) I chanced upon my first Taiwan Whistling Thrush. It was enormous, I hadn’t appreciated from the field guide how large they are. Dead pleased with this, another critical endemic, my next roadside stop produced the hoped-for Styan’s Bulbul, as well as the first White-bellied Erpornis, which is another potential split one day. There were also some bulbuls that may have been hybrids between Styan’s and Chinese (Light-vented); their ranges overlap here. 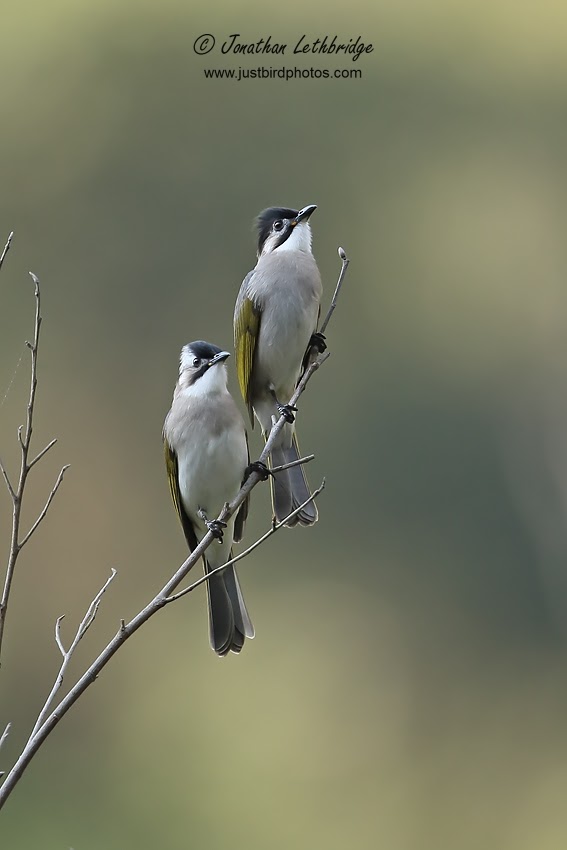 I then drove through the gorge which was breathtaking. Unbelievable in fact. Everywhere I stopped was a magnificent view, generally accompanied by a singing Plumbeous Redstart – I think I saw eight in Taroko in the space of two hours. One of my first versions of my itinerary had missed this area out on the basis that there was almost a total crossover of species between Daxueshan and Wushe-Wuling, and had Daxueshan been more productive I might never have come this way and seen this. I was glad that I had. 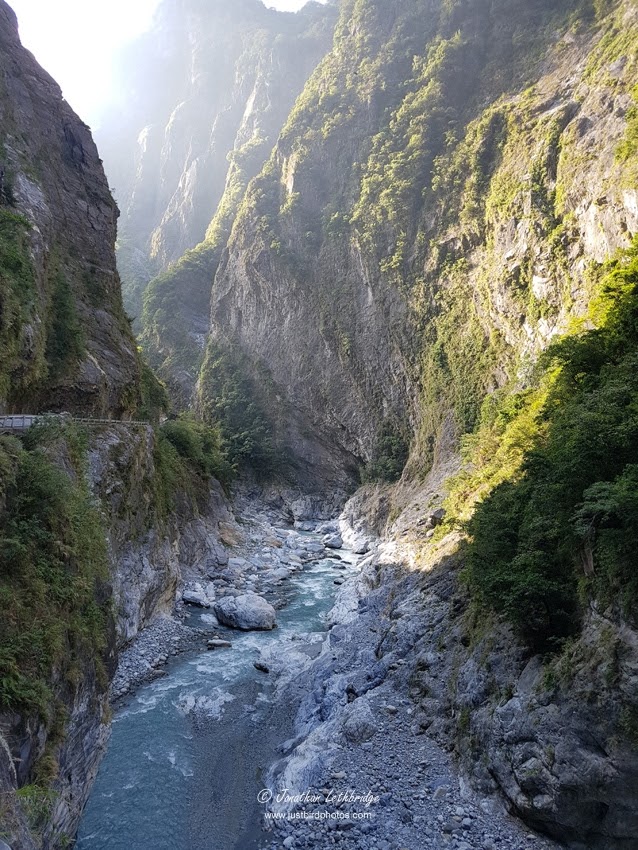 At Bulouwan Service Centre I concentrated on the lower and upper Terrace trails. The lower had the most birds, including some mixed flocks which contained Arctic Warbler, Black-naped Monarch, Taiwan Yuhina and White-bellied Erpornis. Yet another Taiwan Whistling Thrush called from down the slope. The upper meanwhile had at least four Taiwan Barbets feeding in a fruiting tree, and a nice flock of Taiwan Sibia. Back in the car park I tracked down a calling Grey–capped Pygmy Woodpecker in with a flock of Varied and Green-backed Tits. There were also plenty of White Wagtails and Pacific Swallows cruised overhead. This was a place I should have devoted more time to, but I simply couldn’t – Malayan Night Heron and Taiwan Blue Magpie were important birds to get and I had less than a day to go. Reluctantly I drove down to the coast road and headed north towards Taipei.


The journey as far as Yilan took forever, more than three hours. There were an inordinate number of works traffic lights and single file traffic. There is a huge construction program underway, which looks to be to do with drilling a series of huge tunnels down the east coast to replace large parts of the winding coast road that I was on. When complete it should make the east coast route very much faster but at the time of writing it made it a lot slower. Still, the scenery was nice, and at some point I saw a Crested Serpent Eagle cruising around.

I broke the journey at Yilan, arriving at around 1pm rather than midday as I had hoped. Drastic measures and all that, but this meant my time at the Lizejian Wetland complex was restricted to an hour. This was enough to add quite a few new birds to the trip list, but not to fully explore the area. It was a good site for raptors, with Chinese Sparrowhawk, Osprey and a hovering Black-winged Kite. There were stacks of Egret and I amused myself by trying to ID Intermediate Egret without referencing other Egrets. This was a lot harder than I thought, in the end I did have to find one standing next to a Great White Egret to be absolutely certain. Then again, je ne regrette rien…. I found several Marsh Sandpipers, flushed a Yellow Bittern from one of the many bunds that separated the small flooded fields, and a solitary Whiskered Tern fished near the main bridge.


In the end I managed to drag myself away after an hour and a quarter and made for the Taipei Botanical Garden which I reached by about half past three. I found a parking spot directly next to the entrance which was extremely fortunate. I wasn’t at that stage quite sure what the ticketing arrangements were, but the birds came first and I resolved to deal with it later. In short just find a space, you can pay at your convenience. I didn’t have the field guide, so I used the Collins App to show people a photo of a Black-crowned Night Heron, hoping it was close enough. One of them dutifully led me to….a Black-crowned Night Heron. Doh! In the end it did not take long to find a Malayan Night Heron myself in the northern part of the garden, just pottering around in a flowerbed – remarkable! I took a few photos and then headed back to the car – for a moment my heart was in my mouth as there was a ticket on the windscreen but I soon worked it out, you just take it to a 7-11 and pay it there. It appeared to be 50 TWD per hour. 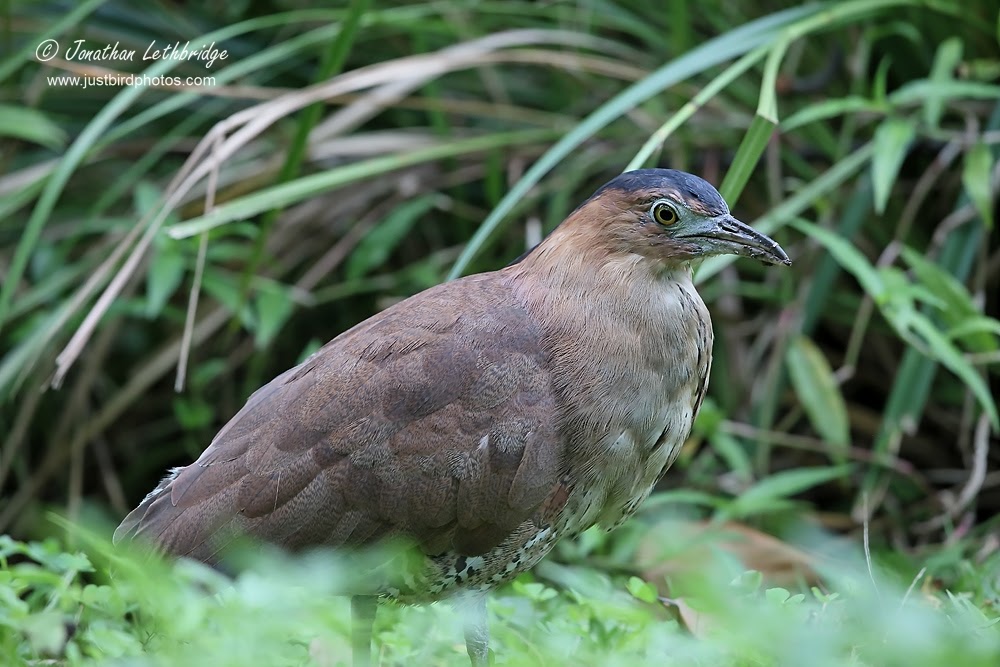 I then drove through very busy traffic to Huajiangyanya Natural Park, also known as the Tapiei Geese Protected Area. I had found this area on eBird and it looked very good. I parked the car right next to the site, and also right next to…another Malayan Night Heron, this time a juvenile bird, wandering across the grass next to a busy street without a care in the world! There seemed to a twitch going on, as I could see a row of birdwatchers and tripods a short distance away. No doubt it would prove to be some kind of European dross that I had zero interest in! I was spot on as it happened, as they were all looking at a Eurasian Spoonbill! I seem to have form with this species in the wrong location, I found one on Barbados once. I would have much preferred it to be a Black-faced Spoonbill, but at least I had seen that species before in Hong Kong. Anyway, all the locals were rather excited, and one of them also pointed out another rarity to me, a Bean Goose. Good birding, with lots of Waders, Egrets and Mynas in some excellent habitat, but the only new birds beyond the ‘rarities’ that I could add were Black-collared Starling and White-breasted Waterhen.

That concluded my birding for the day. With a flight at about 2pm the following day, the only endemic species that I could still hope for around Taipei was the Taiwan Blue Magpie which was most likely around the village of Wulai, which is a hot-springs and spa destination about half an hour south of central Taipei in the foothills. I drove there through a very lively Taipei district called Wanhua, and had an excellent meal about half way there. The hotels were a little more expensive in Wulai than I had hoped, but I bargained the Karuizawa down to 2000 TWD which is about £50 when I couldn’t pay by credit card as their machine was broken. The parking attendants were on point, getting a ticket on my car within ten minutes, and as it was a “per day” rate, another at an impressive 19 minutes past midnight that I discovered the following morning!