Day 2
I woke up at 6am and it was perfectly light! Somehow I had managed to sleep for hours and hours, and now needed to get cracking. I went and had a wash at the toilet block, had a 7-11 pastry, and went birding. I was hoping for Mikado Pheasant, often seen around this area at first light, but my dreams went unfulfilled. Walking the track that goes up to the lake behind the visitor centre I encountered a flock of Taiwan Yuhina, followed quickly by two Collared Bush Robins. Around the lake were mixed flocks of small birds flitting through the pines, Green-backed Tits and Coal Tits (race “ptilosus” which have a really pronounced crest), but best of all Flamecrests, another Taiwan endemic. Also here were my first White-whiskered Laughingthrush, a Taiwan Fulvetta in some bamboo, a female Vinaceous Rosefinch and a group of Steere’s Liochicla.  The commonest birds were Nutcrackers, always a good sign.


Walking back down to the visitor centre I took a new path, track 230 (24.290399,121.025508). This is also closed to vehicles and is a known site for the pheasant, but after walking about 2km all I had to show for it were more Flamecrests, Green-backed Tits and a Large-billed Crow. Surprisingly quiet, and despite the lengthy list of endemics I had seen I returned to the visitor centre rather disconsolate as on such a tight timetable it looked like my one and only opportunity for Mikado Pheasant had passed. By now it was 10am and the first coaches were arriving, depositing crowds of brightly-coloured and extremely noisy tourists all keen to go and enjoy the great outdoors. It was time to leave. I tried my luck at the km 48 car park, even walking up to the watchpoint (24.265866,121.033828) and back, but still no Pheasants. Barely any birds at all actually, it was absurdly quiet.


Things picked up at around km 37 (roughly 24.251143,120.984155). I had been stopping frequently wherever there was space to pull the car over, and in the trees below the road and thus at eye level I found a large mixed flock. This was dominated by Taiwan Yuhina, stunning Black-throated Bushtits and Green-backed Tits, but in amongst them was a smart Taiwan Yellow Tit – the only one I would see. Accompanying this flock was a Rufous-faced Babbler, a number of Rufous-faced Warblers, a couple of European Nuthatches and a pair of Grey-chinned Minivets. It was a great half an hour, and it was also around here that I saw my first Ashy Woodpigeon, a bird I was to hear far more often than see.


Descending further to km 35 I met Richard Foster and his group again on track 210, who advised that it was a dead as yesterday. They had stayed outside the park and were birding their way up, and advised that the downstream path at km 14.5 had been good earlier in the day. I bypassed km 23 which was a total zoo and went back to the river and walked the track along the north bank to 24.237713,120.907103. Here I found my first Taiwan Scimitar Babbler, an Arctic Warbler, and a pair of Plumbeous Redstarts. Better than this I also flushed three Taiwan Bamboo Partridge, again the only ones I was to see all trip. Nearly back at the car I noticed a large raptor high overhead – Indian Black Eagle! 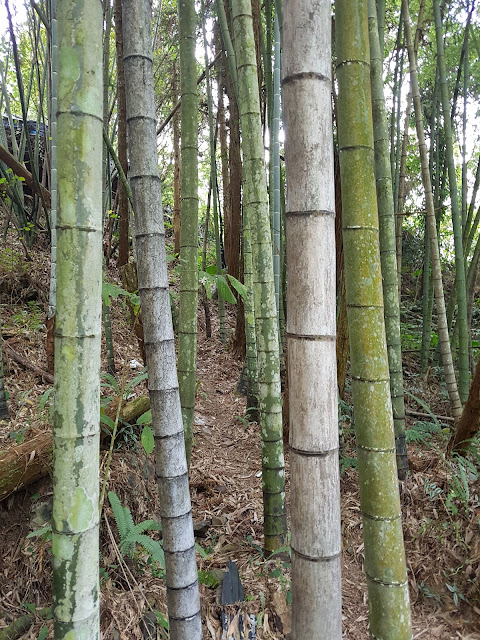 Back on the main road by the Dadong Police Station I stepped into the edge of a garden to observe a busy tree (Varied Tits and Himalayan Black Bulbuls). A resident came out to see what I was doing, and turned out to be French. She was living with an American and a Taiwanese lady, and they were all doing kibbutz-style agricultural tourism. The Taiwanese girl had never used binoculars before and it was special treat to see her reaction when she got the Bulbuls in view. I was invited in for soup and cup of tea which was really nice, and had an extremely good chat with some very interesting people. It is little asides like this which really help make a trip.

In the failing light I drove to Ren-ai Township, a good two hours away, to get in position for the next day. Along the way I managed to order a nice roast duck meal and found a tolerable B&B to stay in. It had been a long day, shame about the Pheasant but what can you do? My list of endemics was already looking very decent, and I was in prime habitat for more.