Day 3
Up early again and quickly drove the 9km to the start of what is known as the Continuation Trail, or Kilometres 3-5 of the Blue Gate Trail. This is at 18km (again the road is marked with distances), about 600m down a side road to the north which has an obvious Police Station at the top. I drove down to where I thought the trail cut across this road but could not find it, and so turned the car around thinking I must have missed it. This is when disaster struck. The road was surprisingly busy at 6am, and is mostly very narrow. On the way back up I had to take evasive action from a blue truck that was hurtling down and in doing so there was a tremendous bang as I went over a rock that must have been hidden under roadside vegation. It felt really bad, and I limped up to the main road and pulled over to inspect the damage. There was a horrible noise coming from the right hand side of the car which I presumed was either my tyre deflating or some vital liquid leaking from a sheared pipe. Getting out the noise was in fact coming from a drain that I had parked on top of and not the car, however my tyre was shafted, with a tennis ball sized protrusion on the side wall. My plans today included driving over the highest road pass in Taiwan, there was no way I could risk that in this state. I checked the boot for a spare but there was just an empty well - thanks Avis. What to do? It was 6am and nowhere would be open, so I just left it there next to the Police Station (which was closed) and went birding.

The start of the Continuation Trail was in fact just a little further down from where I had turned around, and despite the car problem weighing rather heavily on my mind, I was into great birding immediately. Almost the first bird seen was a Taiwan Wren Babbler (Cupwing). It was in near darkness by the side of the damp trail and called incredibly loudly. I managed to gets bins on it as it hopped in the leaf litter and then it teleported away. There was nowhere it could have gone but it literally vanished into thin air and I couldn’t find it again.

About a kilometre further on I found a Taiwan Barwing creeping around a tree, and very close by a Taiwan Shortwing in the bottom of a bush. What a spot this is! I followed the trail to where it ends in a large landslide, and found another Shortwing and another Cupwing here. The Cupwing was again in leaf litter, and this time I saw what the other one had done. I was only about six feet from it when it popped out of the leaf litter, gave a loud buzzing call, and then dove about 2 feet horizontally back into the leaf litter and vanished. I remember a Lancey doing something similar on Shetland once. Unfortunately I didn’t get a single photo along here, the birds were impossible and it was virtually dark!

As good as the birding was, the tyre continued to play on my mind and I knew I had to get it sorted before I did anything else. It was now 8am and probably things like garages would be opening. Back up at the Police Station there was a Policeman, and I showed him the wheel. At least it was an obvious issue I could point at, as my Mandarin extends as far as “rice” and things like that and not “I need a replacement tyre please”. He went into the station, got his phone and spoke some Mandarin into it. I was hoping he was calling a good friend of his who ran a local garage, but actually he was just using Google Translate as I had been doing, and his phone soon told me that it was “advisable that I go to a car repair factory as soon as possible”. Quite. There was nothing in the direction I wanted to go, so I limped back towards Wushe and stopped at a petrol station. A bit of gesticulating occurred and I established, once again via Google, that there was “a car repair centre 15 minutes down the road”. Remarkably I managed to find this without the tyre giving out, but the owner just shook his head and said “Puli”, which is a township a further 40 minutes down the mountain.

I nursed the car to Puli, which was a lot bigger and had lots and lots of car repair places to try. I chose one of the red dots amongst a gaggle of dots in case I had to try several, but the first place I stopped at was perfect. It was run by a husband and wife team who got to work straight away whilst I went to a nearby 7-11 for cash. When I came back the car was jacked up and the new tyre being prepared so I had time for a pot noodle as an early lunch. The garage had a hot-water cylinder as most places in Taiwan seem to, but as I started to make it it was literally ripped out of my hands and prepared for me, and then I was ushered towards a sofa (yes, the garage had a sofa), sat down and given a set of chopsticks. The car was soon back to four wheels again for a very reasonable 2400 TWD (c£60 – KwikFit it ain’t) and the owner pressed a cup of coffee into my hands and waved me on my way. It took over an hour to get back to the birding trails. I had lost two hours and forty minutes of birding as a result, but I felt hugely upbeat now that this was resolved. Sometimes this is just what happens and you just deal with it. I did see another Indian Black Eagle along the way though.

This time I birded the first section of the Blue Gate Trail, starting at km 15.5. Mid-morning this was Flycatcher central. Vivid Niltava, Ferruginuous Flycatcher and Snowy-browed Flycatcher all showed well, along with lots of Black-throated Bushtits. There were at least three Ashy Woodpigeon along this trail as well, but the views were very difficult. 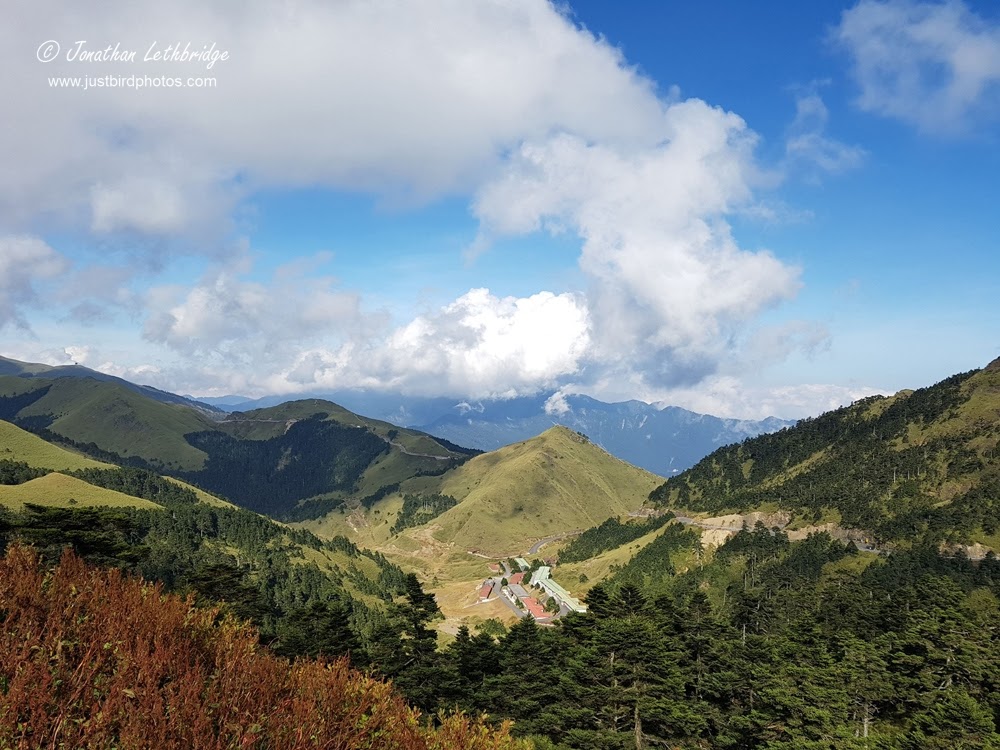 By now it was midday – I had hoped to be at the Hehuanshan Pass by now! I raced back to the car in double-quick time and started heading up. I made slow progress as I felt compelled to stop everywhere and have a quick look and listen. This gained me a Yellow-bellied Bush Warbler at around km 24, but actually the best birding was at km 29 just below the pass. Here, on the edges of a large car park, were some very tame Vinaceous Rosefinches and White-whiskered Laughingthrushes. Nearby a family party of Grey-headed Bullfinches were in a pine tree, the only ones I saw. I spent a long time here trying to find Golden Parrotbills in the bamboo as well as Alpine Accentor on the rocks, all to no avail. Now I had a problem. My plan had been to be at Tarako by 3pm to find Styan’s Bulbul, and then drive to Yilan after sunset, but there was no way I was going to make it. I could either forgo the Bulbul, or stay overnight in Taroko, get it first thing, and then spend two hours of daylight getting to Yilan. I chose the latter as I also wanted to see Taroko Gorge in the daylight. It would mean cutting out some of the sites around Taipei but would probably not cost me any species.


Decision made, the pressure was slightly off now, and I could bird through towards Taroko in a reasonably leisurely fashion, stopping off a places that looked good. In doing so I finally got some sort of photo of a Black-throated Bushtit, and improved upon Flamecrest and Yuhina. I also added Asian House Martin to my list at another random stop, getting out of the car and hearing the characteristic farty noises from the sky above. This tactic of frequent stops really paid dividends about 7.5km after Route 14 becomes Route 8. At another passing place I stopped at briefly, this time more to admire the view in the late afternoon sunshine, I became aware of leaf litter noises from the other side of the road. I had not yet got out of the car, and turning around in my seat I saw three Pheasants feeding on the verge. A male and two females, surely Swi…..wait a minute! I grabbed a record shot quickly and then consulted the field guide. They were Mikado Pheasants! I took a few more shots before the birds disappeared up the slope and from view. All my tyre woes were forgotten in that instant. Had I not hit that rock, had I not spent that time getting to Puli and back, would I have stopped at this point at this time of day? Richard Foster had said that Mikado Pheasant was a possibility on the other side of the pass, but had said early and I had assumed I had no chance. Yet here I was having clawed back probably the biggest tick, one of the hardest birds on Taiwan, the one that all the tours have to build in back-up stops for. I was cock-a-hoop!

I had dinner at Tianxiang and browsed eBird for a while to see where the best spot for Morrison’s Fulvetta (Grey-cheeked), one of my remaining targets in the area, was. Luoshao apparently, so that is where I drove and slept.