The joy of shoes

Am I alone in appreciating a nice shoe? Most people seem to buy a cheap pair of shoes which then fall apart after a year, forcing them to buy another pair. Nick C from my local Wanstead patch is the classic example of this. Every time I see him on the patch he has a new pair of shoes on because the pair I saw him in last time have mysteriously developed a hole and are letting in water, and that isn’t a reflection of how frequently I go birding locally. I take the opposite approach – a higher initial outlay but then years of mostly trouble-free use. For instance I had a pair of brown brogues that I bought in 1997 and that I only threw away last year – 21 years of service, albeit that during the final few years they had been relegated to gardening shoes. They were refurbished only once during that time, and came back almost as good as new. It was a sad day when they finally reached the end of their long, long life. Happily I have managed to replace them with a pair of scotch grain derbys on dainite soles which look equally sturdy, I’ll let you know in 2040 how they’re looking.

I actually have another pair of brogues that were bought at around the same time, either 1998 or 1999, but these were never worn as much as the first pair as they were very slightly on the tight side. I had these repaired about five years ago, just before the first pair became the gardening shoes – how about that for advance planning?! They too came back after a 10 week holiday looking equally sparkly, and I happily started wearing them as my everyday go-to shoe. So much so that they are now beginning to show their age and I found myself in that grey area between a further repair or whether to buy a second-hand pair in better condition – a pair of brown brogues is of course an absolute must for the fashion-conscious man-about-town . I chose to source different ones purely on the basis that the fit was not quite perfect, and I’m pleased to say that I have now found a lovely pair on Ebay that should last for ages and ages.

Wait, you wear second hand shoes? Shoes worn by another person? Absolutely, no qualms whatsoever. A pair of decent shoes cost £400 new and that is obscene really in this day and age. If you hunt around a bit you can pick up a pair with only a small amount of wear for a third of that, often even less - the last pair I bought cost a mere £50 and needed no remedial work whatsoever. A bit of basic hygiene and off you go. If you are so inclined you can also send them back to the factory where they were made and have them come back almost as new and still end up ahead. I’ve now bought four pairs of pre-owned shoes and been extremely happy with three of them; being fickle I sold the fourth. Style is everything, not for nothing am I known as a fashionista. 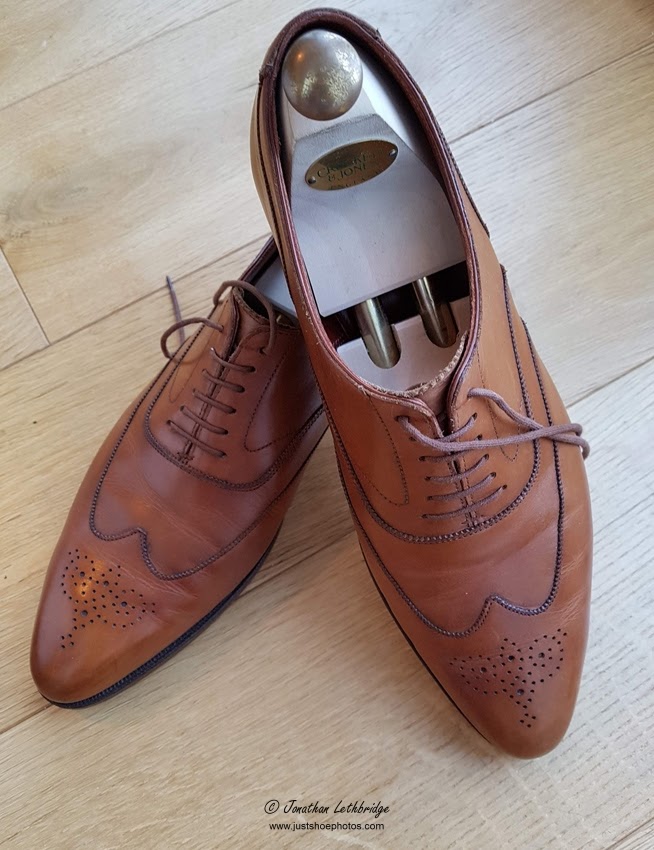 I suppose you are wondering at this stage whether I have a shoe fetish? Well, a bit. How many pairs of shoes do I have? Not as many as Mrs L is the only answer I am prepared to give. OK, if you only count proper shoes, and not wellies, flip-flops etc, it is well under ten. Ten?!! Ten!!!!!! Well, I have two pairs of shoes for work which I rotate, both black oxfords but in different styles. One pair is actually the ones I got married in, which makes them close to 18 years old – they are still going strong, just as we are! Then I have 3 pairs of more utilitarian brown shoes in different styles, one of which is going to find a new home shortly, and then an essential pair of tan brogues. So that’s six pairs. Walking boots seven, a pair of running shoes eight (immaculate condition!), and then two pairs of western boots. Western boots? Oh yes….. They are very special…. No, no photos of me wearing them exist I’m afraid.

You cannot however buy yourself a decent pair of shoes and then expect to have them last several decades just because they are well made. Maintenance is key, and good shoes  need looking after on a regular basis. Those brown brogues I mentioned were purchased during my feckless years, and I still feel a twinge of regret that they might have gone on for far longer had I looked after them properly in their early days. These days I brush, clean and polish on a mildly obsessive basis. All the shoes have trees, and I rotate what I wear so that the shoes get a rest. When I put them on I use a shoe horn to protect the heel, and if I go out in bad weather, the first thing that will happen when I get home is that the shoes get a brush down, then the trees go in, and then they are left to dry for a couple of days before I give them a clean. And it goes without saying that the more you look after them, the easier it becomes to keep them in tip top shape. I've got a selection of brushes, cloths, creams and waxes that I keep in an old wooden box, and there is something actually quite pleasurable about sitting down of an evening and getting my shoes looking really nice.

I hope you have all enjoyed this mega-boring post. 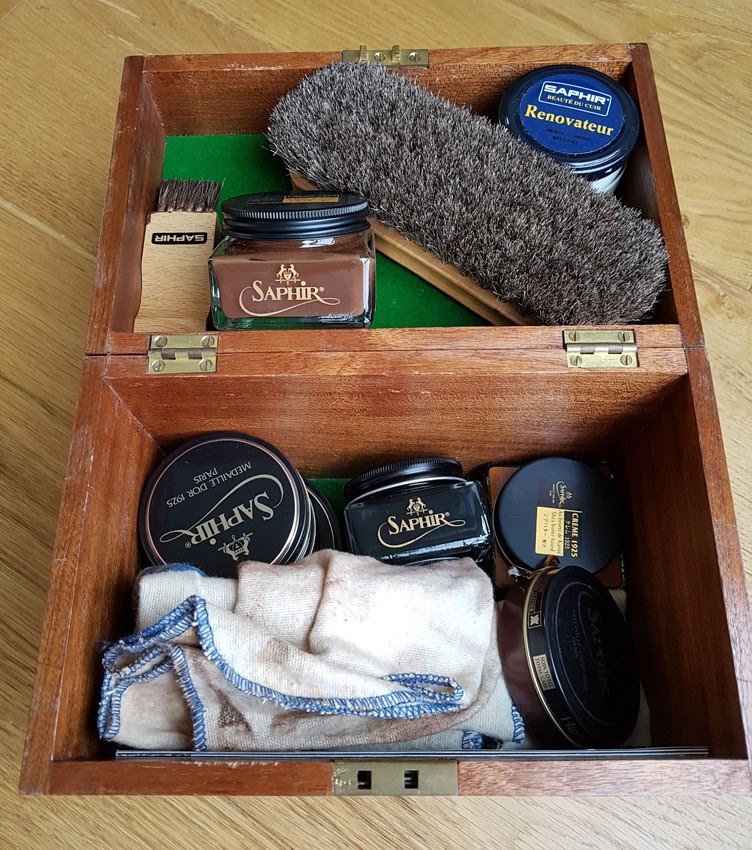