Henry and I left Page in blizzard conditions and headed east. It was actually quite worrying – we had a large American SUV, but these are 4x4 in name only, they’re not Land Rovers. The first half hour was seat of your pants stuff, desperately hanging on to the wheel to try and stay in the tracks of those who had gone before – either side was deep snow. We had the occasional scary wobble causing the back end to slide out, but I recovered each time and gradually it thinned out as we left the plateau and headed down to the AZ-98.

Our first view of anything resembling Monument Valley was, err, monumental. There is no other way to describe it. We turned off the main road towards Mexican Hat, and after a few miles the landscape opened out and…. wow. A butte of the sort that I had thought only existed in cartoons or westerns. But this was only the start. We passed what is known as El Capitan butte on the right, and in the distance we saw the spires and fingers of legend. And, for the first time, blue skies… the diet of snow and blizzards seemed behind us.

I cannot even begin to describe how awesome the landscape was. We crested a small hill and there it was laid out in front of us. The east and west Mittens and the Merrick Butte. It is almost impossible to do these justice in photographs. The rocks are all sandstone, and it is the process of erosion over millennia which creates the amazing pillars. The least eroded, like a kind of plateau is called a mesa. The next step, where the edges of plateau collapse leaving a central structure, is called a butte. The final stage is called a spire, where all that remains is a slender column. This is what is on each side of the east and west Mittens, causing them to resemble hands, hence the name. I suppose the spires finally collapse and that is then that, and that one day it will look very different. I expect that this is not measurable in human lifespans so you needn’t worry about going right away.

Our first stop was the view made famous by Forrest Gump, the road looking south towards Monument Valley. It is nothing short of magnificent, any thoughts of twee and tired were immediately dismissed.  I was amazed that so few people were here, surely this was a prime spot for tour buses galore. To be fair there was a lot of space for parking, and a steady stream of passers-by stopped, ran into the middle of the road for that all-important selfie, and then headed off again. We didn’t bother with the selfie part, that’s not my style at all. What is my style of course is small black panthers… 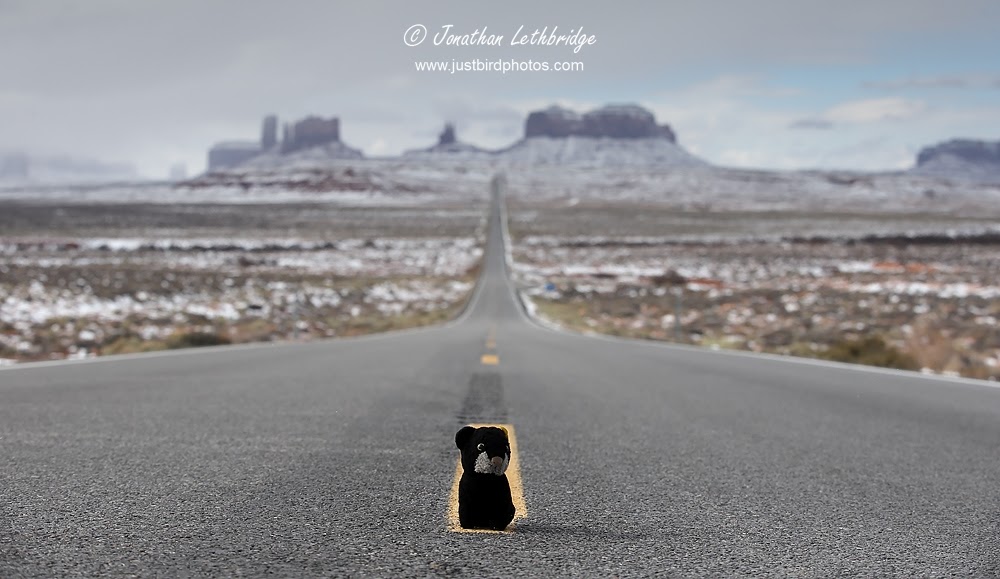 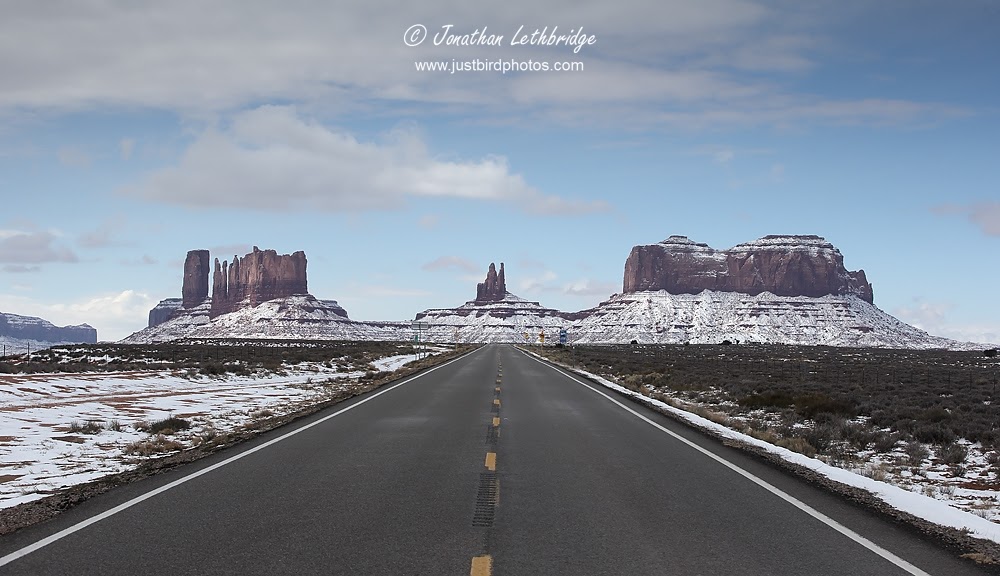 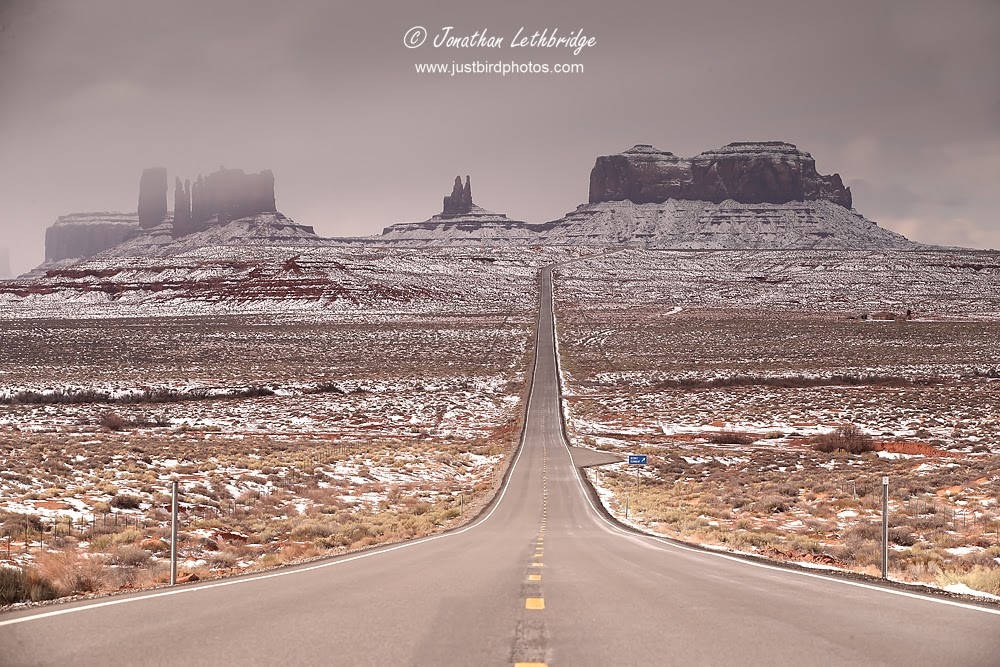 Once again the weather was doing its best to confound us, and it didn’t look like there would be any kind of decent sunset. Then again, with a landscape like this there is perhaps no need for photos. We finished up the day on the dirt road known as Valley Loop, hoping to get the last glorious rays illuminating the Mittens. 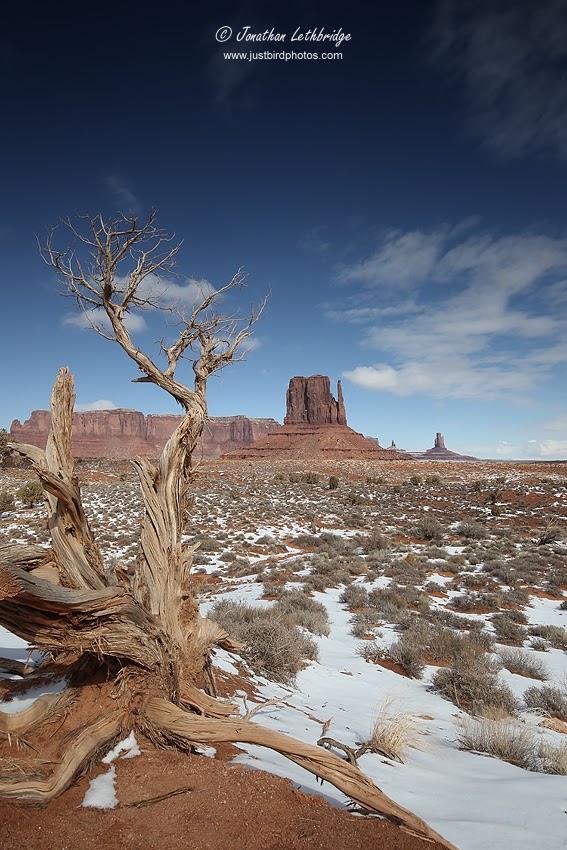 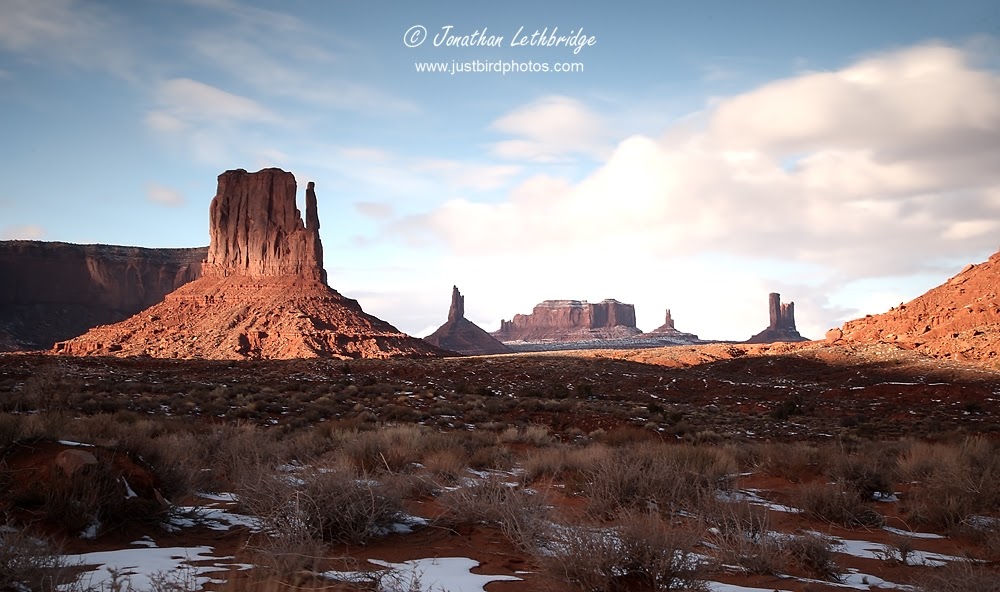 We were staying at the very conveniently located “View” hotel – options are extremely limited in the area and thus all are expensive. Every room has an amazing view. This also meant we could simply walk out of the hotel the following morning to take in the stunning sunrise. Once again the alarm was set and we woke up far earlier than either of us really wanted. You will be surprised to hear that instead of a clear glowing sky that instead it was snowing. Excellent, just what we wanted! The desert had turned white, which was a pretty unusual look. The forecast did have it clearing though, so we decided to go and look at the Forrest Gump view again and wait for some blue sky. Gradually this appeared and we gained a bit of clarity. And by the time we got back to Monument Valley to drive the loop it was the pure blue sky we had been dreaming of. The views from various spots were spectacular, inhospitable, but beautiful, and it was possibly my favourite place we visited on this trip. 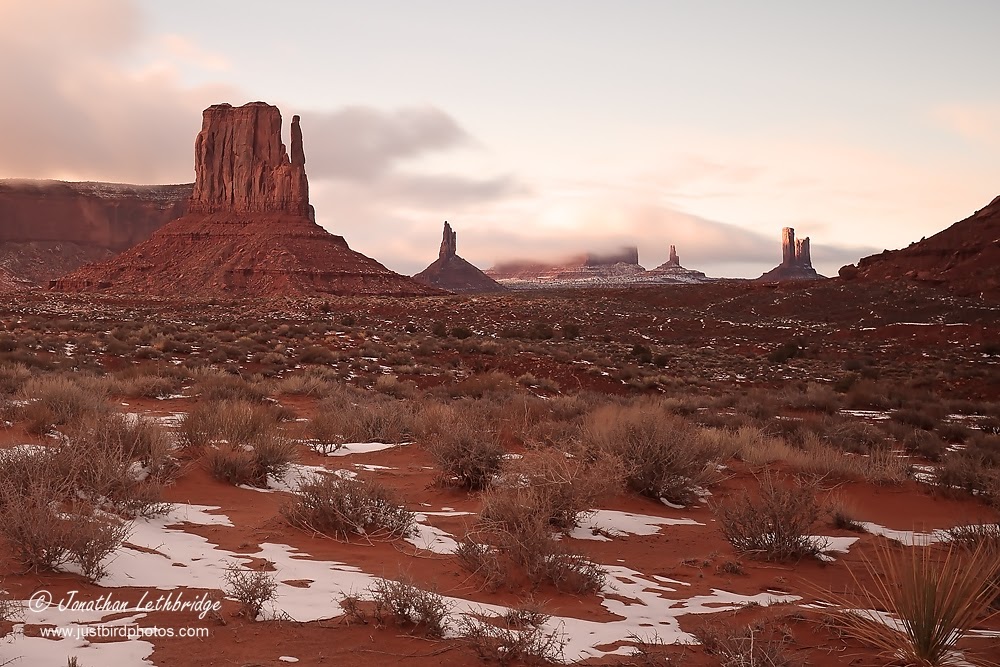 Posted by Jonathan Lethbridge at 15:18