The “of Happiness” concept

It is entirely possible that this post is a repeat of one that I have made before. If that is the case you will have to forgive me, but the concept of a Something of Happiness has been pretty central to my life since about late 1996, which is now nigh on 20 years. In fact it could easily be right about today’s date that the phrase first entered my consciousness. And it has spread further than just me – people who never met my mate James from whom it originates use it too. The Log of Happiness on Wanstead Flats for instance (well, multiple logs actually) so favoured by passage Wheatears is one example of its usage but there are many others, springing up in parlance all over the place. All thanks to James. 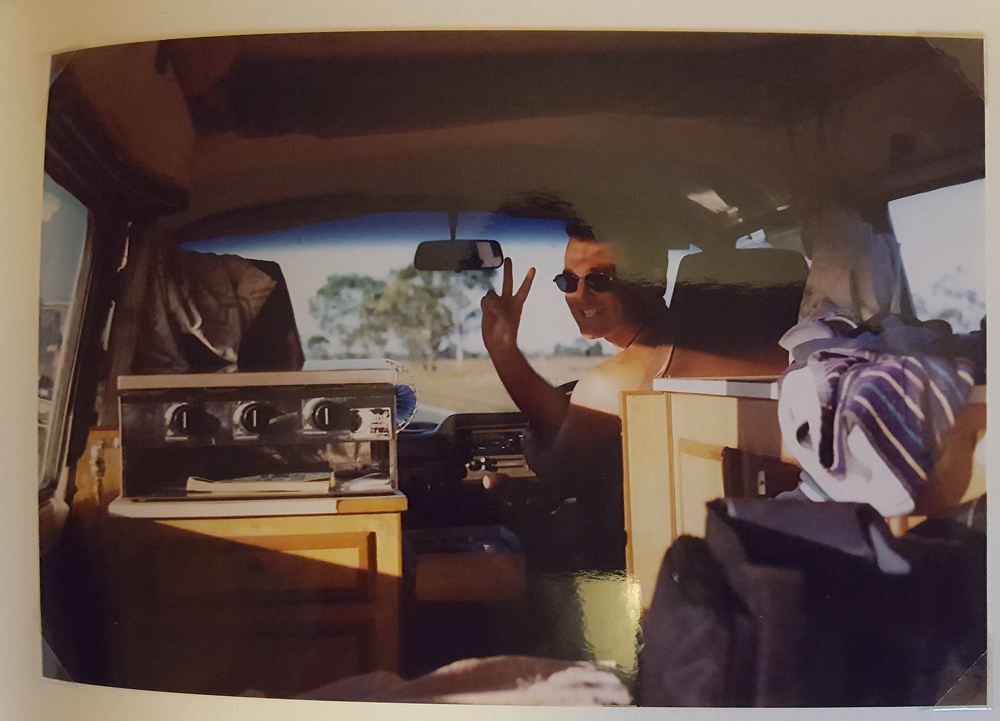 He was a pretty happy-go-lucky person. Unconventional, not designed for the straight-jacket of conformance that modern life forces upon most of us. Things were pretty easily categorized – for the most part either he liked them or he didn’t. He had little time for the latter and that drove how he lived his life. He did what he enjoyed, he actively avoided what he didn’t. As a result he never settled down in any one place, but neither was he transient. When he needed to he knuckled down to it and worked his ass off. When he didn’t need to, he had no compunction about chucking it all in and telling whoever it was he was working for to go and get stuffed. When I planned a two month stay in Australia before starting work in the bank I still walk into every day, he scrimped and saved to buy a camper van and joyously quit work the day before I arrived. If there was something fun in the offing, he wanted to be a part of it.

The first time I came into contact with the concept of the Something of Happiness was in France. James came to stay with me for a few days in my student flat in Montpellier. He threw himself enthusiastically into our lives and the few days turned into several months. In fact he stayed with me until I came home again a few months later, we took the same bus. He was a little older than me, perhaps 8 years, but just like me remained extremely childish, but was also almost entirely without my risk adversity. He just did stuff and worried about what might go wrong later. Those months were among the happiest and funniest of my life, and he made a lasting impression not just on me but on a number of my fellow foreign students. A permanent smile and an insanely gregarious personality meant he was a hit with most people he met. Beaches, mountains, bars and parties, he was a force of nature. Good things were good, bad things were bad. A beach was a Sandy Place of Happiness. A telephone bill replete with expensive calls back to the UK was Shitty Paperwork of Unhappiness. He didn’t like bills, bills were unfair, as were many things to do with corporate life. Banks for example, but he did not begrudge the fact that I was about to join one. 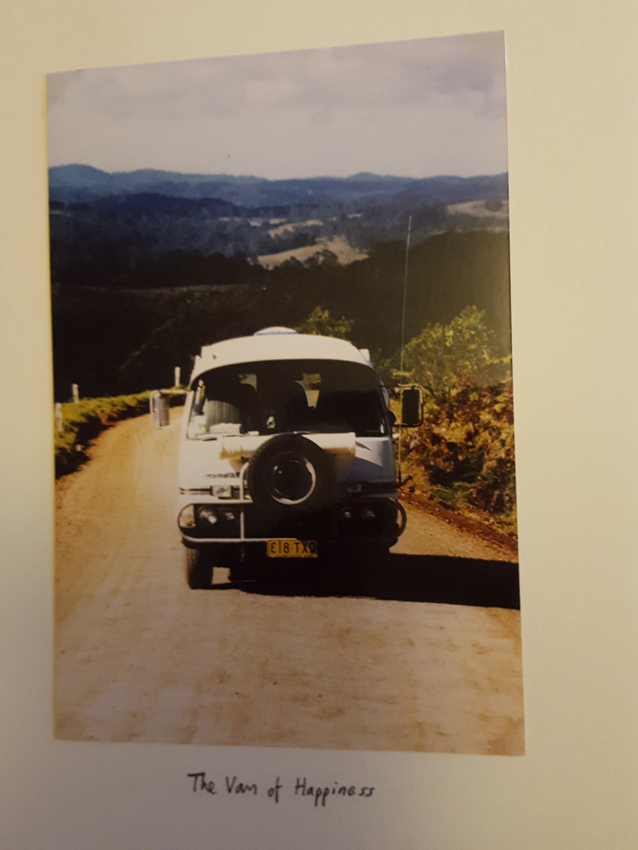 It was the Van of Happiness that really cemented the phrase. He and I lived in this decrepit van for two whole months, a van older than me and which had a top speed that barely exceeded my age. The Van of Happiness contained a Dirty Clothes Basket of Unhappiness, and ultimately a [cracked] Head-gasket of Unhappiness, but for two months it was our home and the centre of many wonderful adventures as we drove it from Sydney to Cairns and back. The Great Dividing Range west of Cairns did for us, our grand plans to get to Alice Springs shattered as the van lost all speed going up the hills and eventually overheated and ground to a stop. We could not afford to get it fixed, but some chemiweld (Goo of Happiness) provided for free by a local taxi repair garage that he charmed ensured we made it back to Coff’s Harbour in New South Wales provided we only drove during the cool of the night. This introduced a whole new dynamic to our trip, arriving in the early morning at fabulous locations and chilling out in during the day, sometimes for several days, before departing under cover of darkness to new places to have fun, climb mountains and find wildlife. The spirit of the van lives on in some of the birding trips I make today. When I travel with Bradders there is a Purple Folder of Happiness which contains all our travel documents, maps, and bird gen. And all trips generally conclude with a Spreadsheet of Unhappiness which works out who owes who for petrol and other expenses. Mrs L uses it for various things, so do my kids, and so do a number people I work with. It just catches on. 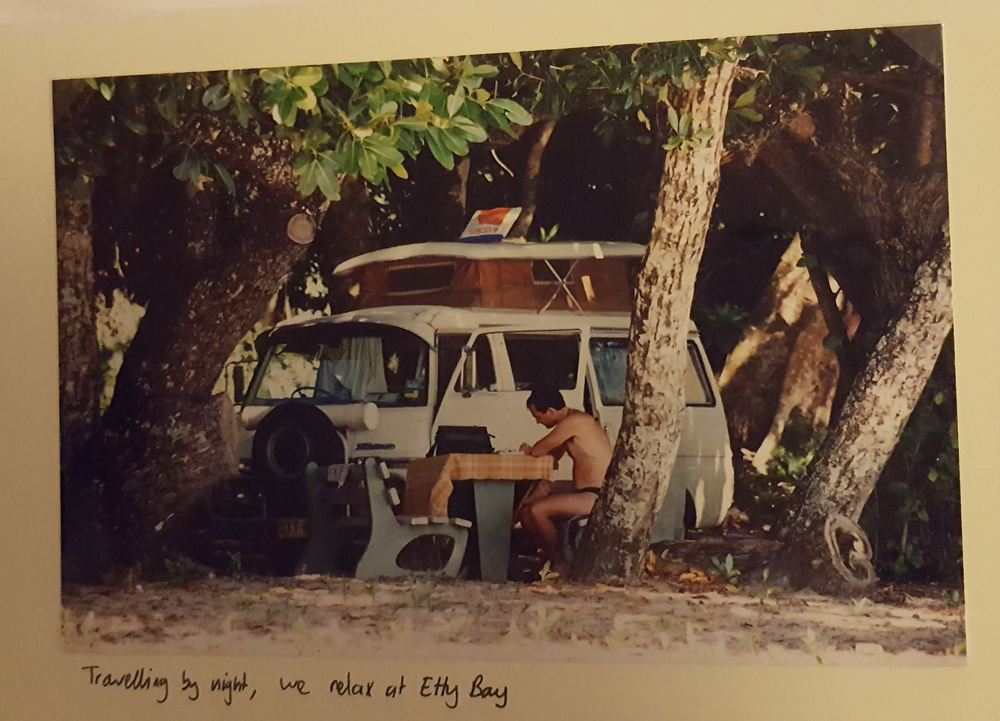 Whilst few of the people who use the phrase other than me have ever met James, and indeed never will as he died in 2009 in the Victorian bush fires (wrong place wrong time, and sadly also an element of not quite thinking things through), but some twenty years later I think he would be pleased to know that it lives on in numerous people and is used daily to express either pleasure or moderate displeasure. But never seriously, as most things were never so bad that they were a problem, and he just navigated his way around whatever it was in the pursuit of regaining happiness. Sometimes that was quick, sometimes it took a little longer, but he mostly always got there. And so too do I. Life throws up these road-bumps, if you’ve never had to deal with one then you’re most definitely an outlier but rarely is anything insurmountable. That was how he lived his life, aiming at happiness, attempting to avoid unhappiness. Doing what he wanted to do, avoiding what he didn’t want to do or had no time for. It’s a simple philosophy, and I wish I could apply it as effectively as he did. So the next time something irritates you, just call it the X of Unhappiness and it will cease to be as big a problem. Equally if there's something that makes you smile call it the Whatever of Happiness. It'll stick, and you'll smile more. Guaranteed.
Posted by Jonathan Lethbridge at 22:47