If you had asked me a few years ago whether it was sensible to go to Hawai’i for a weekend I would have said you were insane. I wouldn’t say that now. I wouldn’t say it was entirely sensible either, but I would tell you that it was perfectly achievable and that you would likely have as great a time as I did. And boy did I have a good time. In two days I saw a number of endemic Honeycreepers, cleaned up on all the endemic water birds, and unusually did some heavy duty relaxing.

Logistics
Day 1: Dublin to London to Washington, visiting family.
Day 2: Washington to Los Angeles, several hours of bird photography on the beach and birding a wetland area, and then on to Kauai arriving in the early evening.
Day 3: Waimea Canyon, Kok’ee State Park and the Pihea and Alakai Swamp Trails. Late afternoon at Barking Sands and Polehale State Park to watch the sun set and swim in the Pacific. Evening drinking beer and star-gazing on the beach at Waimea.
Day 4: Hanalei Wetlands, Kilauea Point, Wailua and Keahua Arboretum. Evening flight to Honolulu and red-eye to Los Angeles.
Day 5: LA to JFK to London, travelling all day whilst losing 11 hours.

Days 1 and 2 I am not planning to cover as they do not involve Hawaii, likewise day 5 which only involved sleeping on airplanes and was rather dull. Days 3 and 4 were where it was at.


Day 3: I woke up early very much looking forward to the day ahead. My accommodation was two blocks from the start of Waimea Canyon Drive, and that was my first left turn of the morning. I drove up to the first lookout, passing numerous Erckel's Francolin and a single Black Francolin, and had my first proper view of the spectacular landscape, complete with Red Junglefowl, which as you get higher up become somewhat purer. Allegedly. Breakfast of fruit with a view to die for, including sweet candy bananas, a local variety that I swear I could eat basically for ever. I saw my first Red-crested Cardinals here, a south American import from the 1930s. Eventually I made it to the end of the road, now at 5200 ft altitude, and the small carpark. Japanese White-eye were easy here as they are almost everywhere but I also found my first Honeycreeper, the red Apapane.


I had come here because this is where the Pihea Trail leaves from, tracking east along the ridge. Although at this point it is quite wide, it soon narrows and become in places very steep. Unfortunately what had been a clear morning soon deteriorated. Nice views down the leeward side of the island, including the white specks of White-tailed Tropicbirds floating around hundreds of feet below me soon closed up as the cloud swept in from the other side. Gamely I carried on to the Alakai Swamp Trail, a wooden boardwalk and steps leading down to the river and on to the plateau, but I just got wetter and wetter. Didn’t stop me from getting exceptional views of the Kauai Elapaio and Japanese Leaf Warbler, and better views of an Apapane. Briefer views of an Anianiau, but I didn’t push on as I wasn’t sure what the heavy rain would do to the river – whilst crossable at this stage might it have become wider and more dangerous later on? I decided not to risk it and picked my way back to the car. What was great about this hike was that I had this endemic forest entirely to myself, and so I went very slowly indeed, examining the plants, flowers and mosses, following up on every sound and call. No I’wii unfortunately, I am sure they are there but they will need to wait for another day and another trip.


As I got closer to the start of the trail the weather began to improve again, somewhat annoying but it had been a hard slog and looking back at what seemed to be a wall of cloud suggested I had probably done the right thing. I am certainly not as hardy as I once was, and I fell over on the trail and hurt my knee to boot. Nevermind, I was on holiday and birds are not everything – I felt I had done well to see at least some birds. Pleased to see the car I had another banana, and got changed out of my extremely muddy gear and back into shorts and flip-flops. To mark this the sun came out, so I put the top down on the car and drove back the campground at the lower elevations. This is a place to get point blank shots of Zebra Doves and Red Junglefowl so I spent a bit of time messing about here.


By now 1pm, Kok’ee State Park was pretty busy and did not provide the solitude I was after. Back on the coast I did a bit of shopping for the evening which I dropped into my bungalow at the Waimea Plantation Cottahes, and then drove west pretty much as far as I could go. I passed the Kawai'ele Waterbird Sanctuary but it was pretty naff - my first views of Hawaiian Stilt but not a very prepossessing place, so I carried on to Barking Sands Beach, stopping anywhere I saw something of interest. Once at the beach I set up my scope and pointed it out to sea - an astonishing number of Shearwaters and other seabirds. Mostly they were Wedge-tailed Shearwaters, but smaller birds were Bulwer's Petrels - and what looked like Manxies were Newell's Shearwaters. All very distant, but with my feet in the warm sand, a far cry from what I would normally associate with sea-watching. A few Brown Boobies were fishing offshore, and a Wandering Tattler scoured the surf. I stayed here for the rest of the day until the sun set, alternating birding with swimming in the warm water and powerful waves. A pretty damn amazing spot and a good end to a fun day. Back at the cottages I discovered that there were gas barbeques you could use, so I cooked up my dinner on one of these, and then lay in a hammock and indulged in a spot of star-gazing and beer-drinking. The sky in Hawaii is incredible, presumably one of the reasons they build observatories here - coming from London where we barely see a star made it even more impressive.

Day 4: A slower start today, my last day on Kauai! I was up with the sunrise and exploring the hotel grounds, something I had not had time to do the day before. Very birdy indeed, and a somewhat eclectic mix of birds from around the world, all brought to Hawaii over the years and established. Pacific Golden Plover mixed with Junglefowl and Cattle Egret on the lawns. Passerines were represented by Saffron Finch, Common Myna, Chestnut Munia, Red-crested Cardinal, and my favourite White-rumped Shama. I had a leisurely stroll, took a few pictures, returning now and again to my cottage for a refill of coffee. With the sun well up I checked out and headed east - I'd be doing this for most of the next 36 hours!

I passed a Pueo on wires just outside Waimea, and a quick U-turn on the main road allowed me to park up next to it. This is of course a Short-eared Owl, but is the endemic sandwichensis sub-species, and I was pleased to find one. Next stop Salt Pond Park outside Hanapepe, but this was quite disappointing really, very dry. Ended up driving the whole of road around to Hanalei which had been the main plan. This takes a lot longer than you might think. The distances are small, but there is a lot of traffic, and large sections of the road have very low speed limits. So it was mid morning by the time I stopped at the Hanalei Valley Lookout and started scoping the reserve far below. In fantastic light looking through the scope was a pleasure, and I soon picked out the Koloa, the native Hawaiian Duck, along with numerous endemic Hawaiian Coots and Moorhens. A single pair of Nene were a decent find and the only ones I saw all weekend. Lots of Stilts were in various flooded fields, and a single Black-crowned Night Heron. After I was certain there was nothing more to find, I descended into the Hanalei Wetlands at ground level. From this perspective I didn't see a single duck, but got lots of good looks at the native Coot which is almost identical to the European one. Joy.

Next stop the famous Kilauea Lighthouse, which as bad luck would have it was closed on Sundays and Mondays, i.e. my entire visit. There went my Tropicbird photo plans..... Instead I watched from the small car park outside the entrance, fabulous views of Red-tailed Tropicbirds, with the occasional White-tailed in amongst them. Also here were Red-footed and Brown Boobies, and piratical Great Frigatebirds drifted by although I did not see any attacks. This was a nice way to spend a couple of hours before heading back round to the coast to find some lunch - fish Tacos from a roadside stall in Kapaa and then a restful loll on the beach at Lydgate State Park. Managed a bit of shopping here as well, plenty of places selling silly shirts and other tourist gear.

When thoroughly relaxed I drive the 580 to Opoeka'a Falls where I got good views of White-tailed Tropicbirds in the canyon, and Japanese White-eye in the vegetation at the overlook. This road then led all the way to the Keahua Arboretum, where I had a bit of a wander, finding more White-rumped Shamas and a small flock of Nutmeg Mannikin. There were also some pretty cool trees here on the slope up behind the stream, which I had to wade through to get up to them - well worth it, best bark I've ever seen. 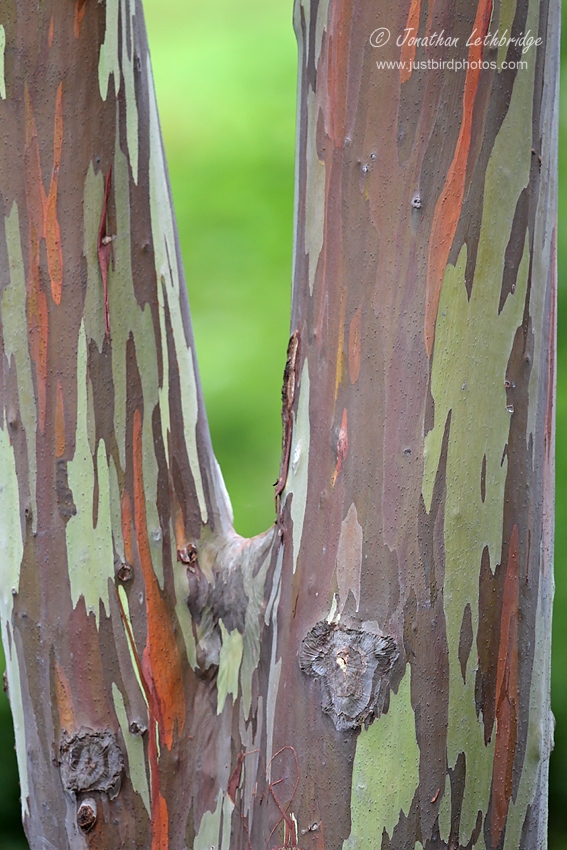 With the evening approaching my final birding was along the Huleia stream just south of the airport. Menehune Fishpond had nothing on it all, but there were loads of birds in the Huleia National Wildlife Refuge - nothing I hadn't seen already but a nice walk to finish off the trip. I returned to the airport, gave my lovely car back, and then took the short flight as the sun set to Honolulu on Oahu. The red-eye for Los Angeles left at 9.30pm....

Posted by Jonathan Lethbridge at 21:40