Another good morning on the patch – trying to make an effort now that we are in season so to speak. I think Nick was surprised to see me sauntering down centre path, two Whinchat to the good at 7.45am, but I’m sure he’ll get used to it. Unless it rains. It was quality again this morning, although seemingly with nothing new whatsoever. They were probably the same two Whinchats as at the weekend, and Nick and I notched up four or five Spotted Flycatchers around Long Wood, all of which were also around yesterday. Similarly, Jubilee Pond still has its resident Common Sandpiper – I’m pretty sure three days is unprecedented. It’s particularly interesting that it is sticking on this particular pond, probably the most disturbed and disgusting of all our ponds. Walking around it this morning I was able to take in the quite disgraceful amounts of crap that people insist on tossing into it, but still the birds come. I just don’t understand the mentality of people who do this. The last time I dropped any litter anywhere was probably around 1980 as a five year old mistake. Most of the litter around Jubilee is dropped by adults, indeed some of it is very adult. They should know better. And mostly the people who simply discard cans, bottles, bags, clothes, TVs and all the rest of it actually live nearby, and visit repeatedly. I don’t get how they can’t care what it looks or smells like. I can only assume that the inside of their houses looks similar and they’re just used to shit everywhere, so inside or out makes no difference. I appreciate that’s a very middle class comment, but poverty, social injustice or any of the other ills of the world don’t give you a free pass to throw your rubbish all over the floor. Or sit on runways. It’s a real shame, especially after all the effort that went into trying to spruce the area up. 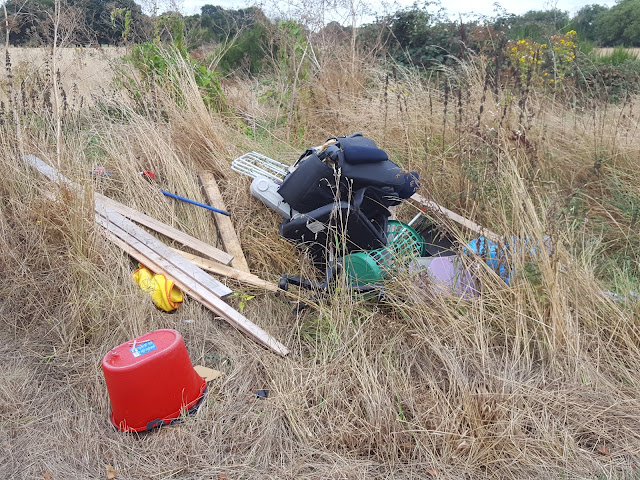 At the bus stop close by I seethed at the ignorance and stupidity that the patch often brings to the fore, and then realized that today there was a bus strike. As you can imagine this made me even happier, and I trudged off across fairground flats towards Centre Road and Forest Gate station in a foul mood. I passed a large rat in the ditch, another byproduct of local apathy, and on crossing the road found a guy pissing in the car park and a pile of junk including a chair and a TV. Honestly, I live in a fucking toilet. Or adjacent to one. Bypassing this latest offence I skirted the smashed up Skylark signs and headed down the path to Angel. As I did so a Pipit buzzed by overhead. Buzzed. In that nice, non-silent Tree Pipity kind of way. Zero to hero. I thought I probably had a Tree Pipit a week or so ago, but unless they call I frequently refuse to tick them as one or the other. Views would have to be really good, which often they’re not. A call however and even a flyover gets the nod. This lifted my mood temporarily, and I tweeted out the good news. I’m still cross about the state of the place however, it is so unnecessary and selfish.
I carried on past the pond and the ubiquitous beer cans and left the Flats. A short while before I’d seen a lady with six dogs also leaving the Flats. I’ve seen her before, like me a repeat visitor lucky enough to have this amazing place on the doorstep. Except of course that unlike me she couldn’t give a rat’s arse, as far as she’s concerned it’s just a massive sewer. Once again she was not carrying any little plastic bags, so that means that there are another six piles of dogshit somewhere out there. I say this not with absolute certainly, but nonetheless some measure of confidence. Few people use the Flats as a place to enjoy, it’s mostly a place just to conveniently dump stuff. I can imagine that picking up turds from six dogs must get a little tiring, certainly I wouldn’t enjoy it. But if you have a dog, or even more than one, that’s your responsibility and part of a owning a dog. Just as when you are replacing your telly it is your responsibility to get rid of the old one properly, rather than, say, driving to a secluded car park and tossing it out the boot.
In summary see title.

Posted by Jonathan Lethbridge at 19:35