This is going to be a very boring post, I strongly advise that you click away now to something else. Anything else. Even the Liberal Democrats homepage. It’s about plants. Bye now! Anyway, a couple of weeks ago I mentioned on here that I had had a disaster in my conservatory. Boring and middle class, yay! Like many that particular blog post sank without trace, but I had briefly mentioned that I had been almost reduced to tears (and my youngest daughter actually was!) when on returning from holiday we discovered that the conservatory had had no ventilation during an extremely warm spell, and had probably heated up to something like 50C for around five days. When we got home in the evening it was still 43C in there, a dry arid heat. The kind of conditions in which dogs die in cars, and it had dreadful consequences for the plants. Our conservatory is a haven. It has – well had, let’s get the tense tragically right here – a bougainvillea vine growing into the ceiling up a trellis, foliage plants giving bold splashes of green, hanging baskets with hoya, ruellia and tradescantia, cacti and agave dotted around, and my pride and joy, cycads from Australia, South Africa, Mexico, and India. We eat (ate…) surrounded by heady amounts of oxygen and prickles, leaves arching over our heads. If it’s warm enough we open vents, windows and doors, and are soothed by the gentle rustling of leaves. We do get stabbed from time to time, but generally we (well, I) feel that the benefits outweigh the occasional sharp pain.

I’ve been growing plants for a long time, one of several interests I have. Like all my hobbies, commitment ebbs and flows, it's a time thing, and so during times of ebb the plants do tend to suffer from neglect, but this is nothing compared to what just happened to them. This spring I had finally dragged myself out of the gardening doldrums and got everything sorted out. Things were going, and growing, gloriously. Plants that had not grown new leaves for a number of years were flushing, the bougainvillea was flowering. The place was looking more lush than ever before, the results of the increasing love and attention the plants were getting. Good husbandry in other words. I still had issues with mealy bugs, a common sap-sucking houseplant pest that even Kew Gardens has legions of, but overall I felt I was winning the battle.


Then we came back to total devastation, a wall of heat. All the soft leaved plants - the vines, the trailing plants, the foliage plants - had been decimated. Barely a living leaf, brown and shrivelled, white and skeletal. The cacti and agaves, desert plants that you would think would have easily tolerated the conditions, had had the moisture sucked out of them and become shadows of their former selves. But worst of all was the damage inflicted on the cycads. Glorious leaves that had once been silver, blue or green were a deep reddish brown. New flushes of leaves had been cruelly stopped in their tracks and withered away – to put this in context the plants frequently grow only one set of leaves per year, and sometime not that many! On the species that grow continually but one leaf at a time from a central whorl I had literally lost a decade of growth. What had looked like a lush green firework now looked like a dead stump. To say I was stunned was an understatement. I sat on the sofa numb, disbelieving of what had happened. Away for just a few days I’d undone months and in some cases years of care and attention.


The family gathered round, unpacking forgotten. There was no saving some plants as once desiccated leaves do not recover. The green garden waste bags came into the conservatory and I sadly pulled down metres of dead vines from the struts and supports, and was almost inconsolable as I chopped off the dead cycad leaves. Everything got a mild watering to try and reintroduce some moisture into the soil, but not too much as dried roots will rot in waterlogged conditions. When we were finished clearing up it looked post-apocalyptic, Armageddon. Our once green space was practically bare. There were some exceptions, a cycad from Mexico had sustained almost no damage whatsoever where neighbouring plants had been cut to the ground. Of two from South Africa, both the same species one had lost 100% of its leaves whereas the other had just the mildest of brown tips. Nonetheless these were the smallest of miracles in what was otherwise outright carnage. Depressing as hell. There are no photos, I couldn't take it. 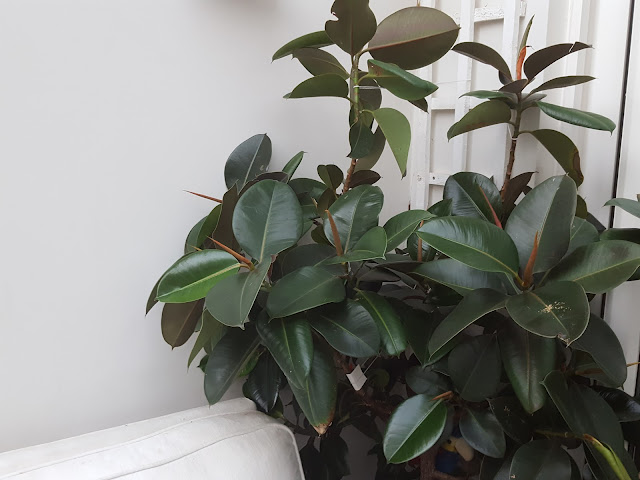 I have a greenhouse too, and the plants in there were not affected, including some that by good fortune I had moved down there to repot but not brought back, and so I was able to add some instant greenery in places but the vines and foliage plants had no subs ready to go. To get back to something not resembling a nuclear holocaust I’ve made a few select ebay purchases. A new rubber plant has been collected from Surrey, far larger than its unfortunate predecessor, and looks fantastic in one corner, like it has been there for years. It has reached the stage where it’s more like a small bush, rather than the single stems you find in garden centres, and is growing from multiple different points. I swear that it has grown by 10% in all directions since I brought it home, clearly it likes the new conditions. Agaves were easily replaced from an enthusiast in Essex and again look like they have been there forever, and where there was once a huge hoya I have now strung up a passiflora that is already four feet tall and spreading its tendrils all over the place. In time it could look amazing, especially if it flowers. Overall it is looking a lot better than a few weeks ago. The cycads are not so easily replaced though, and amongst the new green additions look like a succession of Del Monte cast-offs, pineapple husks in weathered pots. Nonetheless I was hopeful that their unique biology would have allowed them to survive. 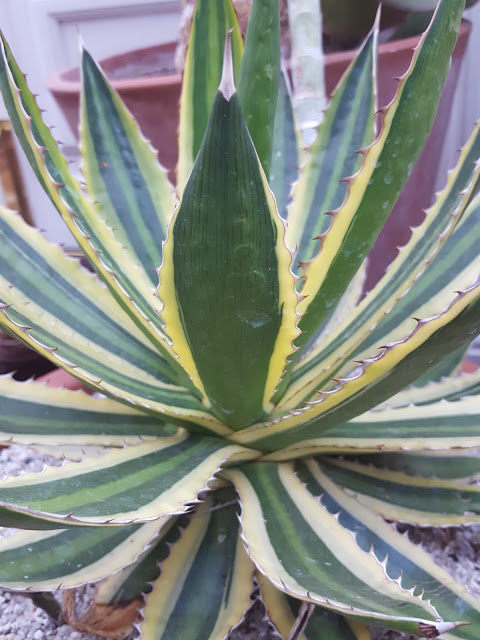 Cycads are funny old plants. They’re remnants, living fossils, descended from the oldest of plants and familiar to dinosaurs, like Ferns and Araucarias (like the Monkey Puzzle). For some reason plants from these families have always called to me, I should have been an Edwardian. They have small furry or smooth trunks, caudexes, formed from the bases of old leaves, and they grow incredibly slowly. Smaller plants in particular, which most of mine are as I’ve grown them from seed, tend to have significantly more more below ground than above, huge underground root systems far larger than the caudexes themselves, and this means that they can store a tremendous amount of energy in the form of starch. I was hopeful that this energy would be released after the heat stress, just as wildfires in habitat can trigger a mass flushing of new leaves.

Tim Farron never looked so good did he?


I was not wrong. A mere three weeks after the furnace they are springing to life, even the smallest and daintiest plants. In the days immediately after coming home I gradually introduced a bit more moisture, and then the following weekend I gave them a decent amount of a high nitrogen fertiliser. Slowly but surely the tops of the caudexes are expanding. Green tufts are beginning to show. On one Indian cycad they’re a foot long already. I will remain eternally grateful for the extra warmth that September has blessed us with, as ironically enough these plants need heat in order to grow. Had we hit an early autumn it could be that many of these plants may have just gone dormant, as it is I’d say that around half of them are actively growing, and it’s likely the other half will follow suit, although the sooner the better as the leaves become stretched in low light conditions (the professional term is etiolated). It may not look dark to you or I but these plants are from the tropics. 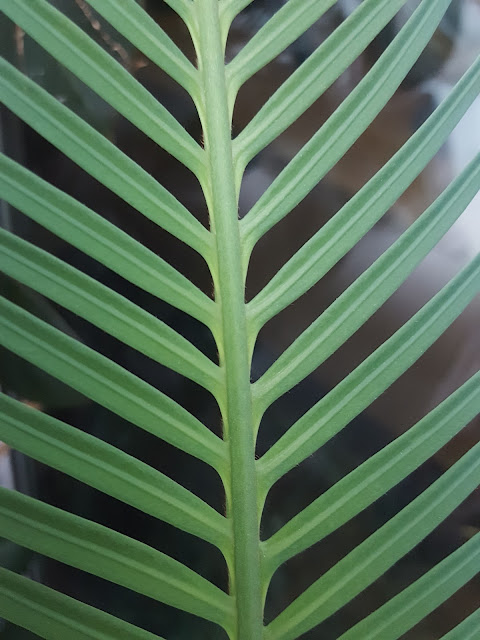 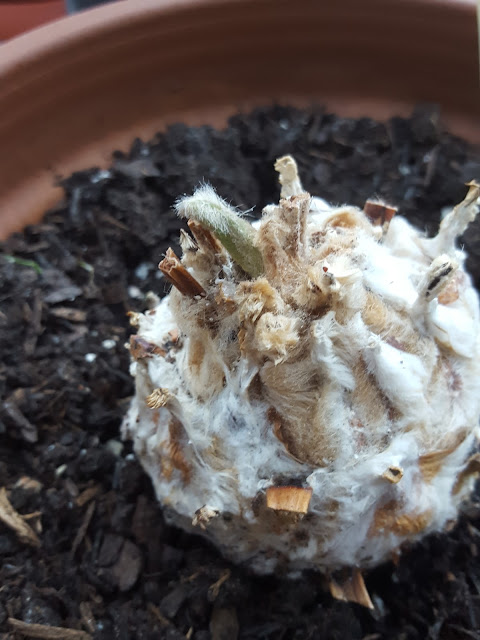 I suspect that in another four weeks things will look vastly better, and that a year from now we will barely remember what happened with the exception of one of two plants that will unfortunately look forlorn for much longer. There is a silver lining however, and that is that a week of oven-like conditions has proved pivotal in the fight against the bugs. Mealy bugs are soft and moist, with a waxy coating, and the unrelenting and extreme heat seems to have killed the vast majority of them off. A few lived on the leaves, and so departed when I cut them off. Many more however lived unseen in the cracks, crevisses and fur. When soft new leaves start to come out they’re like a magnet for these pests and in some cases, if I’m not sufficiently on the ball, can prevent a new leaf from growing before it has even got started. They breed like the clappers and severe infestations can completely engulf leaves, making them look like they’re covered in snow. Like aphids they secrete sticky goo, and this in turn grows mould on it and it all becomes disgusting. They’re easy enough to clean off leaves, but hiding in the cracks they escape detection and also insectides (though mostly I use a hose or the shower to blast them off). This time around however and the new leaves are untouched. Where previously I could have been guaranteed to spot small white bugs crawling up stems, now there are practically none. I can only surmise that where a decade of various treatments has failed, the unintended super-heating of the conservatory has fried them all. Who knew? Certainly not me, and whilst I would obviously have preferred that none of this had ever happened, if all the plants are back to normal in a year or two but I have no bugs to contend with, it may just have been worth it. Just.

Did you make it this far? If so I'm amazed!
Posted by Jonathan Lethbridge at 19:53