When news of the Fan-tailed Warbler in Kent came up on Sunday, my heart sank. After the excesses of Saturday and the dire state of the BP account, Sunday was supposed to be a family day, with no mad dashes. Fan-tailed Warbler is already a bird remembered for the wrong reasons. Back in September last year, news of one of these broke at Swalecliffe in Kent. Famille Lethbridge was already in the car en route to Rainham for a nice relaxed walk. Unreasonable Dad drove straight past Rainham and on into Kent. Still showing as we entered Swalecliffe, get in! I dumped the family in a really grotty pub, garish carpets, Sky TV on 50 inch screens, the lot. As I was about to head off to the bird, Muffin needed a wee. I took him, I could hardly not, gave him back to Mum once done, and off I went. As I approached the crowd, someone beckoned me over. "Have you seen it? Quick mate, it's still in view, flying high west. In the white cloud, going over the white cloud now, in the blue...." I strained to see the dot, and couldn't. I had missed it by about 30 seconds, or half a wee. I dragged myself back to the pub, to find that football was now blaring out of all the screens. Mrs L and the kids were trying to eat some deep-fried muck surrounded by people stood up watching the game. She was not amused, as they say. The drive back home after our lovely family day out took a VERY long time.

This Sunday therefore brought back somewhat traumatic memories of a day ruined. Given I had been out all Saturday and had promised the kids a barbeque, there was no way. Nope, stuff it. Rubbish bird anyway - small, brown, and boring. "I care not, you can't get them all", I said, and started making plans for a trip to Kent on Monday. In the event I went to Cambridgeshire instead, with the happy result you have already read. So today when the pager kicked into life before 8am with the news that the Fan-tailed Warbler was still at Pegwell Bay CP and showing well, it seemed like I would have to go after all. I admit I was scared. FTW is as close to a bogey bird as I have, and my most agonising dip to date. Despite my recent run of extreme luck, if any bird was going to end it, it was going to be this one.

Throughout the drive, "showing well" messages popped up with pleasing regularity. Was I really going to get this? We arrived at Pegwell Bay at 10:31. People with bins I passed were all smiling. One of them said "Not been seen for 20 minutes, but they've got it pinned down in a bush". I was hoping for nailed or glued, but pinned would do. Pudding & I joined the crowd and looked at the bush. Nothing. 30 seconds the last time, and now 20 minutes, gah!!! 11am, nothing. 11:30, still nothing. At 11:45 I texted Paul "The run could be over". At 11:52 I texted Monkey "No sign for 2 hours..." "Persevere mate" he replied, with a somewhat alternative spelling of persevere. There was no way, the bird was gone. Another three minutes passed...

At 11:55 the Fan-tailed Warber zoomed over the path about 3 metres from where I was standing, having come from somewhere low in the scrub to my left, a matter of feet from where birders had been standing all morning, dzipped, and disappeared into a bush on the other side of the path. "That was it!", a number of us collectively gasped. "Wasn't it?" We all agreed that it was indeed "it". A few seconds later, as if to allay our fears, it flew out of the bush, flew over an apple tree, hovered briefly over a rose-hip, and dived into cover once again. I had it in the bins for about 10 seconds all told, but that was enough. Fan-tailed Warbler ON THE LIST, and my biggest dip consigned to history. It was all too brief to get a photo, so instead I'm offering this up, to at least prove I was there. 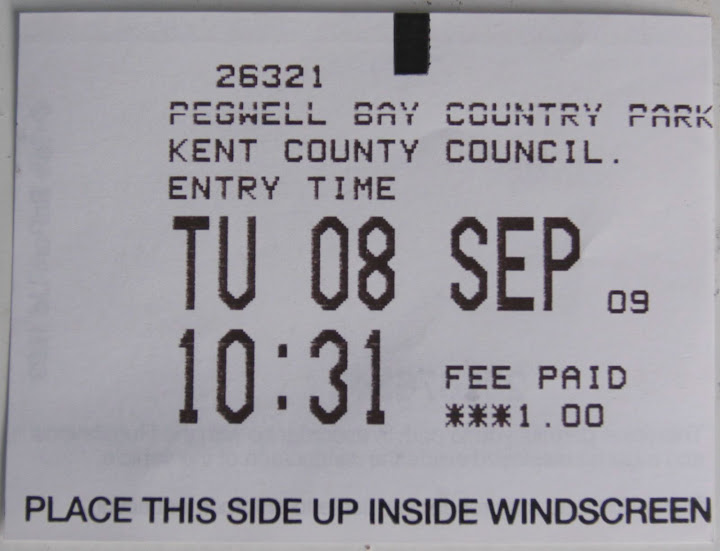 The machine made a kind of dzip-dzip-dzip noise as it printed this out.

I have now seen 9 lifers in 11 days, and if the truth be told I am knackered. The pace is getting ridiculous, and it all needs to slow down. I would not be disappointed if no rare birds were to be found tomorrow or indeed for the rest of the week. If this continues for much longer I am going to be a wreck by the time we all go to Scilly. Back to the patch tomorrow I think. Yes, that will be nice and calming. If there is an ideal tonic for a surfeit of rare birds, Wanstead is it.

Posted by Jonathan Lethbridge at 19:32