God it's cold. Do good gloves for birding actually exist?

At the last count I had five pairs of gloves. A recent pair, eXtremeties Mountain Guide Gloves, are 50% leather (at the front), 50% Goretex wind-stopper (at the back), and 100% useless. Another £30 down the drain. Even with some thin North Face ones on underneath, kind of like glove underwear, my fingers still go numb. If it isn't super cold, but still cold enough to wear gloves, they get all sweaty insde. Prior to these I had some North Face wind-stopper ones that were warmish, but had sponge-like properties undesireable in a glove. The latest attempt at finger happiness is a £5 desparation Ebay purchase of a Jack Pyke "thinsulate" fingerless glove/mitten combo thing. The mitten pull-over fastens back with velcro when you want finger exposure, and slips over when you don't need your fingers anymore. Sounds good, hell, I was sucked in, but they are in fact dreadful. What I didn't realise is that your thumb-tip is never covered. Also the patch of velcro is miniscule and getting all furry already, so the mitten bit will no doubt be flopping all over the place pretty soon. So here is a question, why can't somebody invent the perfect glove for birders that is light, unrestrictive, waterproof, warm even in cold weather but has wicking abilities in slighly less cold weather? Am I asking too much? Suggestions welcome (from my thousands of readers....).

Here are some photos taken with gloves. The eXtremeties ones. Without the under-gloves I can just about operate the camera. Any poor exposures should be blamed on the glove manufacturer, rather than the camera operator. 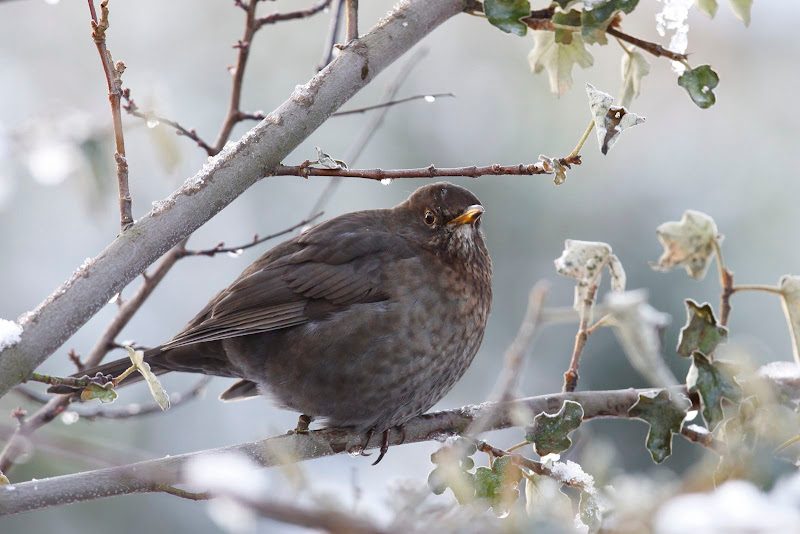 This blackbird was so desperate for food on Monday that it hopped in my footprints where I had disturbed the snow. Here it is on my fence. I attempted to go to work on Monday, but obviously London is so unbelievably crass and pathetic in the face of anything other than light drizzle that it was never going to happen. Instead I worked from home, hem hem, filled up the feeders, and spent 8 hours getting this frankly pretty dull photo. 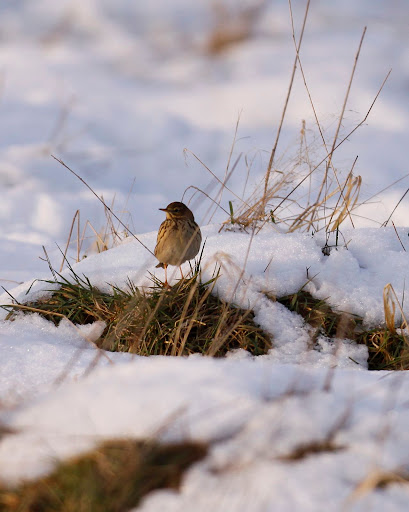 In the Park, seven Meadow Pipits were a-feeding. No partridges were located but it did feel pretty Christmassy. Skivers were out en-masse, somewhat of a carnival atmosphere actually, TfL be damned. 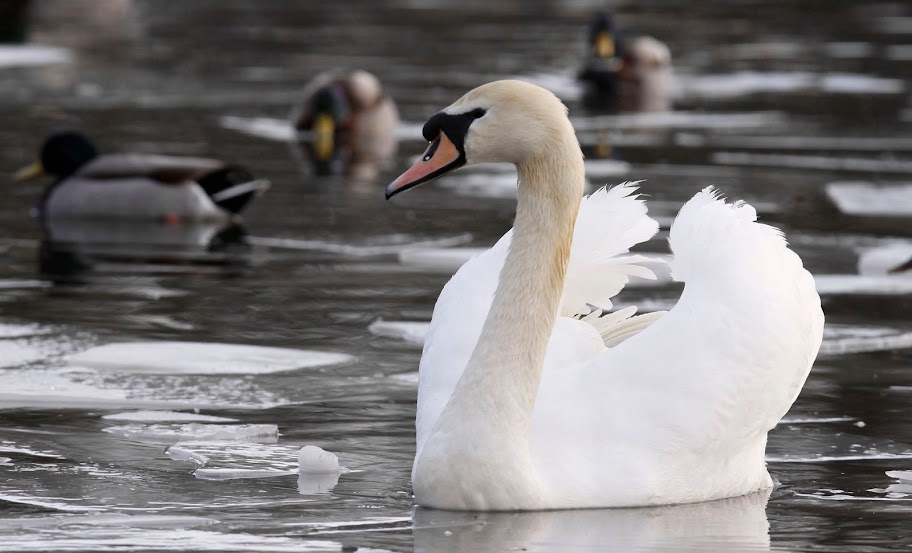 Alexandra Lake on Wanstead Flats was approximately 85% frozen. Bird photography is much easier when the subjects are confined to puddle-sized stretches of water very close to the shore. Even with gloves on. 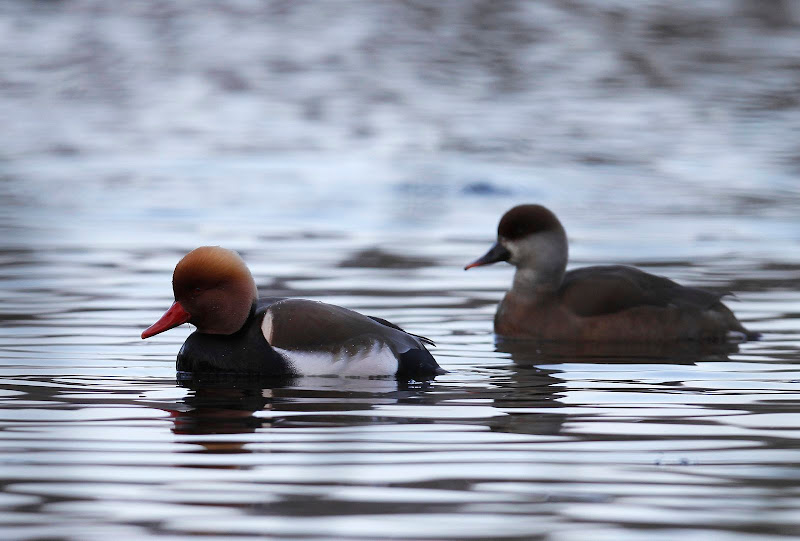 Amazingly, the pair of Red-crested Pochard that arrived on January the 9th are still here. Obviously still very wary, and only coming to Paella. 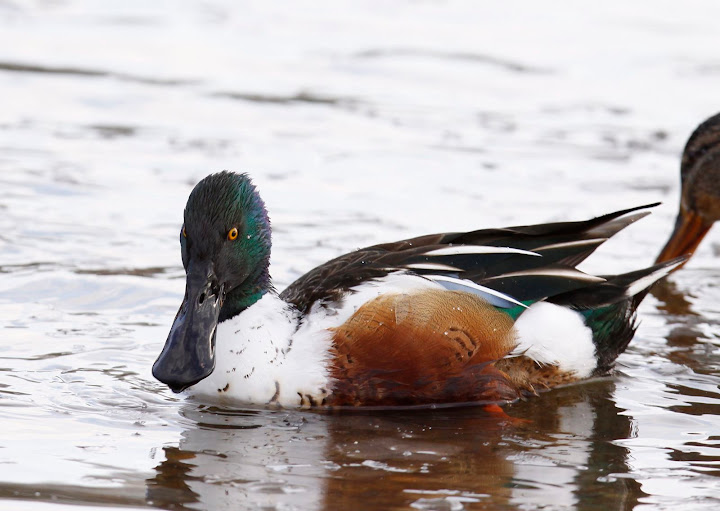 There should be more birds designed like this, they are superb. This one was feeding actively around the icy margins, and rarely had its beak out of the water. Probably saw the camera. 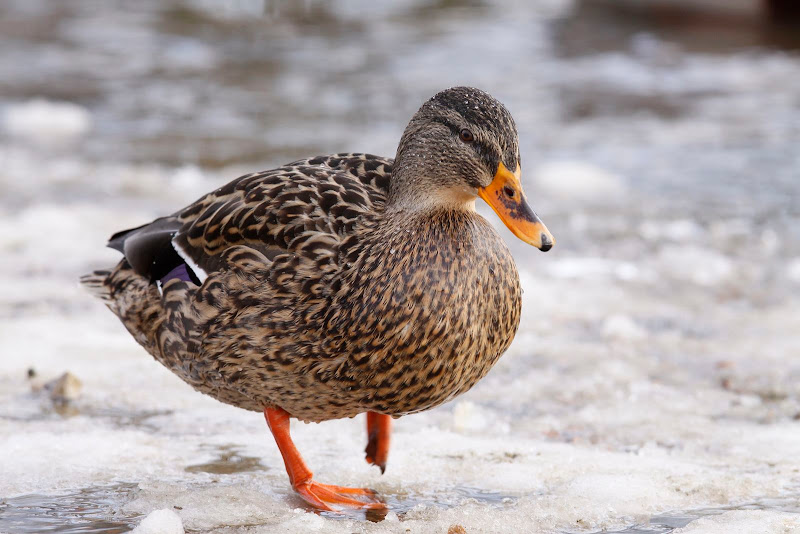 Although it appears someone has hacked this Mallard's foot off, in fact she was perfectly formed, and probably just a bit cold. I may have been imagining it but I think she was eyeing up my gloves, so I told her that they were crap. And far too big. D-uh!

Posted by Jonathan Lethbridge at 21:42