Having just waxed lyrical about the merits of local patchlisting, Jan 1st 2009 found me in Fife visiting the parentals. They are not impressed with birding as a hobby. Or any of my previous hobbies really. Maybe they would like me to be some kind of junkie drop-out rather than a sucessful career man cum provider of grandchildren? Niggle niggle niggle. It always happens, according to a strict formula (X=Y-(Y/Z)), where Y is the number of days you initially plan to stay, X is the days you actually stay as your parenting skills and all-consuming hobby are relentlessly criticized,and Z is the level & intensity of that criticism. X might also be the number of days you cut your intended stay short by, maths was never my strong point, but generally we always end up leaving before we had planned to. In this instance X = 12,.... or maybe 1. What I mean to say is X
But it was worth it for the birding. My temporary local patch for this jaunt, long in the planning phase, was the East Neuk of Fife, a succession of picturesque fishing villages on the northern side of the Firth of Forth. 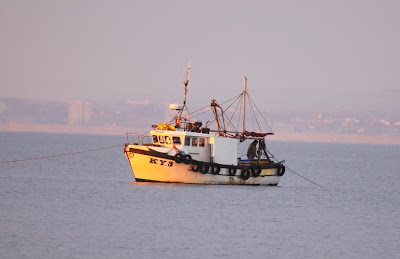 Largo boat. Note nicely judged horizon.
I won't bore you with all of the birds I saw, but the plan was to get as many as possible, obviously. Decided to start at Earlsferry where there was a King Eider. The little chap took over an hour to find, possibly because it was low tide and he was hanging about on rocks I couldn't see, or possibly because I was so exicted by the slate being wiped clean (2008, 284) that I started in the dark. I probably did get it early on actually, on profile, but conscientious birder that I am, I waited to see it properly. When it did eventually get light (around lunchtime I think) the bird was nowhere to be found, but after repeated scanning eventually picked him up, tick #21 for the day. Other highlights were Purple Sandpiper, Velvet Scoter & Long-tailed Duck, all scarce in Wanstead. 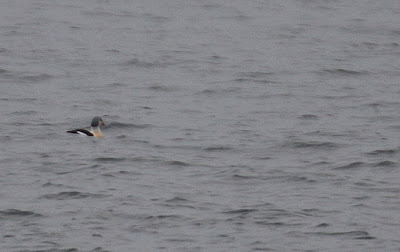 My 2nd King Eider. Many people have not seen one at all.

The sea was impossibly calm, I could not have hoped for better conditions (other than perhaps high tide) and there were stacks of divers and grebes at Ruddon's Point. The regular drake Surf Scoter got himself on the list as well. Tried to turn a flock of Linnets into Twite, and a Snipe into a Jack Snipe, but had to admit defeat. What is it with Twite? The habo was perfectemundo. I only ever see Linnet in excellent Twite habitat, pisses me off. Next up Anstruther for a fine juvvy Iceland Gull, totally unafraid of people. Just sat there posing. Managed a smug "oh I am such a serious and experienced birder" moment as well, doesn't happen often so best mention it. Got out of the car and a elderly-ish couple saw the bins and the serious "I am here, bird where are you!" look and asked if I was here for the Gull - note how the word Iceland is utterly superflous here - I confirmed that I was and that I expected it to be on the west harbour wall (where it had been when I saw it a few days earlier, but they don't know that, and think this is just innate birding knowledge, Iceland Gulls never EVER sit on the east side of a harbour) and that the west harbour wall was over there. Anyway, off I stomped whilst they lit up some of those horrible thin brown cigars things - you know the sort - there is something dreadfully unappealing about women lighting up those things, kind of makes you shudder. I digress. I went off, found the bird in about 2 seconds right at the end of the wall, about 2 feet away from where it has been all week, and stomped back. I meet this couple again at the start of the harbour wall, scanning all the gulls on the beach. Eagerly they ask if I have seen the gull. "Yes its that one on the harbour wall in line with the Bass Rock", and point at it, 50 yards away, and walk off. Bloody novices. I scoff at them as I drive off, as I was never like that. 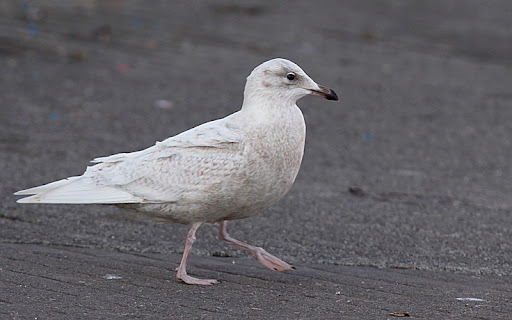 Iceland Gull doing a bit of a jig

Ticked off Dipper at a previously scouted site a few miles away, and then Red Grouse on the West Lomond, a recent discovery. Grouse, being really really stupid, fly into the air towards you if you imitate their call. Even a really crap "GOBACKBackbackbackbkbkbkbkbkbk" seems to do the trick. No wonder they are a favoured game bird. A lot of people were out walking though, so I had to wait a bit so as not to appear a weirdo. Managed it though, and then ran off down the hill for the next tick, scope bouncing over my shoulder and camera flapping against my thigh, and hat folded-up exposing my ears.

Sailed past a brilliant field full of Fieldfare and Redwing, luckily the tick-radar kicked in and I stopped and had a look. Both new species for Fife and neither had formed part of my Jan 1st plans. Result. Onwards to Loch Leven for PF Goose, Goosander and a guaranteed Coal Tit on the feeders, all of which obliged, and then wasted a precious hour of daylight driving to Hogganfield Loch in daylight for the Lesser Scaup, which had selfishly buggered off. At the approximate time I arrived in Glasgow a visiting London birder found a Little Bunting (lifer for me) at Ceres back in Fife, about 15 minutes away from my Dipper site. Why wasn't he on his London patch rather than gripping me off. And due to the equation mentioned above we were leaving tomorrow rather than staying an extra day. And can you guess if it was seen on Jan 2nd? Can you?!
Posted by Jonathan Lethbridge at 23:47