January 23rd, one year ago - A day of Infamy

Jan 23rd 2008 started out ordinarily enough. I had no child duties, so I spent some time in Bush Wood early doors, and had some simply brilliant views of a male Sparrowhawk sat up in the morning sunshine. Happy, and with the glow only early morning birding can bring, I put my bins in my bag and went to work. The day was no doubt fun-filled and enthralling.

On the way home I walked back through Bush Wood without a care in the world, and with dinner in my bag for me & Mrs L. What happened next is a bit of a blur, but in the passage between the wood and Belgrave Road, a bloke ran up behind me, pinned my arms behind my back and then a second guy punched me in the face and I was wrestled to the ground. A further two, in conjunction with the second guy, continued to punch my head shouting "What you got, what you got, where's your phone you pussy, where's your phone?", or something along those lines, until I indicated which pocket my phone was in. Somewhat amazingly, that was the only pocket they went through, so they missed out on an ipod filled with 60's classics, a blackberry, and my wallet. Losers. However, as an afterthought whilst making off, one took my bag, which had my treasured bins in it. I tried to pull it back - who was I kidding - cue another totally unnecessary punch in the face - and another one then took a huge running kick at my upper thigh, and then they all ran off into the wood. So 90 seconds and I was down 1 phone, 1 pair of 8x42 Ultravids, and 2 steaks - having said that, my appetite had diminished slightly. Scum - 100 yards from my front door, and on MY PATCH. I am still outraged a year later. The police came very quickly, but there was nothing to be done. My description of the assailants matched 95% of East London's youth, so nothing ever came of it, and I never got anything back. On the plus side, Leica had just introduced the HDs, so with the insurance payout I was able to get a replacement pair of the non HDs at a large discount and chose the 7x instead, which are phenomenally good.

This unfortunate encounter has had a number of repercussions beyond the passing physical ones.

1) For a while I was very jumpy. About 3 weeks later a jogger frightened the living daylights out of me on my own street just by running past me. I am never quite at ease whilst out birding solo now.
2) I don't bird Bush Wood very much any more, preferring the security offered by the wide-open spaces of the Flats.
3) I feel compelled to use secondary bins for all my local birding, and I don't ever take my scope. The viewing pleasure is diminished, and I have missed some distant birds.
4) I had to pay the insurance excess and my premium went up, whilst the muggers probably sold my phone for a fiver and tossed my bins into a bush.

I am officially a victim of crime. HR at work even offered me counseling, said I should take as much time off as I needed, "Thanks, see you in June" I replied. I didn't really. I did allow myself one day though, and went to Rainham, so I could look through lots of different peoples' bins.

Anyway a year has now passed, and I have never had a problem since. However if any potential muggers are reading this, they should be aware that my replacement phone is also obsolete rubbish, and that my bins have a large scratch on the left objective. And that I shoot to kill. 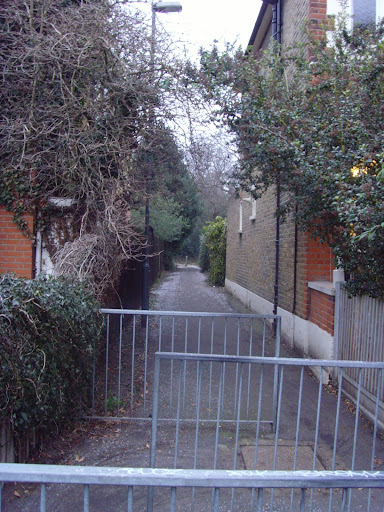 Here it is, the snicket where the evil deed was done.

Posted by Jonathan Lethbridge at 20:03