I wasn't really supposed to be birding today, as I may have mentioned. As it was I managed to sneak out of the house - albeit with a baby on my back, so Mrs L probably did notice. I was resolute, I was going round the Flats, and that was it, Pendulines be damned. I had just seen a Stonechat, and one of the Reed Buntings had just zoomed over, when.... "beep beep"....

Resolutions went out the window, and about 45 minutes later, I found myself on the boardwalk, looking at some recently vacated reeds, and being gripped off by a bunch of birders who had had:
"excellent views"
"just in front of where you are now"
"no, about two minutes before you arrived"
"yes, they just flew off high NW"
"really high, doesn't look like they'll be back for a while"
"when they did this last time they weren't seen for about two days" 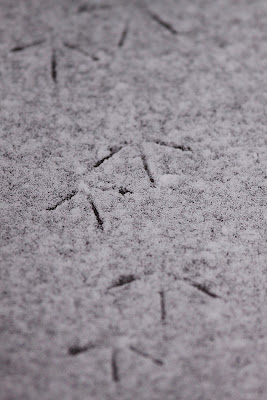 Lack of avian subject matter promotes art
Back at home, Kids Corner was looming, but oh look, a Great Grey Shrike, within the LNHS area, about 8 miles away, and showing well. You can see where this is leading so I'll cut to the chase - dropped wife and kids off at this party, went off to Potter's Bar where I met Vince, dipped the Shrike, got very cold, drove back, picked up kids, wife and balloons, went home, sulked.

Oh, and about an hour in to the Shrike dip, phone goes off, and it's Blowmonkey, who has apparently been enjoying excellent views of the Snowy Owl in Cornwall. Superb he tells me, really really good. I'm looking forward to the photos. 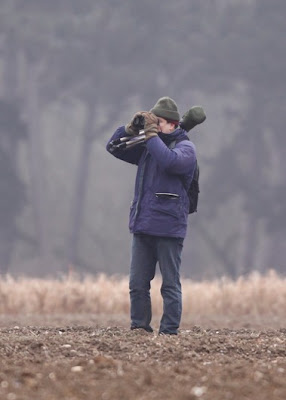 Vince dipping a Shrike in London

Posted by Jonathan Lethbridge at 20:29