No birding in Wanstead today. Instead here is a an aerial view of the patch, with my self-appointed boundaries in red (the Park) and blue (the Flats). The un-named round pond at the western end of the Park is Shoulder of Mutton, and the thin wiggly one is the Ornamental Water. The northern tip of the Flats is Bush Wood, and the small pond in the south-western corner labelled JP is the Jubilee, and Alexandra Lake is labelled AL. 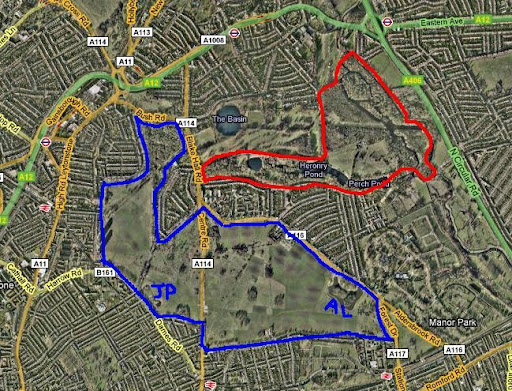 Patch rules: Either I or the bird have to be in or over the patch for it to count. If either one of these is true, on it goes. If both I and the bird are outside the boundary, to count it I would have to leg it over the nearest boundart and hope I could still see it. Clearly I would never do that, no way.

This rule came in handy today at Canary Wharf. I was on the way to East India Dock NR to try and get Black Redstart for the yearlist, and whilst waiting on the platform at Poplar DLR station I picked up a raptor over the east of the estate. Quick-draw on the trusty bins and I confirm it as Peregrine. Sparrowhawk and Kestrel are both possibilities here but there is no mistaking this profile, even with my meagre abilities. I'm outside the patch, but the bird is over it, so on it goes at #18. 3rd Peregrine of 2009 actually, after 2 at Rainham on the 2nd whilst dipping the Pendulines. I didn't get the Black Redstart by the way, but I did get a drake Shoveler, which was a patch tick. Not doing East India this year, too far to go, spend more time travelling than birding.

Posted by Jonathan Lethbridge at 20:55