The day dawned bright and clear, a real treat on Shetland. We spent the first part of the day properly exploring Hoswick, during which I plunged beyond my boots into a peat bog and had to return home to try and clean up as best I could. This wasn't very effective and for the rest of the day a persistent eau-de-bog aroma could be detected in the car. And all for a poxy Jack Snipe, unlike me too light to sink. I need one of those thermal camera thingys that birders are beginning to use up here - rather than wade through habitat you just point it at ditches, plantations, bogs etc and it shows where the birds are. Ok so that white blob in the viewfinder might be a Wren, and you'll have to go and find it to be sure, but the real advantage is when nothing at all shows and you have just saved yourself a tiresome slog, and potentially also a soaking. 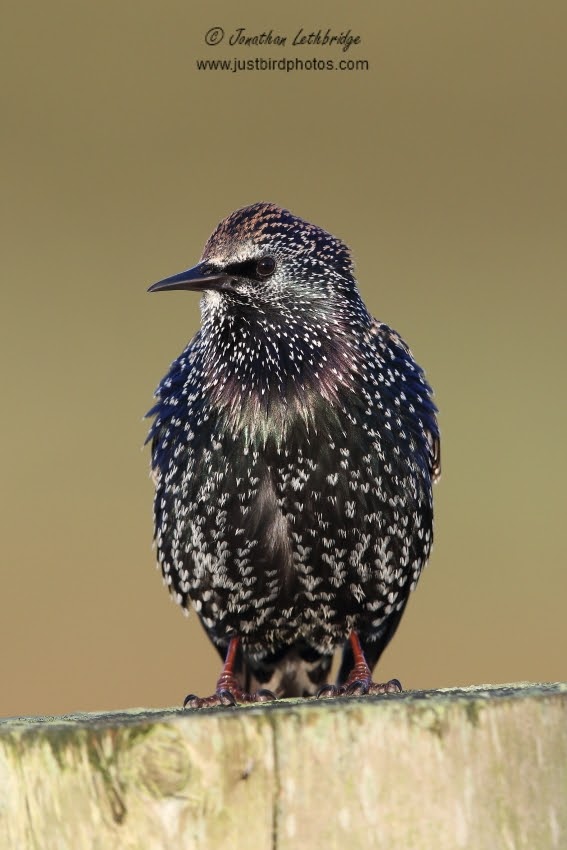 News of a Lanceolated Warbler on Unst pulled us away from Hoswick. Not in a tyre-screeching  way, but in a "let's head north a bit just in case" kind of way. Three of were reasonably relaxed having seen this elusive and often confusing species before, we were also a little sceptical at this stage based on past experiences of "Lanceolated Warbler" found by people we had never heard of. Pete however still needs it (note tense) and was chomping at the bit to go for it. Our quandry was solved by Nick and Claire being a few minutes behind us and offering him a lift up there, and so reluctantly we split up, passing him a Double Decker in case it did turn out to be one.

Howard, DB and I continued to Fladdibister where we put up a Lapland Bunting, the only one of the trip, and at Wadbister a search for a previously reported Shetland tick in the form of a Black-throated Diver netted two, along with the long-staying King Eider again.

Continuing up towards Nesting we were diverted from scanning the sea by news of a Rustic Bunting close by at Kergord. This had done a runner by the time we arrived, but in looking for it Bradders stumbled on a Radde's Warbler, possibly a better bird in a Shetland context. This  initially proved extremely elusive in what was not a particularly big plantation (not the main wood), but eventually gave itself up. The biggest issue was that you could not freely walk around the whole perimeter, and of course the bird showed right on the corner just around from where me, Howard, DB, and Donald W were standing. We could see the people watching it just a few metres away, hear their camera shutters pounding, yet were about a million miles away from seeing it ourselves, we might as well have been in the next valley. Donald and I threw decorum to the wind and hurtled around the plantation, arriving just in time to get views of it as it worked its way along the top side and then slunk back in. A lovely bright bird, beautiful, and what a super!

With the bird confirmed and details of people who had photos taken we went back to the coast and continued where we had left off. Great Northern Diver was our target, and at our second stop we immediately picked out three birds together off Skellister. Howard called one as having summer plumage, and it did indeed look much more dark and contrasty than the other two. Once we had our scopes up it also looked a bit..... wait a minute. I think it was Bradders who said "Er, look at the one on the right!" but we already were. Ooof! A summer-plumaged White-billed Diver! The team had already found one of these in Northumberland on the way up, a party I was sad to have missed, but I was here for this one. My various crappy records shot do it no justice whatsoever, but this bird was a stunner. News travels fast on Shetland, and with so many birders nearby looking for the Kergord birds it was not long before more people arrived. We got these arrivals onto the birds, now slightly more distant, and moved on feeling very pleased with ourselves.

Our last stop was at Swining, a lovely house surrounded by a mature garden. We dug another Yellow-browed Warbler out here, but the real prize went to the dog Otter that more or less swam up to us on the shore of the voe, not spotting us at all, and only became aware of our presence upon hearing my camera shutter. It looked quickly in our direction, and slipped back into the sea. 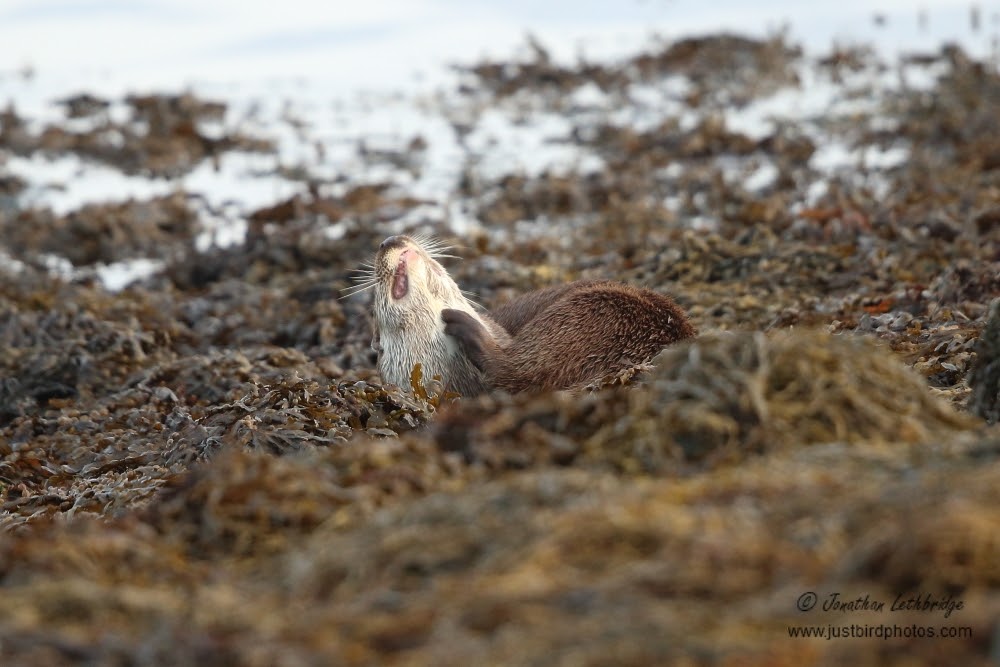 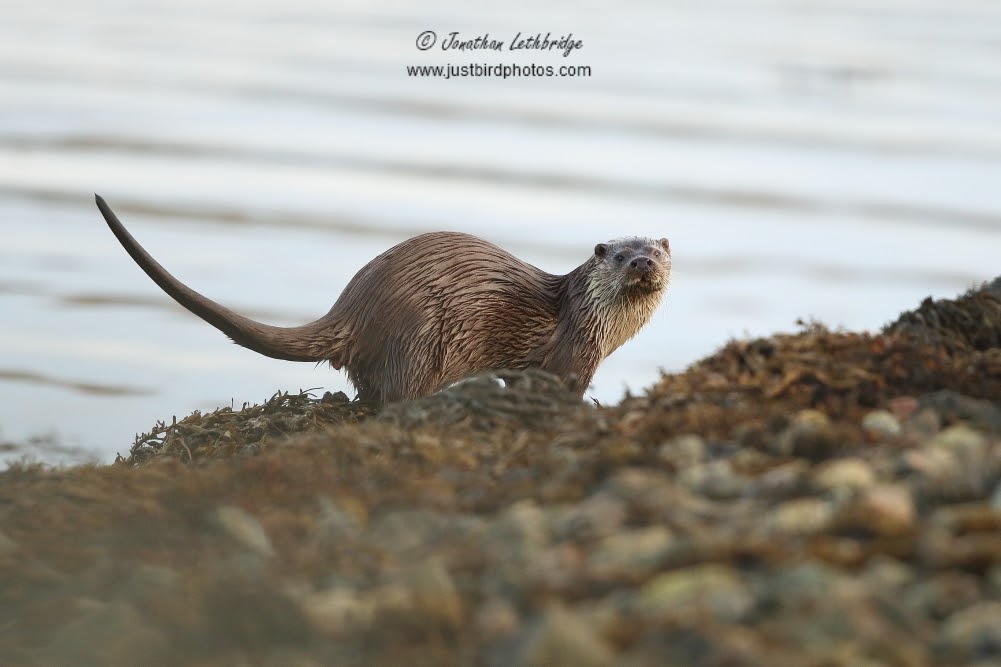 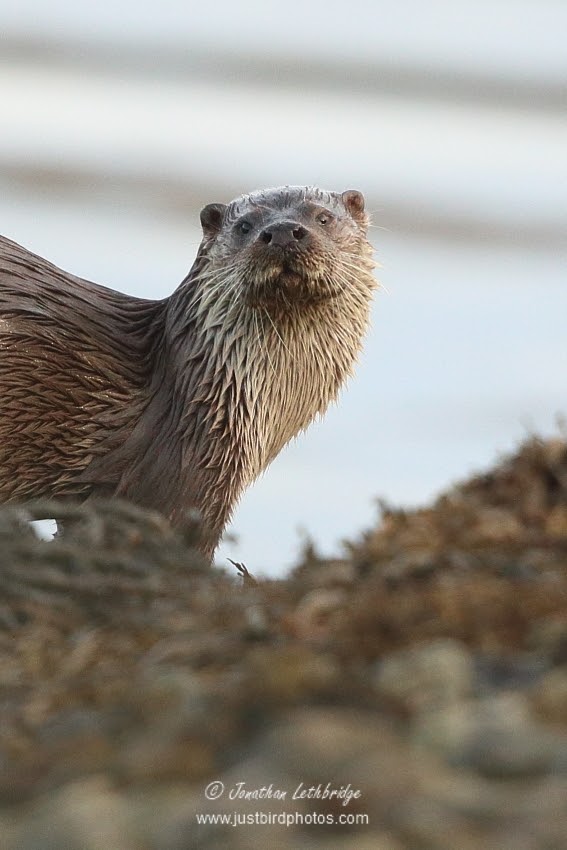 So quite the day, and a shame that Pete had not been there for the exciting bits. The Lancy had slightly predictably turned into a Gropper by the time he got to Unst, more disappointingly there had been photos that could have been published and saved people the trip. Still, he had seen a very showy Bluethoat, a Little Bunting and a Ring-necked Duck, and scooped the Radde's on the way home, so ultimately had seen more rare birds than we had, only missing the Diver which would no doubt still be present for the rest of the week.

Posted by Jonathan Lethbridge at 11:54