The crossing was uneventful. Despite the Force 8 winds and the prospect of a lumpy ride, the wind direction was predominantly from the south, and that seems to have little effect on the vessel. The cabins are down a few levels, and the bunks are aligned port to starboard rather than bow to stern - maybe this contributes to an easier crossing. Then again maybe it does not; the people who came over the following night had a horrendous time by the sounds of things.

Anyway, with no sea legs at all we repaired to a nearby Lerwick café for breakfast after first ticking Black Guillemot. The abundance of these (now) silvery stunners is one the most engaging things about Shetland, they're by far the commonest bird on the water - everywhere you look you'll see them bobbing about. Eiders are perhaps more obviously numerous as their flocks can number hundreds of birds, but I reckon that bird for bird there are more Tysties. This blog is all about scientific rigour.

Sated, we did what traditionally all arriving birders on Shetland do. We mopped up all the decent birds on the mainland whilst the going was good - the Sunday forecast looked horrible. A distant King Eider at Girlsta, a Great White Egret at Sand Water, a Red-breasted Flycatcher at Voe, and a Woodchat Shrike at Aith. Three of these were new Shetland birds for me.

In between we poked around various bits of habitat not seeing a great deal other than Chaffinches, before heading to East Burra for a Red-backed Shrike, our first Yellow-browed Warbler, and a bonus Hornemann's Arctic Redpoll that our photos helped confirm. After that we unloaded our bursting car into the digs, and toddled off for an Eastern Yellow Wagtail at Noss - another new islands tick. All very calm and soothing, albeit a bit processional, but it did mean that our end-of-day list looked like this - pretty darn good for a few hours. 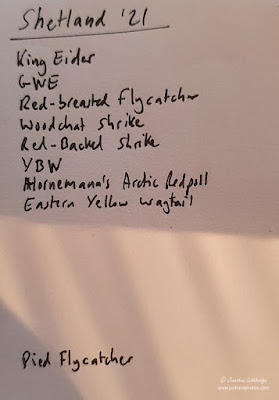 We finished the day dipping a Semipalmated Sandpiper at Virkie, before getting stuck there by a birder parking his car in a ditch and blocking the narrow road. With dusk approaching and a need to get up to Lerwick to stock up on food for the week, a thought doubtless shared by many there, we got out and used weight of numbers to physically push it out. Lots of people sat in their cars and did jack of course, but there were enough of us to manage.

And so that was day one. I won't bore you with the shopping bit, but we did very well indeed.