Nearly there and a new toy

Nick was kind enough to text me about a Wigeon in the Park today after my abortive early morning sortie on the Flats produced no new birds. With my annual record within touching distance I've been trying quite hard, getting up every day for first light for a stomp around some boggy bits of the patch in a so far fruitless search for Jack Snipe. I confess it is becoming a little wearing. Wigeon is perhaps the last truly expected bird for the year and takes me to 117. One more to equal my record, two more to beat it, three to get to the nice round number of 120. Five to beat Nick, currently on 121....

In other news I have bought a new toy, a second hand Canon EOS 80D. This is very much a consumer camera but it is significantly lighter than my normal camera. 730g vs 1551g to be precise, and that is a meaningful difference for an old guy like me. It also has the benefit of being five years more technologically advanced than my now venerable 1DX and has a lot more pixels. Pixels are not everything of course, and for many years it appeared that my much older cameras could produce images that far exceeded the quality of in theory more modern cameras but let's see. It has been ages since have used anything other than a 1 series, mainly as I tend to treat gear really really badly, frequently falling over on it and so on, and anything less robust would simply fall to bits, but of late I have been finding I look at my lump and decide I would prefer to go birding without it. And the worst quality camera you can have is that one that is at home when that magic bird pops up in front of you.

I'm pairing it with a 400m f5.6 lens - beloved of bird photographers of old before the introduction of the 100-400 zooms - which gives me the same range, roughly, as with the 500mm + 1.4x, and with the higher pixel count in theory I have more "reach". It feels so light as to be almost unbelievable, but on my first trip I found it almost impossible to use! I couldn't hold it steady! It must be conditioning; I am expecting to be managing close to 5kg but this is under 2kg and as a result it mucks up my balance -  or that's my theory anyway. When I moved from a normal lens to the 500mm I also started taking worse photos instantly, so this could be the reverse. The viewfinder is also tiny tiny and the shutter sounds so very imprecise and, frankly, rubbish. But in all other respects it is really fancy with all mod cons. A rotating touch screen, wi-fi to view images on my phone instantly and all sorts of other things I'll probably never use. For now though it appears I have a big learning curve to climb just to use the most basic functions needed to take a photo. 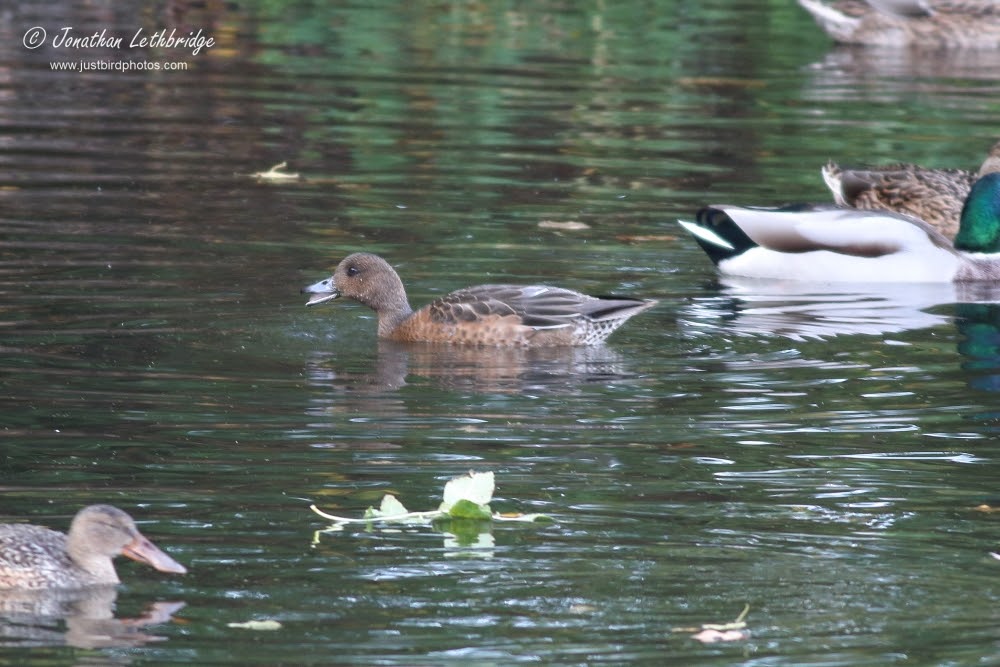 Here's the Wigeon. Hard work, and the photo is in no way sharp as I was shaking like a leaf! But it works at least, and if it means I have something to record what I see then I would rather that than nothing at all. I'm not giving up proper photography. When I go off on a specific mission I'll be taking the older stuff that I know works how I want it to, but this could easily become the backup body in place of the now ancient 1D Mark IV.
Posted by Jonathan Lethbridge at 17:58