Little did I know when I booked a trip to Cyprus for my daughter and I quite how desperate I would be for a Wheatear fix come April 2017. It had been in the diary for months, but by late April I assumed I would have had quite a few birds on the patch. I have had one. One solitary Wheatear on the 11th March, and I have somehow missed every single other one. There have not been overly many, but still, that's a poor reflection - and I've been working the patch quite hard!

So to Cyprus then, which by the time it came around was sorely needed. The aim was twofold. Show my daughter part of this lovely island (I'm not into the boycotting thing), and point a very large lens at Cyprus Pied Wheatear. This was a great success, and whilst we were only there for a couple of days, I surprised myself with quite how productive I was. The plan was straightforward enough - get up early and spend the best part of the day wandering around Cape Greco and environs, return for breakfast and then do whatever kiddo wanted to do, which was basically swim. Fair enough. We also popped in to Oroklini both to and from the airport. 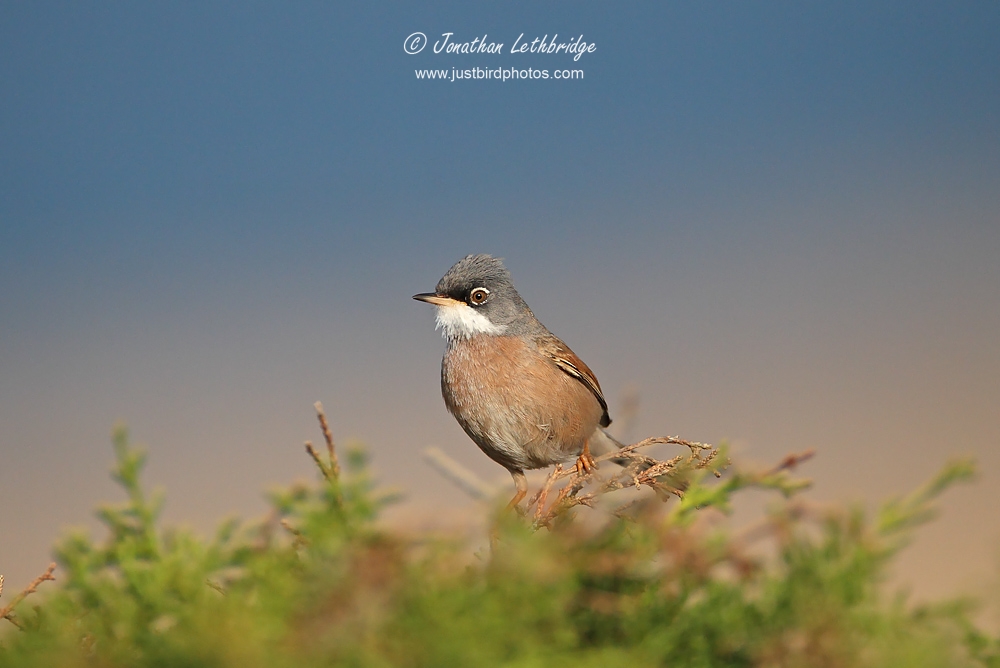 I've been to Cape Greco on each of my birding trips to Cyprus, it is a wonderful spot and whilst I am sure there are many wonderful spots, if you find a site that you enjoy so much every time, why bother looking for others. On our first morning there we saw no other people for three hours. On our second there were three ladies out for a jog. There were no dog walkers, no motorbikes, no cars, no sirens. Just crystal clear air, a sparkling sea, and birds everywhere. Crested Larks were abundant, Spectacled Warblers nearly so, and Alpine Swifts screamed overhead. And of course there were Cyprus Wheatears. 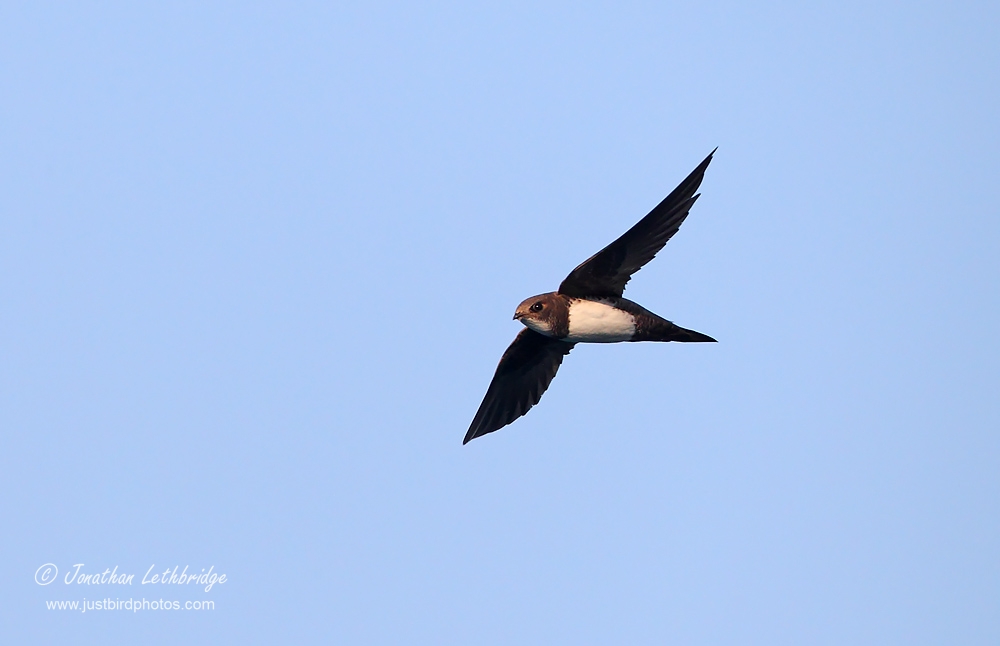 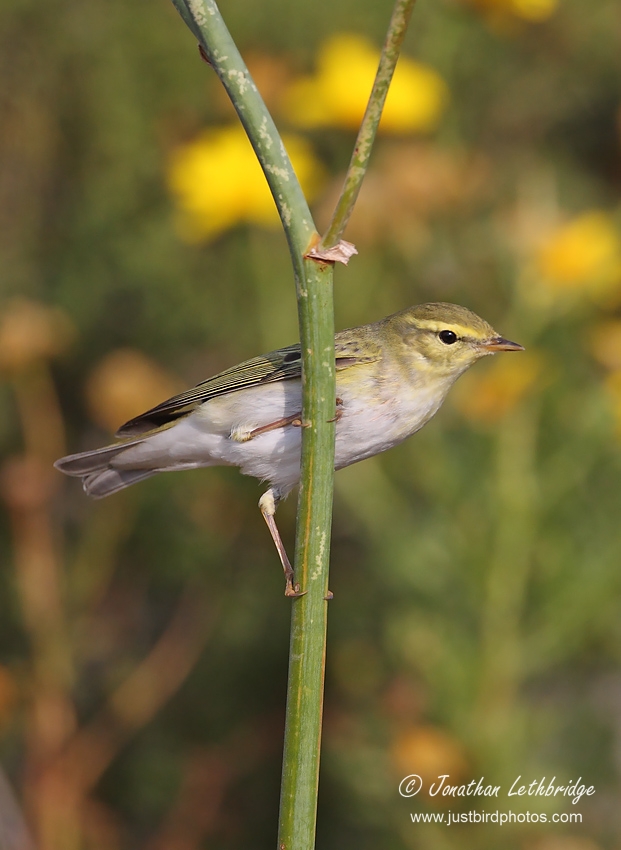 The first birds we saw were paired up, and no amount of stealth could get us anywhere near them. Being two people probably didn't help, but one bird would always alert the other and as soon as one flew so did the other. Thus the first morning passed relatively fruitlessly, although we had a nice walk and Kate had a nice explore (we took the Shetland radios so that we could keep in touch). After taking almost no photos and instead walking around the headland, we ended up at the picnic site (all sites marked on this map). We didn't go to all the numbered sites, just the ones below.

1. Although the dump seems to have been capped since my last visit, the tracks below it are still great for birds and this is where the friendly Wheatear was.
3. Main area of scrub, lots of Warblers and some unfriendly Wheatears!
4. Cliffs underneath main promontary, with two profitable paths. A lower one at sea-level (red), and another about half way up (orange). There is a link between the two but it's not recommended, instead swap between them at the western end.
7. Picnic area which is clearly signposted. Cyprus Warbler exactly where I was expecting it.

The scrub between areas 3 and 6 was very birdy indeed, with a what I think was a Collared Flycatcher on the first morning, as well as the obligatory Hoopoes and various other maquis-type birds. On our way back from the abortive photo mission we drove down to the dump tracks. Before we even got to the end of the road in we found two Cyprus Wheatears actually in front of the car, one displaying to the other with some kind of wing flaps. By the time we got out they had done a runner, but possibly one of the birds was now down by the sea caves right on the coast, singing from one of the danger signs. This bird seemed to allow a very close approach indeed, but unfortunately the light was bordering on harsh now, plus the hotel breakfast was not far away from closing up. Reluctantly we went back to Nissi, only about ten minutes by car, and had a huge feast at the Adam's Beach resort. Bloated, all we could then do was flop by the pool for the rest of the day..... 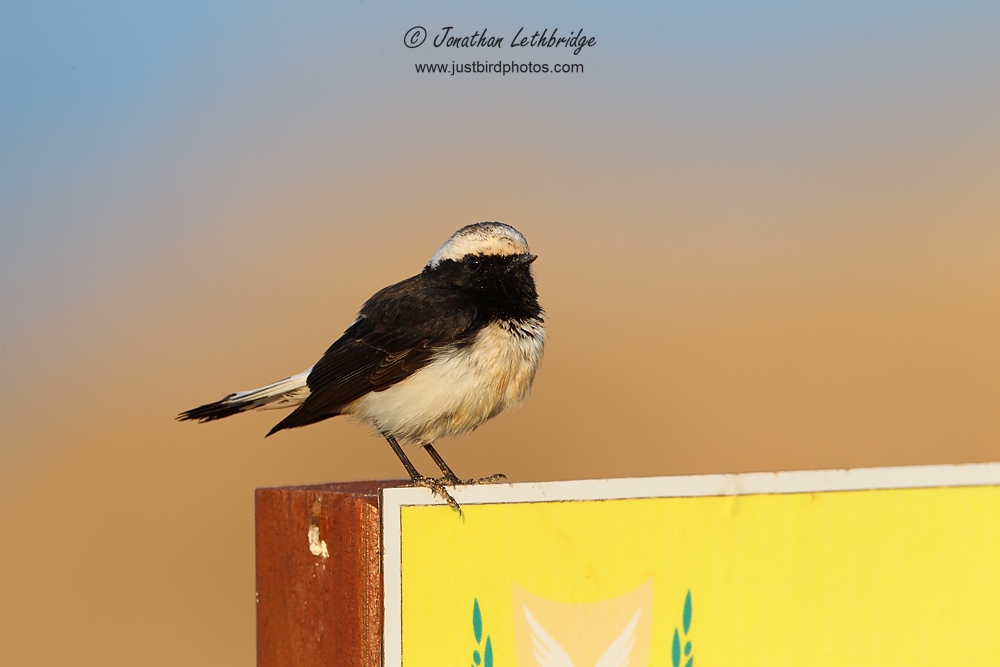 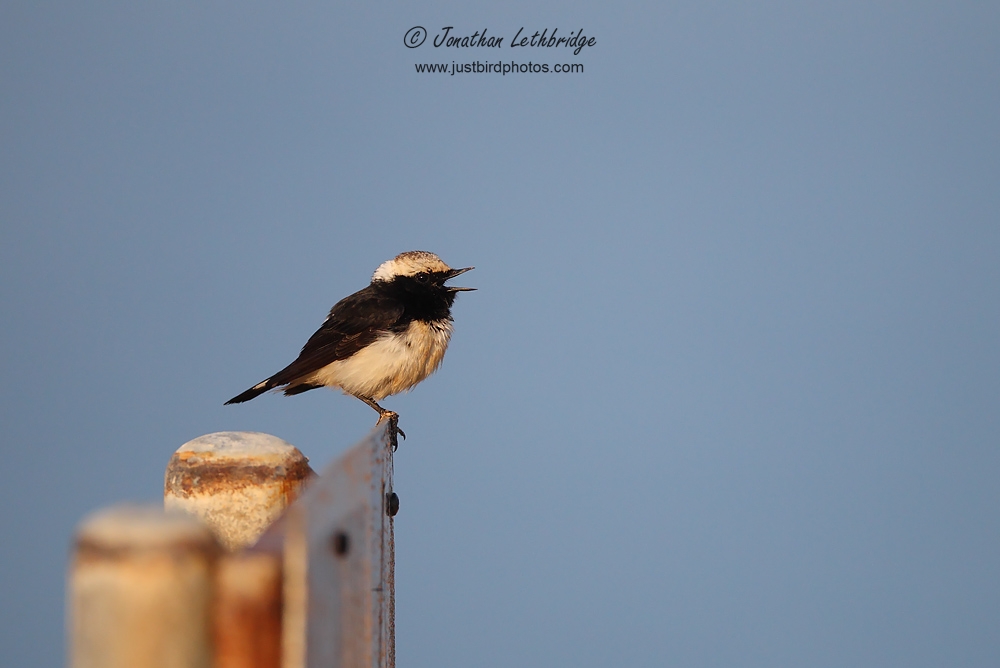 The following morning we were up even earlier, the child less than convinced. She gamely got ready but this time stayed in the car with her kindle and the radio. This left me free to pap the Wheatear which thankfully was still exactly where we had left it - singing from the same sign in fact. Now on my last visit I had been armed with a 500mm lens. This time I opted for the 800mm, as after all Wheatears are small birds. I am glad I did (for one thing the other lens has a few issues at the moment as I discovered on more recent trip) as it performed amazingly, including with a 1.1x teleconverter mounted, which took it up to a staggering 1120mm, and that's without my camera's 1.3x crop. Monopod all the way in these circumstances, but many of the images below are with this combination - remember that the light in Cyprus is first rate, none of the rubbish you get here! First up was the need to transform the perches, so I spent a good ten minutes gathering a number of rocks and placing them atop each of the signs that I had seen the bird singing from (I removed them afterwards) before retreating to see what happened. You can probably guess what happened can't you? This: 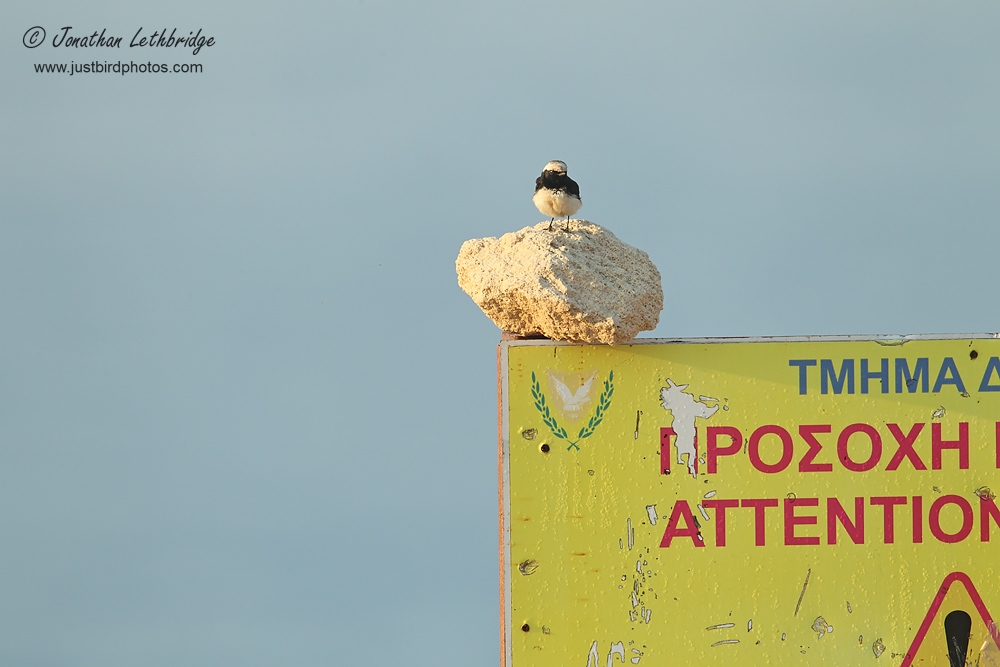 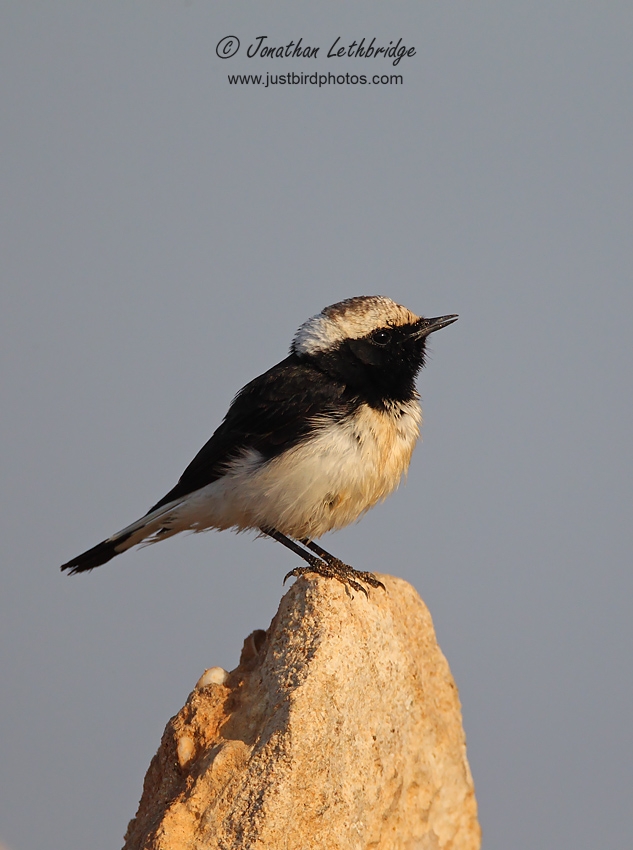 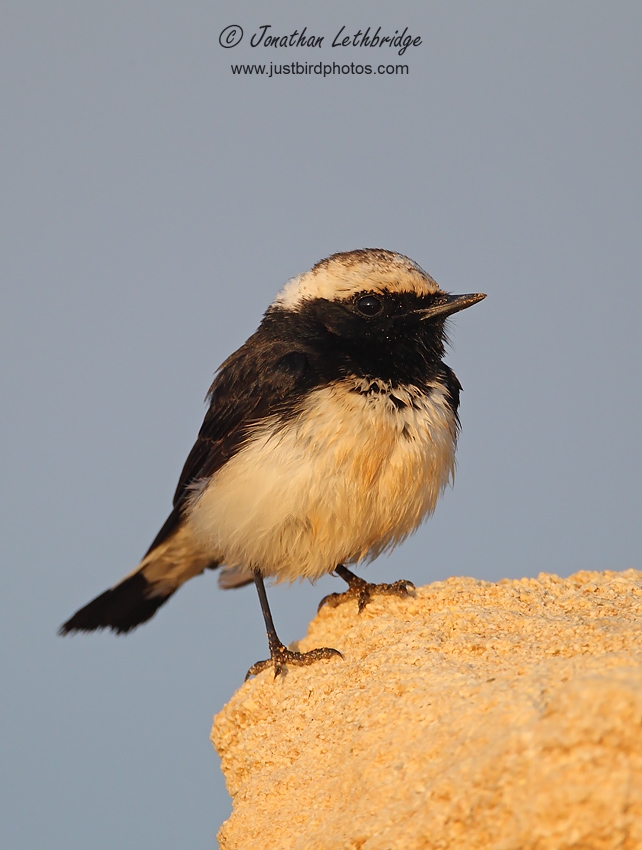 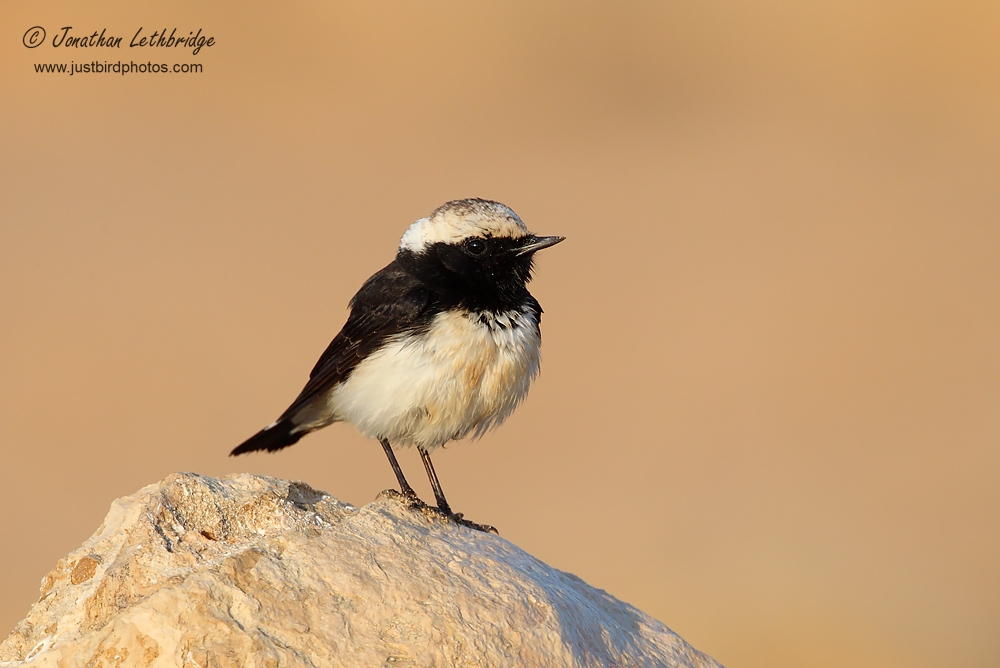 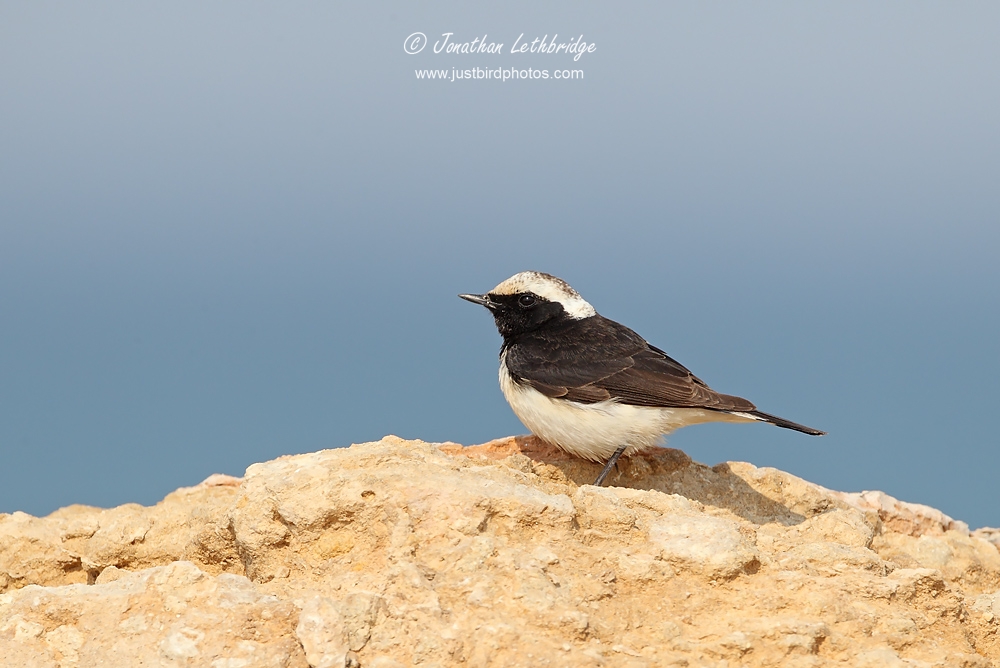 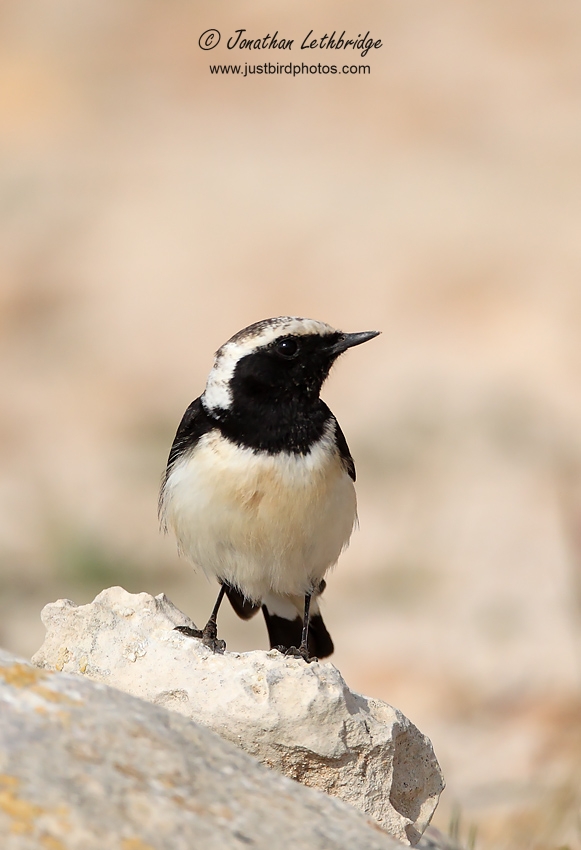 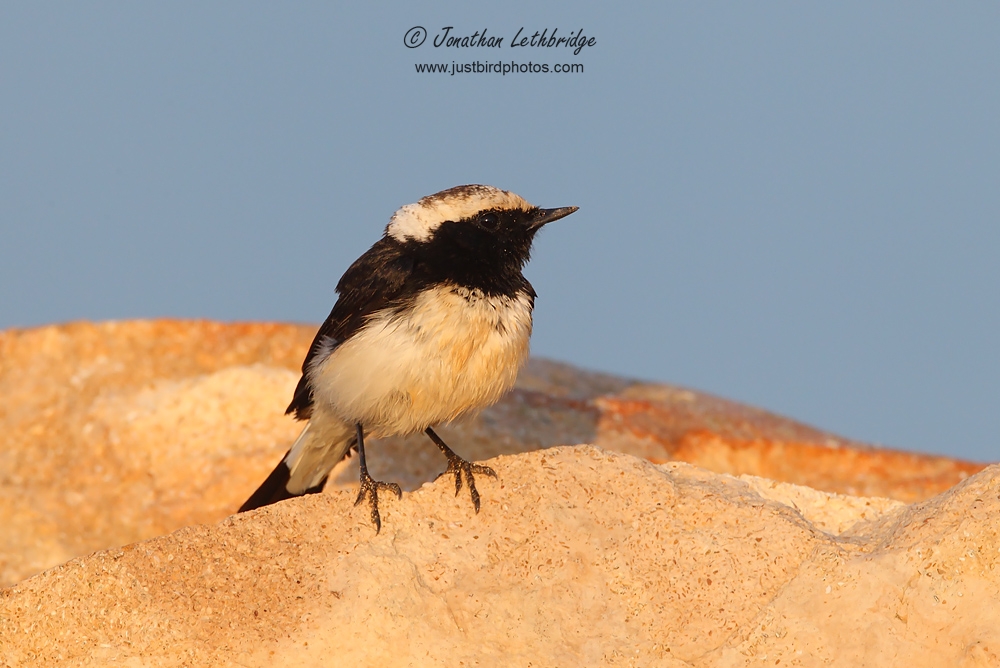 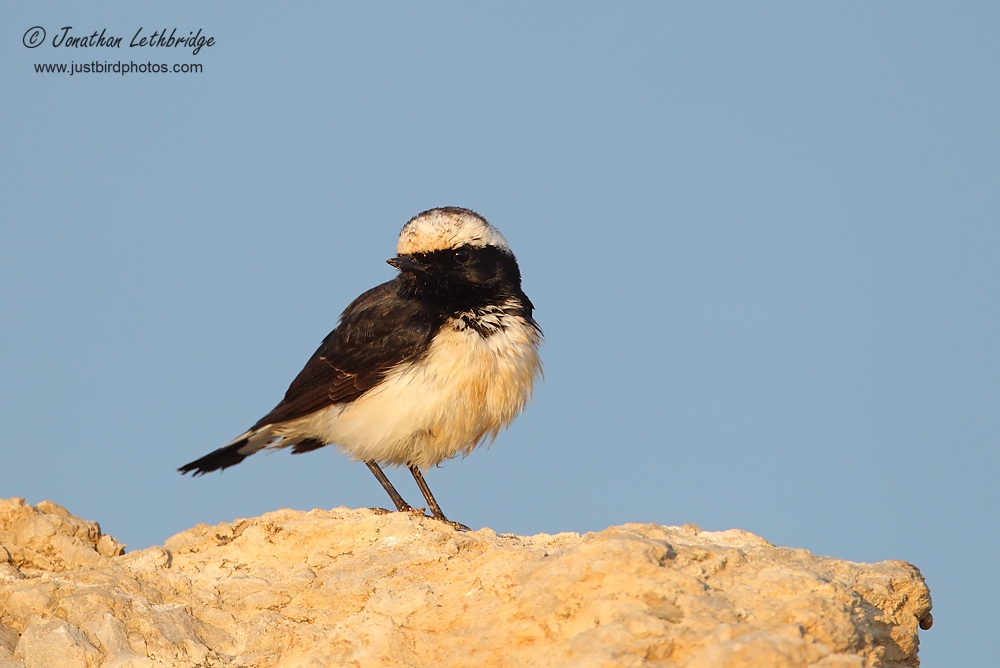 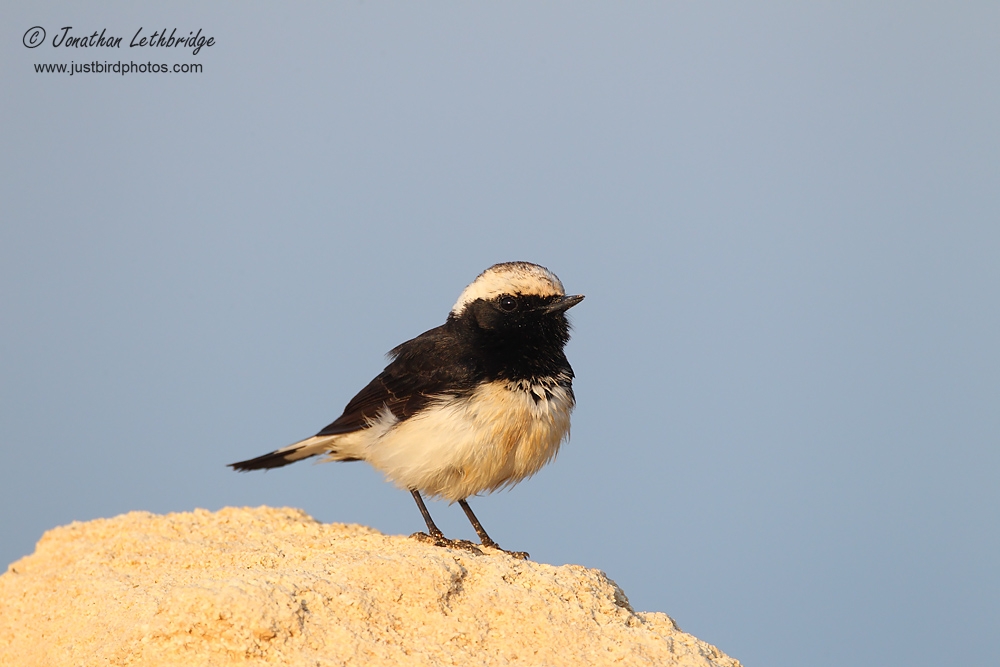 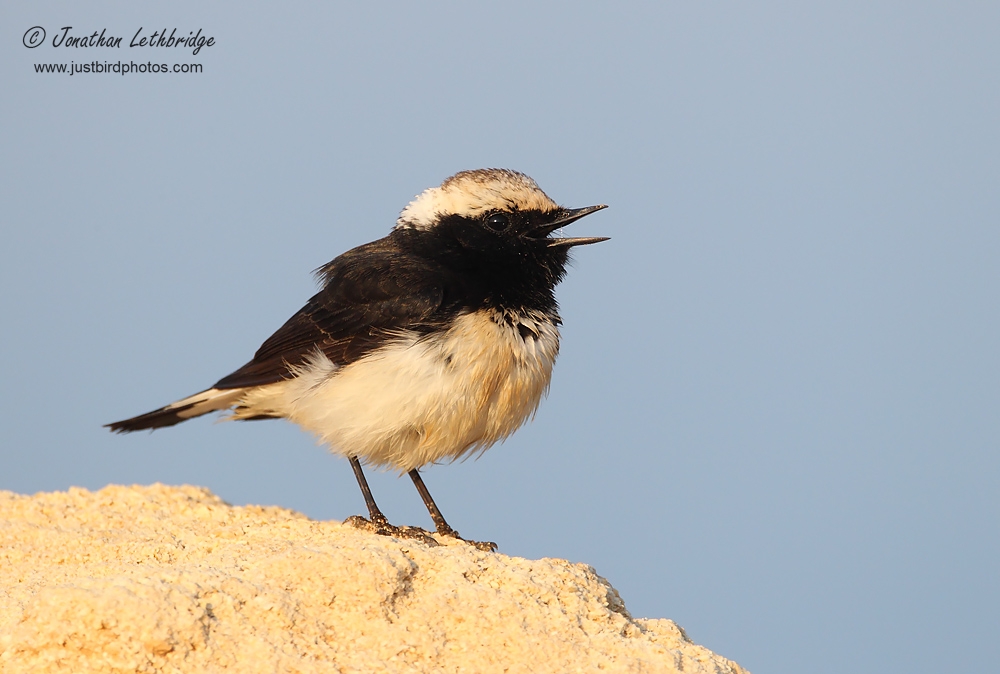 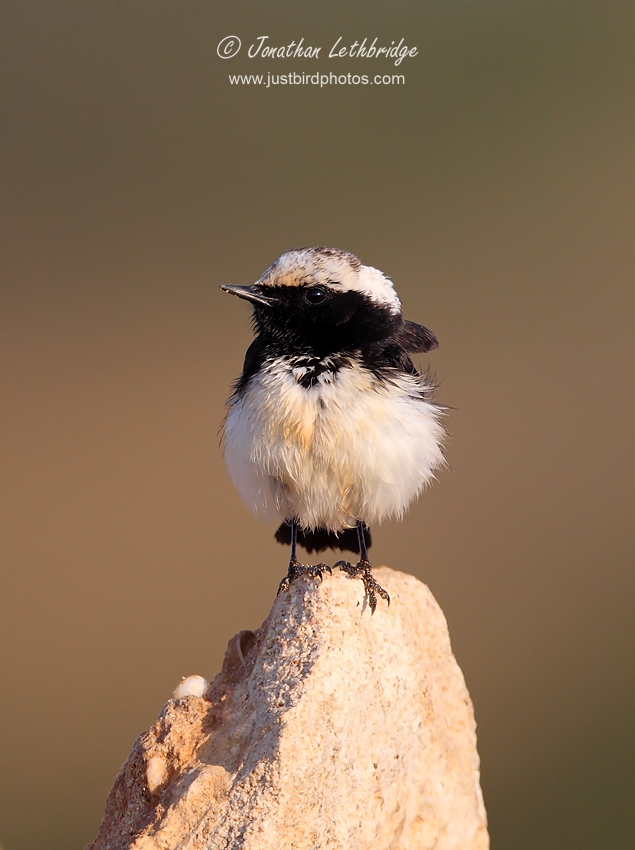 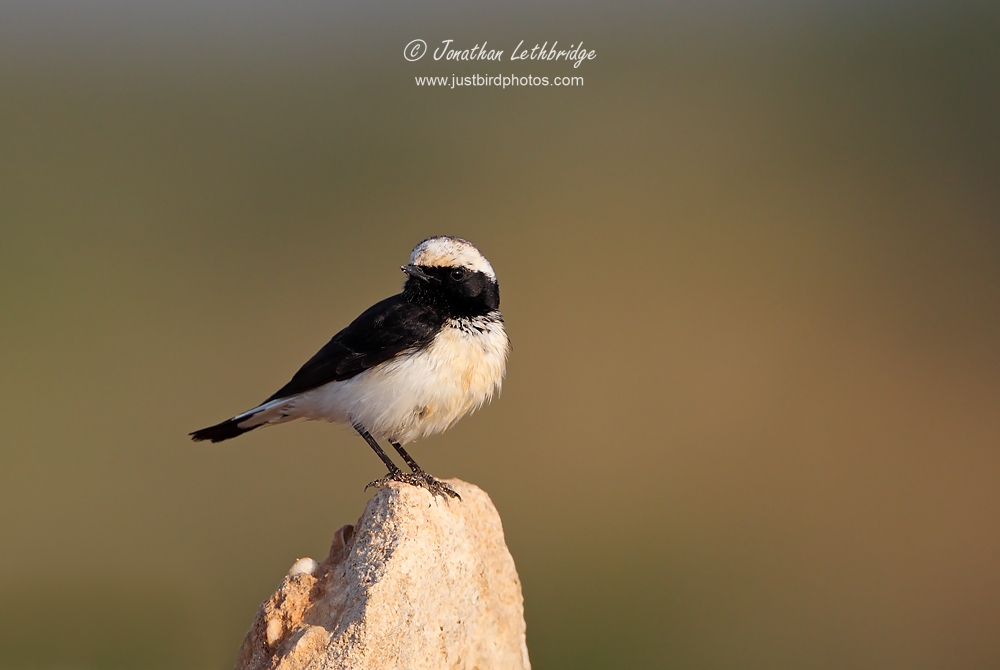 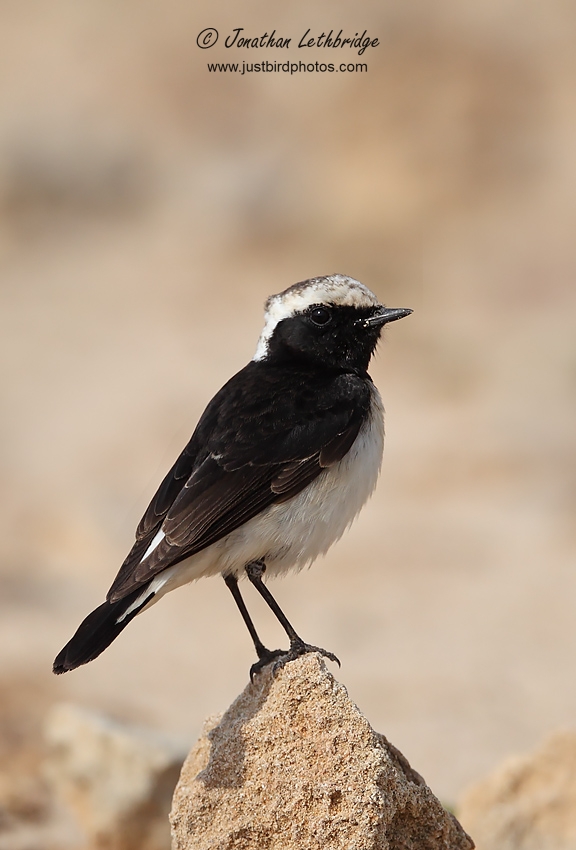 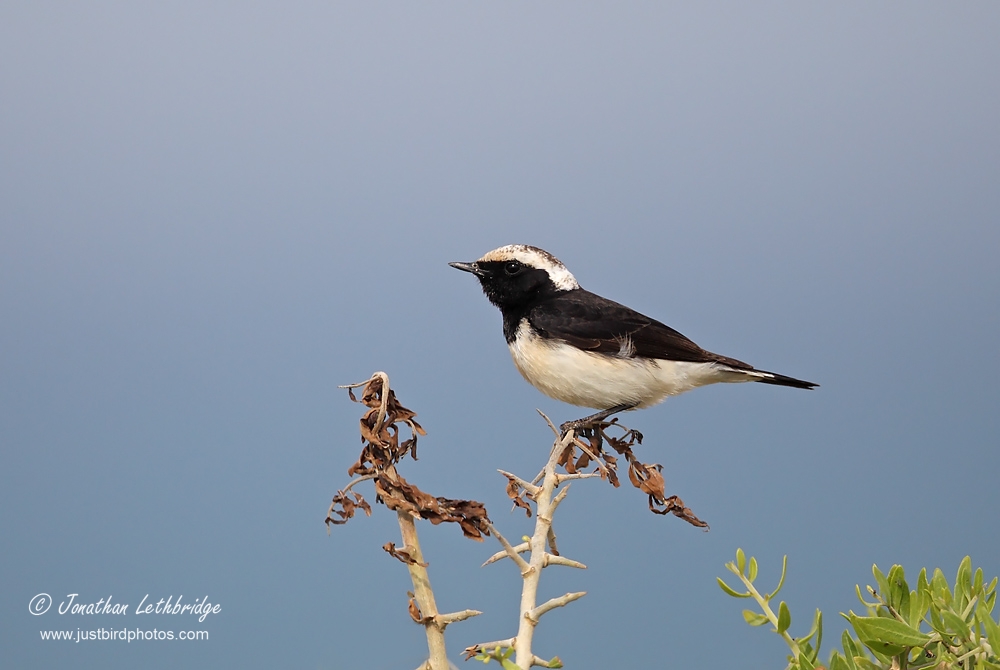 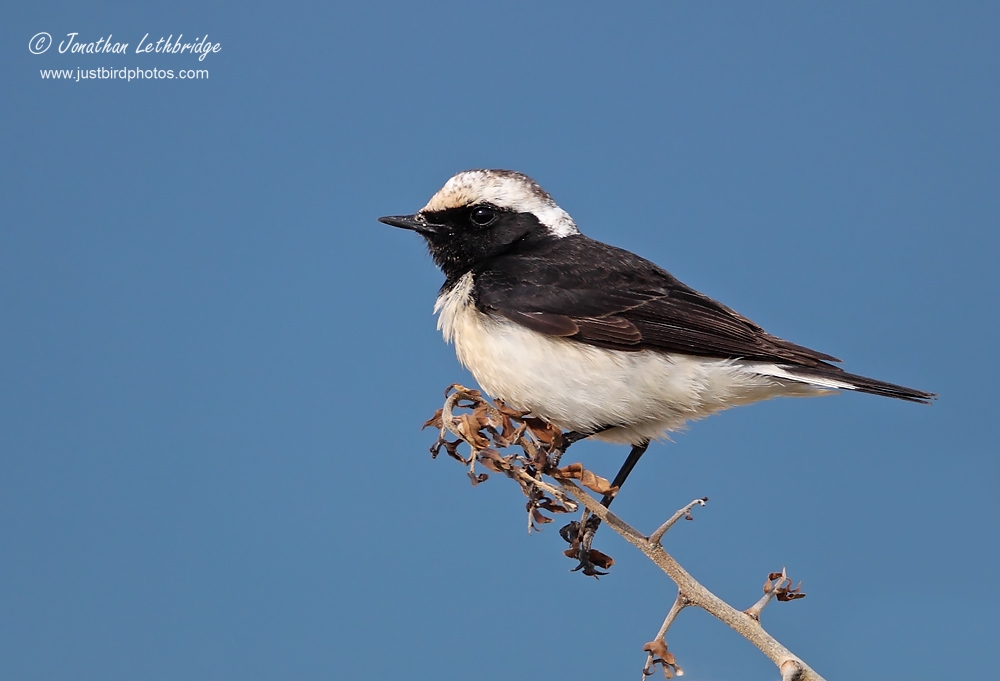 The rest of the day was again spent dallying at the pool, and at 4pm we had to leave to fly home. You could say it is pointless going somewhere for so little time. I might agree, but I also might show you 300 photos of Cyprus Pied Wheatear! We stopped at Oroklini again, and this time managed to find the Spur-winged Plovers in a field opposite the marsh. Loads of Stilts, Garganey, several tonnes of Cattle Egret, and masses of hirundines. 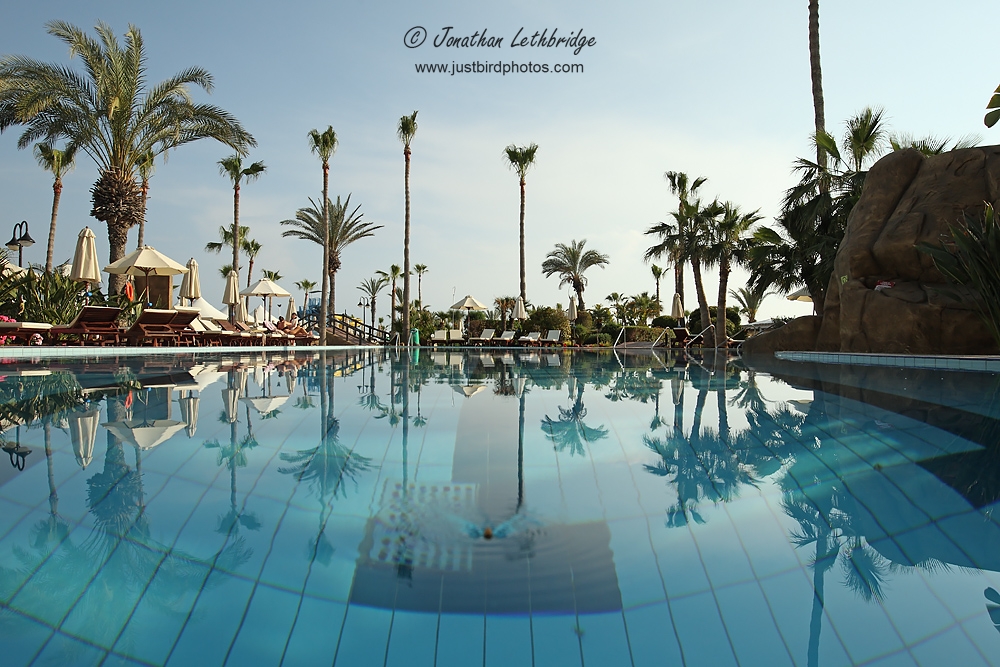 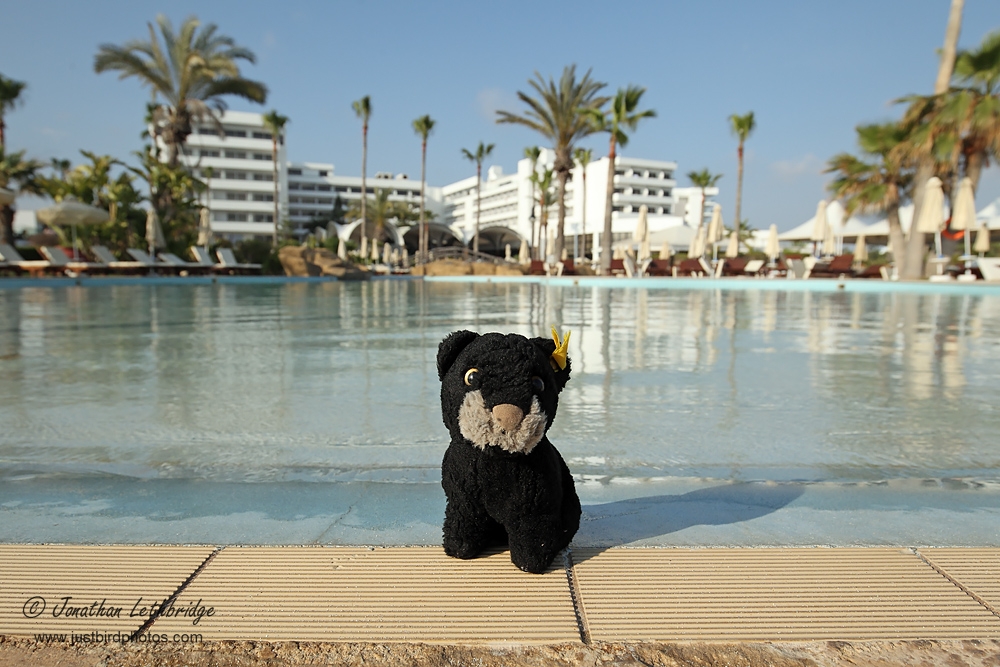 Posted by Jonathan Lethbridge at 21:29