Sunday continued in much the same vein as Saturday, but without the birding. Somehow the clocks changing caused me to sleep in until gone 9 (the new 9), which was close enough to the start of the football on Wanstead Flats that I elected not to bother. From my foray on Saturday morning I felt I probably wouldn’t be missing much, it still feels like migration hasn’t really started, at least locally. Instead I continued to potter up and down between the house and the greenhouse, tidying, sprucing, rearranging. I do like this time of year, there is interest on every front, and I can chop and choose where I spend my time knowing that no matter where I land I will enjoy myself.

Once again it was a beautiful day – not hot, but warm and pleasant enough to feel spring-like. Chateau L became a hive of industry, windows were thrown open to get some fresh air in, the washing machine went into overdrive, and for the first time in many months clothes got to dry outside. Surfaces were wiped down, dusting occurred, the atmosphere was highly positive. More importantly, barbeque coal and rosé were sourced, and once the grill had been cleaned of all the winter gank, the pleasant smell of charcoal started to drift into all the windows we had opened, and with a little bit of shift in the wind direction, blanketed the washing drying on the line in a nice grey cloud.

Oops. You can’t teach this kind of genius, you either have it or you don’t. Oh well, you can’t beat a bit of outdoor cooking for promoting the joys of spring, and thus the day passed very pleasantly indeed. Rosé was replaced by Gin & Tonic at some point during the afternoon, and we simply enjoyed relaxing at home. I am glad I can do frenetic and lethargic and be equally enamoured by both. A small amount of sky watching occurred, but unlike Saturday when the first Buzzard was right on time, I saw nothing all day. 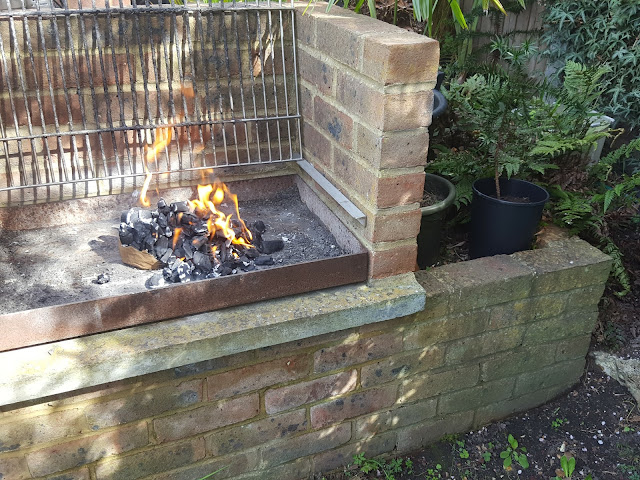 I made it back on patch this morning and barely saw a bird, confirming my suspicion that it is still a tad early. A bit depressing actually, what with all the litter from Sunday’s football, all the razed areas of habitat, and then to top it off a nice bit of fly-tipping.  However just as I was on the point of giving up on a bad job and leaving the Flats to catch the train, three ducks heading over my head west caused me to look up. Shelduck! Annual, and always at this time of year, but almost always a flyover going east early morning. Excellent to get these therefore, but also confirmation that working a local patch can sometimes feel like you are stuck on repeat, merely going through the motions.
Posted by Jonathan Lethbridge at 19:18