I'm not sure if you should dwell too much on past successes, and certainly it is rare that you find me doing so on this blog, but every now and again I think a bit of reminiscing is good. And anyway, it's not like I've been birding lately and have any Wanstead news.

Anyhow, a few of my personal favourites. It is worth noting that all of these are eclipsed by some of the amazing mornings on Wanstead Flats. Good birds in a local context are far, far better, far more rewarding, but I reckon I've enthused more than enough about some of those, so the following tales will - mostly - be ones that you have not heard before. If there is one positive thing about twitching, you remember with absolute clarity the entire day. Where you were, what you did, who was with you, the weather, the location. I can transport myself back to any one of these as if it were yesterday.

Hume's Leaf Warbler, Beachy Head, Sussex, January 2008
At this point I wasn't really a twitcher, but at the start of the New Year I felt I needed a day out. I had read about this bird, didn't know anything about it, yet decided to go and have a look anyway as there were a couple of other things I could do down in Sussex at the same time. I did my research on the call, and arrived early in the morning to find I had the place entirely to myself, which is exactly how I like it. I could hear the bird calling from the car, so insistent was it, and soon located it flitting about low down in the small plantation. I lost it fairly frequently, but kept refinding it due to the call. I had it to myself for at least an hour before a single other birder turned up, and this form of twitching has appealed to me ever since. Only two days later, at Cley, I was one of perhaps 300 for the White-crowned Sparrow, and the two experiences could not have been more different. Give me the warbler any day. 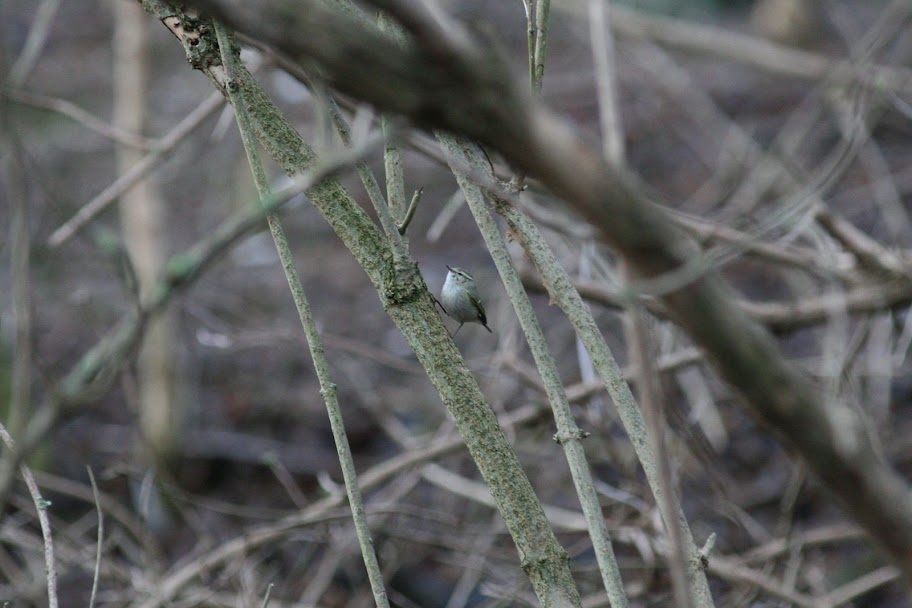 Pallid Harrier, Haddenham, Cambs, September 2009
Just a great bird, probably my favourite from the whole of 2009. It was a monday, but I don't think I went up particularly early. Certainly I would have done the school run first, perhaps even returned home for a while. I was experiencing a quite amazing purple patch of scoring, everything I touched turned to twitching gold, so I fully expected to see the bird no matter what time I left. The fens are pretty bleak, but the power of prior research ensured I found the correct rutted road, some drove or other, with a familiar line of cars bunched up at one end. I had Pudding with me, poor thing, and we left the hardcore twitchers to scanning whilst we played near the car. After three hours, with all snack food consumed, and more importantly, all nappies used, there was still no sign. On the point of considering my options, the bird appeared, ghost-like, floating across the fens. It tried to catch a passerine, not sure if it did or not, and landed in a field out of view, but that minute or so whilst it cruised slowly by will remain with me for a long time. An adult male, or near enough as to make no difference, and absolutely mesmerising. So mesmerising I totally forgot I was holding a camera until the bird was miles away. Still... 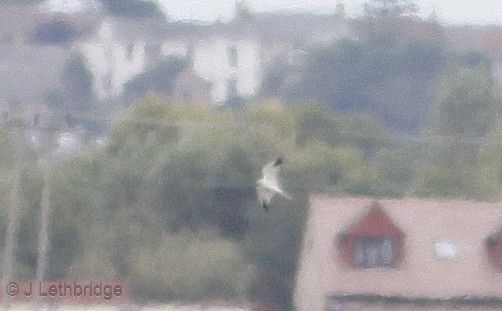 Swainson's Thrush, Shetland Mainland, October 2010
My first trip and so far only trip to Shetland was pretty special. Before going I had learned that a fellow blogger, a Mr. John Hague aka the Drunkbirder, would be on the islands at the same time we were. I am happy to plug his blog here. We swapped phone numbers, just in case one or other group found something decent. I'd been on the islands about three hours and were driving south from a place called Channerwick when he called with news of a Swainson's Thrush he had just found in the quarry at Levenwick. Where were we, he asked? I didn't really know, nor did I know where Levenwick was. As I was trying to work this out, we passed a sign saying "Levenwick". Astonishing good fortune. The Monkey executed a power turn, and within about two minutes we were standing with John, Andy and Dave looking for the bird, which had temporarily done a runner. Not for long though, and I soon got some superb views of this very pretty bird in a nearby garden. That week on Shetland was fantastic, and as a result we were unfortunately too busy twitching things to be able to return the favour. I'll be back though, and possibly soon. 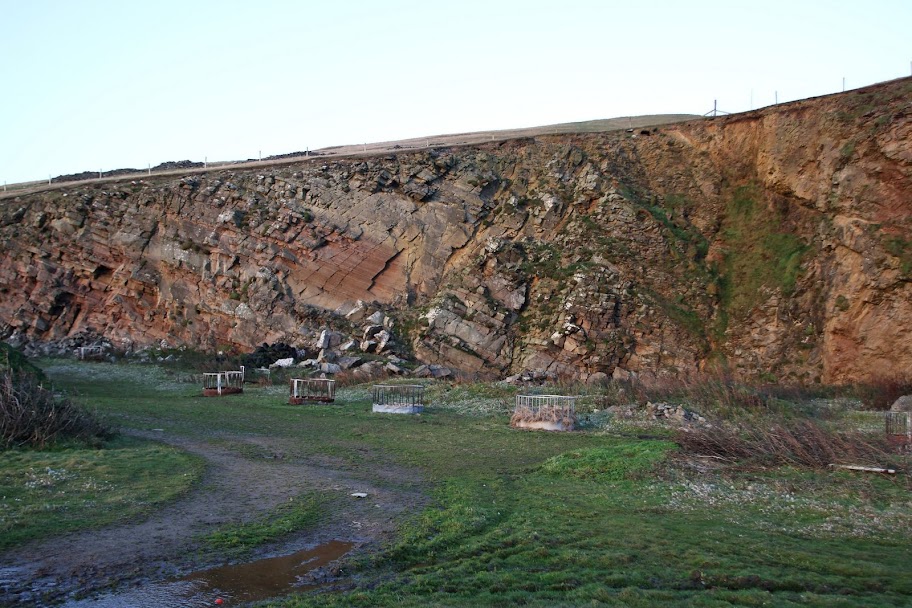 Sorry, no photo. Here is a different quarry.

Fea's Petrel, Porthgwarra, Cornwall, August 2009
No gloating twitching post would be complete without this quite amazing story of pure jaminess. I'd been to Porthgwarra only once before, the previous weekend. Then, I'd seen a decent number of Sooty Shearwaters, but that was about as good as it had got. My enthusiasm for this bizarre pasttime called seawatching undimmed, I had returned the following weekend with the Monkey and Stuart. We arrived at about 1am, the Monkey fired-up after drinking Stellas since about Exeter. Somehow we were on the cliff at 6am, and at around 11am, a guy called Martin, seen here on the left of the photo, picked up what he initially thought was a Great Shearwater to the left of the Runnelstone. I won't go through it all again, you can read about it here, but honestly, how jammy am I? The bird itself was excellent, and we had good views for three minutes as it passed slowly across the horizon, but my takeaway is the jam part. My second ever seawatching session in the southwest - the Monkey's first! - and one of the biggest pelagic prizes of all. I could spend a week down there every year for ten years and not see another one. Monumentally lucky, and whilst not a twitch, a trip I remember with nothing but broad grins (I have one now!) every time I think about it. More importantly than that though, it has ensured that I go down at least once a year on a really good forecast, just in case.... 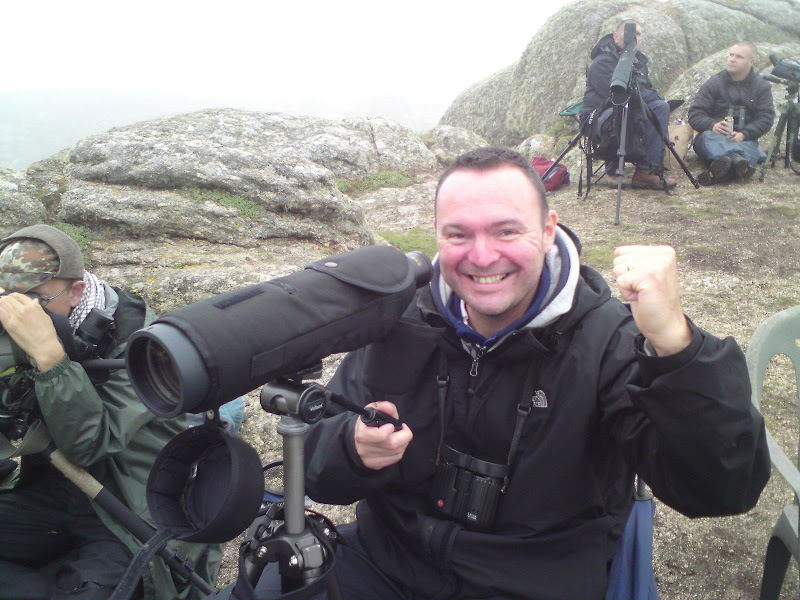