THE END is nigh. Apparently.

We're all doomed apparently. If you're of a certain demographic, right now you're likely to be doing a lot of praying. The reason? Well, tomorrow is Judgement Day. This is nothing to do with Skynet and Arnie, no this is for real. Yup, unfortunately the world is due to end on May 21st 2011. That's tomorrow, and although no time zone is specified, for me that's in about twelve hours. Sorry to be the bearer of bad news.

So many things I wanted to do. So many birds I wanted to see. But it's too late, Judgement Day cometh. Oh, and something called The Rapture. Not sure what that is, but it sounds slightly more positive than the world ending, so I hope it happens first. Scary stuff. Make the most of tonight folks, it's gonna be your last. 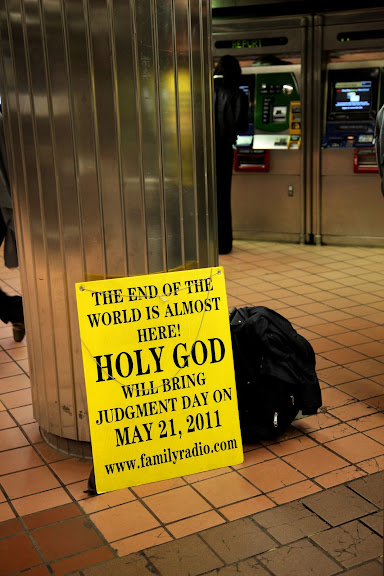 But do you know what is more scary - much more scary - than the prospect of the world ending? The number of people who genuinely believe that the world really is going to end. There are thousands of them, nutcases one and all. Most of these people live in America, so in terms of cometh the hour, here in the UK we've probably got an additional five. I intend to enjoy them by being sound asleep exactly as normal. If you're reading in Vanuatu, well, you're not any more.

This whole thing is the brainchild of an evangelical Christian freakoid called Harold Camping, the founder of Family Radio, quality child-friendly broadcasting DOOM DOOM DOOM. He's 89, so this is probably his last chance, and despite the negative implications for the rest of humanity, he's absolutely desperate to be proved right this time. He previously predicted the end of the world in 1994, and when the date came and went, he blamed a mathematical error and came up with tomorrow instead. What a twat. Well I'll tell you what Harold, my prediction is that tomorrow will come and go, and that nothing whatsoever will happen. This is because you are a crazed religious lunatic, and I am a sane human being with no nutty tendencies other than the odd twitch. Of course the beauty of my prediction is that if Harold is right, I'm not going to get much comeback, whereas mucho kudos to me if, heaven forbid, I am right and we're all still here tomorrow.

The extent to which Judgement Day has permeated the US is frankly astonishing. When I was in New York recently there were billboards everywhere proclaiming THE END. People were preaching it on the streets. The subway had posters all over it. Jesus. What is wrong with these people? How can that one spaced-out old guy have brainwashed thousands of presumably at least partially rational and sane adults? They truly truly believe, it's extraordinary - a lady came up to me near Grand Central Station, all wide-eyed, and told me to start praying. I karate-chopped her to the ground immediately. Actually I didn't. I'm British, so I just mumbled that I was terribly busy, awfully sorry, and moved round her and out INTO THE LIGHT.

Anyhow, what would be best would be if Harold died tonight, preferably in a small but self-contained explosion. As the bright light came and went, in that millisecond he would feel nothing but rapturous joy, and we could all forget about him and get on with our lives, including the delusional lady at Grand Central who really needs to get out more. Anyway, chins up, and I'll see you all tomorrow. Maybe.
Posted by Jonathan Lethbridge at 12:58