"Tomorrow I will mostly be seeing Ravens in London"

So said Paul W last night, and would I like to join him? I decided I'd do Wanstead Flats first (of note - Med Gull again, 2-3 Teal, 2 Siskins), and then give him a call. This I did, and then decided that 10 hours in Wanstead was quite enough for one weekend and that a trip, or at least a tripette, was in order.

Now Raven is a very difficult bird in London. You don't just bowl up and see them. Most records are of flyovers on the fringes of the recording area, and indeed Paul has seen 295-298 (depending on whether you ask him or George Michael I suppose) birds in London without seeing a Raven, so his confidence was all bluff really. But he had done a bit of homework and pinpointed a couple of likely spots, so Bradders and I thought we might as well. Before we tried them though, Paul insisted we do a bit of off-road driving down some dead-end tracks. We humoured him in this, and once it was out of his system, proceeded to Copped Hall in Upshire. A short walk over the M25 and we were looking vaguely downwards onto an expanse of wildish-looking countryside that no roads penetrate, basically woods and fields that you can't get to.

Within a couple of minutes we had picked out a circling Buzzards, followed by several more, and then several more. Our count peaked at around 17 birds in the air together, pretty amazing in London. Our attention was drawn to a herd of deer (don't know what kind) crossing one of the fields. As they were disappearing, Paul picked up a corvid coming in. I got on it almost at the same instant, and immediately it looked good, appearing enormous and rolling in the air. It carried on coming, and as it passed it turned sideways displaying the much-hoped for wedged tail. Score!! It flew right past and disappeared off to our right, clearly calling, yet sadly inaudible to us as a strong wind carried it away. As we turned back to the vista in front of us, I noticed what appeared to be a large corvid in the field the deer had just been in. Now my bird ID skills are relatively feeble, but I believe I said something like "Guys, I'm not being funny, but look at this bird in the field, I think it's another one". And it was! It too was cronking away but again we couldn't hear it. After a short while the first one joined it, and so for a good ten minutes we were lucky enough to be watching two London Ravens on the deck. They then flew off, though were successfully twitched at the same location about an hour later. 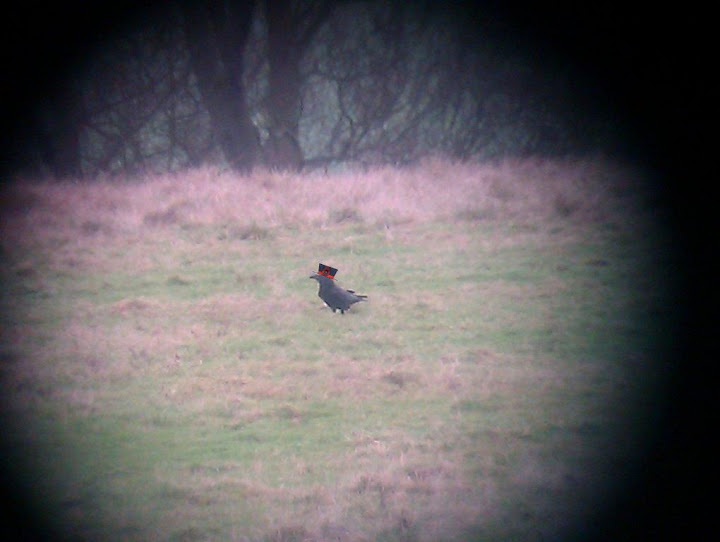 Barely classifies as a photo, but shows the key diagnostic feature

So, bird finding, not bird twitching. Distance from home, as the Raven flies, about nine miles. A London tick, and also an Essex tick. Win win. Though also a year tick, so a "lose" for that one I suppose. Did I say Coots and Squirrels? Sorry, I meant Buzzards and Ravens.

Posted by Jonathan Lethbridge at 16:54