Day five and Mick is restored, 24 hours asleep has done him the world of good and we can continue birding. Riva is on the Black Sea coast, and we had chosen to stay there as of all the spots around Istanbul it seemed to offer the best chance to increase the list. This was very much a birding trip, rather than concentrating on photography. The beach wasn't up to much, fishermen covered every spot of sand even first thing in the morning, but the reed bed along the river was a lot better with Kingfishers, Cetti's Warblers, Water Rails and so on, whilst Marsh Harrier and Hobby hunted above. Bird of the morning spot went to a Short-toed Eagle cruising overhead (little did we know) and in the scrub above the road there were Sardinian Warblers, Blackcap, and Long-tailed Tits.

Our main destination was the watchpoint of Toygartepe - there are a number of spots along the Bosphorus that come into their own during migration season. In the spring you position yourself on the western side and look east, and in the autumn it is the other way around. Toygartepe is the northern watchpoint, with panoramic views of the final bridge all the way around to the city of Istanbul to the south. We found the right spot at the second attempt - my pin had been set on the right hill but at slightly the wrong location, just underneath where we wanted to be. A friendly café owner put us right and we were soon in place with the scope pointing west. It was breezy, and there were no other birders - this was disappointing as we felt we would need help!

For the first 45 minutes nothing happened. We wondered if we had completely misread the forecast, and that this was the reason for there being nobody here. Were there huge crowds at the southerly watchpoint? Or were all the vizmiggers taking a day off knowing that the conditions were suboptimal? Three days previously there had been thousands of birds streaming through, today there were none. 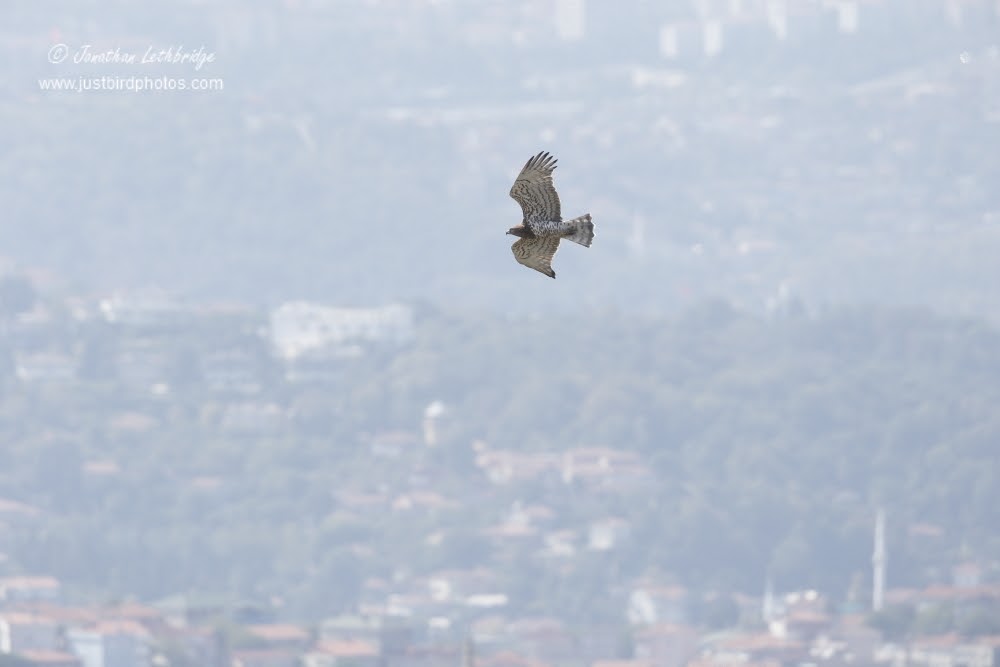 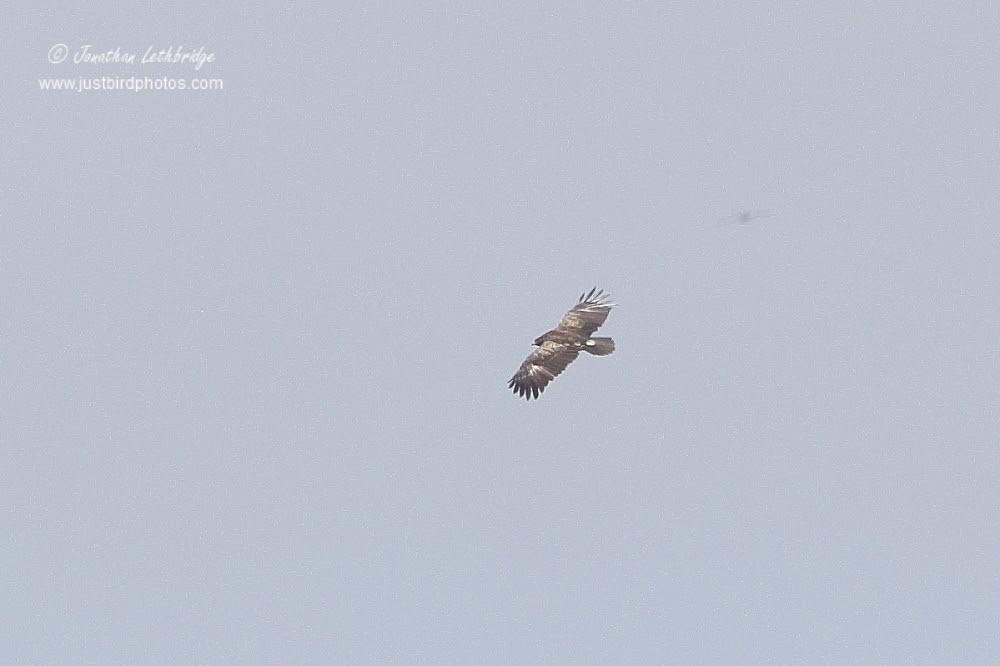 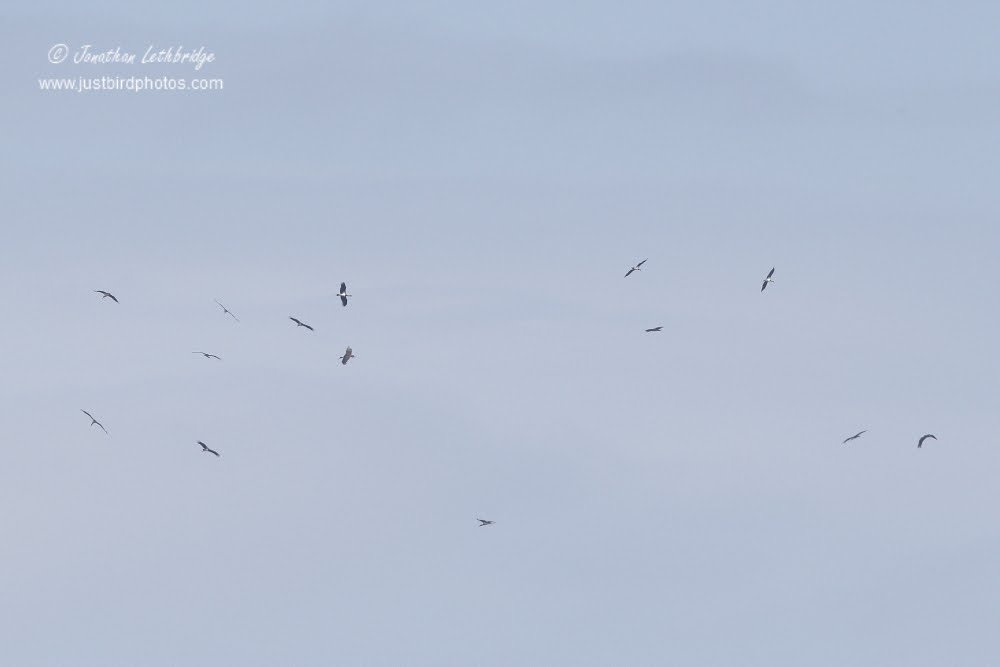 We need not have worried. A Short-toed Eagle appeared mid-morning, followed by what we thought was likely a Lesser-Spotted Eagle. As birders who rarely see large birds of prey this was sensational, and we congratulated ourselves on having made a great decision to come here. Then the floodgates opened and for the next two hours we simply did not know where to look. Birds were arriving from Thrace on a broad front, passing north and south of us. Those to the north would circle slowly upwards in an immense spiral as they hit the bridge area, and once enough height had been gained to see the way forward, would peel off in a line and bomb across into Asia. South of us appeard to be more of a steady stream, but was equally impressive. Relatively few birds passed directly overhead, and for a while we wondered if we ought to move to the north for a better position, but with local knowledge lacking we stayed put. Toygartepe must be the best spot for a reason. Looking back it is a bit of a blur, birds were impossible to count with any accuracy, especially Lesser-spotted Eagle which came over in such numbers that we got to grips with them fairly easily, but most of the time we simply did not know where to concentrate. The following is taken from my eBird list that I tried to maintain as we scanned.

As I said, this may have been a sub-par day with no other observers, but for us it was mind-blowing. Mostly I see zero Eagles per year. The single ST Eagle in the morning over Riva had felt monster, but the count from Toygartepe was, well, I don't really know. There so many large raptors that it would be easy to become blazé about it I suppose. What I do know is that I want to do something like this again - Gibraltar, Batumi, perhaps a return visit to Falsterbo.

After a late lunch we drove to a final birding spot over the bridge, an annoyingly long detour that took us south of the bridge in a huge loop and then back underneath it to the coast at Rumelifeneri. We finally added Yelkouan Shearwater here, bobbing about on the sea like winter auks. A nearby quarry had a Little Owl, and evidence of a Bee-eater colony. We fought our way back to the motorway via the same enormous loop we had done earlier, fought being the operative word - with hindsight I would not recommend this detour, on the map it looks like being no distance at all but it takes ages. 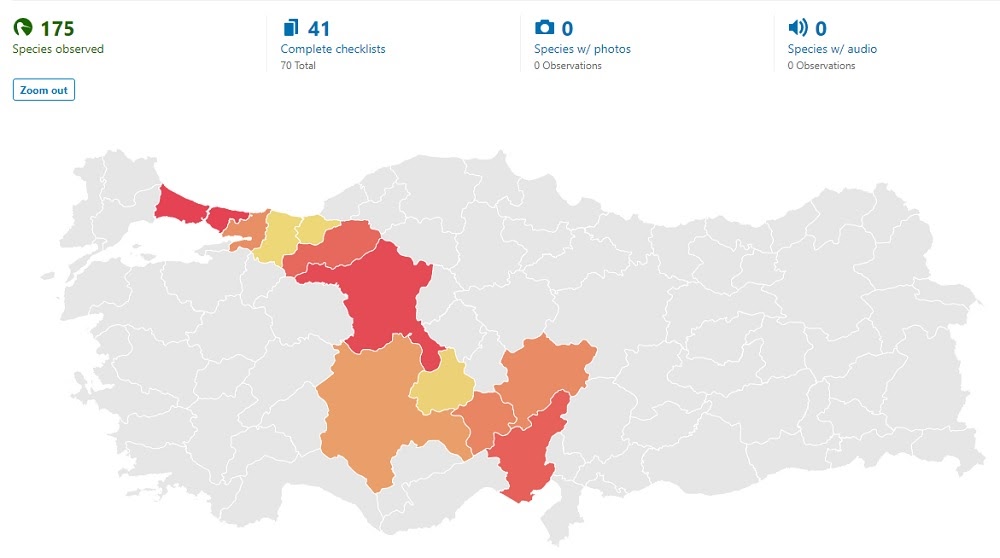 And so that was the trip. The full trip list with locations and species can be found here, but in sumamary we drove halfway across Turkey, around 2500km, during which we saw 166 species. I showed the route at the start of the first blog post, but you can also chart it via eBird, and it looks like this. I am rather obsessed by eBird, and increasingly by this map function where you need to record a bird in the county or state in order to "fill it in". Detours have been known...

Posted by Jonathan Lethbridge at 15:22